The associate justice seems to recognize the danger of digital monopolies in a way few others do. 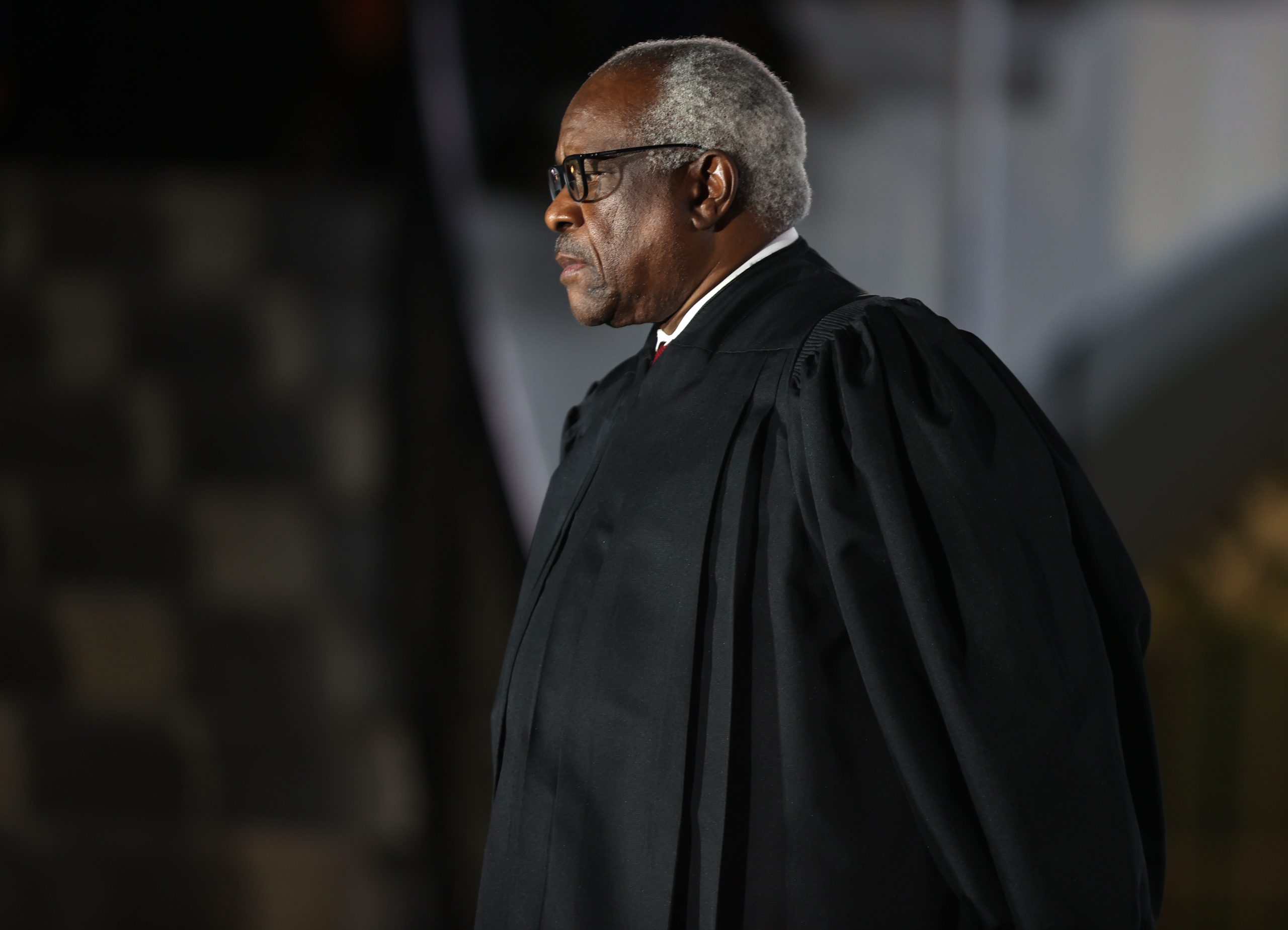 One can usually gauge the extent to which the defenders of Silicon Valley mega-information platforms believe the vast web kingdom of their powerful Sith Lords (Facebook, Google, Twitter, Apple, Amazon) is threatened. Their fear becomes clearer as their howling grows harsher. Supreme Court Justice Thomas, whose dissents, concurrences, and opinion asides on internet issues have grown into an impressive body of jurisprudential work, is one of their favorite targets.

On Monday, in a Supreme Court opinion involving then-President Donald Trump’s exclusion of some users from viewing his Twitter account, Justice Thomas weighed in once again on the broader issues of internet governance and the contours of individual rights. While all of the justices had agreed that the underlying case was moot, Justice Thomas went farther in his concurrence. He suggested that the time may have arrived for a legislative cure to the way that market dominant Big Tech companies exercise a startling degree of control over America’s data and information.

Justice Thomas noted the ironic disparity in suppressive power between a president on the one hand, who blocked a small number of users who wanted to post at his Twitter account, and Twitter, which took down the entire Trump account, thereby effectively blocking his 89 million followers from reading his posts. Justice Thomas wrote,

Today’s digital platforms provide avenues for historically unprecedented amounts of speech, including speech by government actors. Also unprecedented, however, is the concentrated control of so much speech in the hands of a few private parties. We will soon have no choice but to address how our legal doctrines apply to highly concentrated, privately owned information infrastructure such as digital platforms.

The Silicon Valley protectorate pushed back. TechDirt, for instance, was quick to blast the Thomas opinion as “weird,” “bizarre,” and “confusing,” including an uncivil slap at the associate justice’s citation of a legal commentator who has merely “suggested” there are problems with section 230 of the Communications Decency Act. Section 230 is that sacred legislative relic coveted by Silicon Valley because it is responsible for the mostly impregnable castle walls of legal protection that surround tech companies.

At the passage of section 230 back in 1996, Congress could never have predicted the unintended consequences of this law, which protects digital information platforms from most civil liability suits. Over the years, and freed from the limitations of legal responsibility, some of those small technology acorns were allowed to grow into landscape-stomping tree giants that now more closely resemble the belligerent, magisterial Ents from Lord of the Rings, than the civilized digital information gardens envisioned by 230’s authors. At least J.R.R. Tolkien’s Ents were morally just in their belligerence. The same cannot be said for the Silicon Valley titans.

Take, for instance, Justice Thomas’s separate statement from the Supreme Court’s declining review of a 9th Circuit Court of Appeals decision in the Malwarebytes case in October of 2020. The Thomas statement dealt at length with the failings of section 230, including a reference to another case involving Facebook’s avoidance of legal responsibility for potential complicity in spreading terrorist content that allegedly contributed to the death and injury of Americans. Such troubling results came about, Thomas argued, because lower courts have interpreted section 230 as granting unreasonably broad lawsuit protections for tech companies.

The associate justice cited other bleak anomalies and injustices flowing from 230 where the American tort law system would ordinarily have provided the injured parties their day in court. But with section 230 that rarely occurs if the case involves the content decisions of information technology platforms, whether those decisions involve leaving up scandalous, harmful content or taking down viewpoints they do not like. As a result, those information platforms routinely escape any libel and defamation liability, among various other claims, while newspapers and magazines do not. Claims that those platforms owe a duty of care to its users not to maliciously suppress conservative content are dismissed by courts, often at the earliest phase of the lawsuits.

There is no question that the largesse of section 230’s legal protection has synthetically fertilized the success and monopoly size of Big Tech companies. Google controls about 90 percent of the world’s online search activity. Facebook’s co-founder Chris Hughes has lamented the dominating monopoly power that the platform has since aggregated, writing: “I’m disappointed in myself and the early Facebook team for not thinking more about how the News Feed algorithm could change our culture, influence elections and empower nationalist leaders.” Twitter may be the smallest of the Big Tech giants in terms of revenue, but it has a monopoly over the instant news business among professional journalists. In one poll, more than 80 percent of journalists participating said that Twitter is the one indispensable tool they rely on for the breaking news that then becomes the headlines America reads.

Milton Friedman was right when he wrote in his book Free to Choose, the classical analysis of the relationship between freedom and economics, that “A monopoly can seldom be established within a country without overt and covert government assistance in the form of a tariff or some other device.” Section 230 is such an “other device” of subsidy granted by the U.S. government to tech companies in the form of an unprecedented, almost bulletproof legal shield. It has not only birthed monopolies over information and opinion, it also perhaps explains the arrogance of their CEOs as well.

There have been several rounds of congressional hearings over the course of several years where the heads of Facebook, Google, and Twitter have been hailed into House and Senate committee chambers to respond to sharp, often biting, questioning. Yet their vague, nonplussed, and noncommittal answers ought to tell us something. Following Facebook and Twitter’s abrupt take-down on both platforms of the New York Post’s story on the Hunter Biden scandal leading up to the national election, even the international fact-checking organization, Poynter Institute—an entity that Facebook relies on for fact-checking—was outraged. Its officials questioned whether those two platforms were actually “non-partisan” as they claimed. The CEOs of Facebook and Twitter later issued tepid apologies, but only after the damage was done of course.

Although Google and Facebook now face antitrust investigations, the Biden Administration’s Department of Justice and the Federal Trade Commission leading them are almost certain to avoid the bigger questions about Big Tech’s viewpoint censorship, or news suppression of conservative outlets. Now that Americans get their breaking news on digital devices and internet platforms, there is a real and present danger that our electorate will not be adequately and fairly informed. But traditional antitrust enforcement may not be the solution. Classic theory has defined consumer harm in terms of disadvantages in pricing, or product or service availability—rarely if ever in terms of technological suppression of information, let alone the harm to a constitutional republic when citizens and politicians they support are silenced.

That doesn’t mean, however, that American antitrust principles, which have been around for more than a century, are totally inapplicable. Justice Thomas has provided a foundation for examining the legal and policy issues that must be faced in order to solve the problems of Big Tech’s monopolistic viewpoint control. He has not—and of course will not—get specific, to be sure. But by pointing to the market dominance issue, Justice Thomas has opened a door for discussion.

Why shouldn’t, as an illustration of that discussion, the handful of market dominant Big Tech information platforms be saddled with the obligation to apply First Amendment-type principles to their content decisions? As an adjunct to that rather than through the creation of expansive federal agency oversight, why shouldn’t those free speech principles be enforced by granting a private right of action to ordinary citizens, organizations, or businesses—private attorneys general so to speak—who have been harmed by the bad faith suppressive actions of those monopolies?

After all, the biggest of the Big Tech problems are not about technology in general or technology companies as a species of commerce, but rather, they are about something else: that a handful of online information platforms have, through their monopoly power, aggrandized to themselves the position of arbiter of truth, stifling dissenting voices and possessing the power, in the words of the Facebook co-founder, “to influence elections.”

Craig Parshall is the senior advisor for legal policy and civil liberty at the American Principles Project.