Justice for Assyrians: A Kurdish Perspective

Time to right the historical wrongs against these persecuted Middle East Christians. 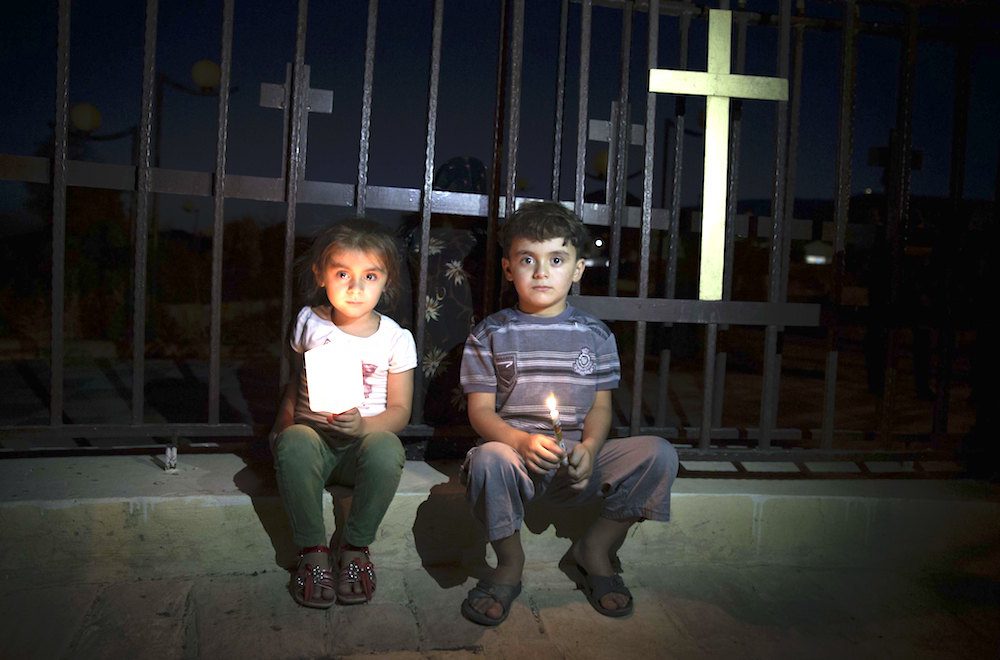 Two young Assyrians sit next to the fence of a huge statue of the Holy Virgin Mary in Koysinjaq, Iraqi Kurdistan, in 2015.Christiaan Triebert/Shutterstock

August 7th marks Assyrian Martyrs Day, a time when we Kurds should focus on how we can help secure justice for the victims of the crimes committed against this persecuted community.

Assyrians, also known as Syriacs and Chaldeans, are an indigenous people of the Middle East, and heirs of the oldest civilization of the region. They are the first converts to Christianity. Their society has nurtured the Christian faith with its own cultural roots, and created original denominations.

However, Assyrians are also the nation that has lost the most territory in the Middle East. Throughout history, they have experienced the most dreadful massacres and genocides. They have severely suffered from persecution as a result of Islam’s expansion by the sword.

For 300 years, Assyrian kings ruled the largest empire the world had yet known. After their empire fell, Arab, Persian, Mongolian, Turkish and Kurdish conquests turned Assyrians into a “dhimmi” community. They became second-class subjects of Islamic states, forced to pay a high jizya tax in order to survive. While the invaders dominated Assyrians, they also found it beneficial for them to turn Assyrians into a dependent society. Assyrians were masters in craftsmanship, creativity, and agriculture. They had a knowledgeable and gifted middle class. The bounty taxes collected from them were critical for the conquerors. They placed Assyrians, a cultured and resourceful society, under their rule while systematically confiscating their property and lands.

The reasons why Assyrians have become an oppressed nation in the face of Islamic expansionism are also worth analysis. A significant reason for this phenomenon is that they are stateless. They were caught unorganized and unprepared in the face of Islam’s violent expansionism. They lacked armies, state structures, central organization, and alliances. Thus, there is a problem of multifaceted internal fragmentation which still continues today.

Historically, the reason for the major decline of the Assyrian population in the region is not only the actions of the Arab, Persian, and Turkish invaders. It includes the severe persecution that Kurds have put Assyrians through for centuries. It was the Kurdish principalities that most heavily imposed the Islamic sovereignty and status of dhimmitude on the Christian communities.

This situation was most visible during the Ottoman Empire, which left Assyrians to the control of Kurdish principalities after an agreement was reached in 1513. In this agreement, Kurds were recognized by the Ottoman rulers as the sovereigns of their own regions. This began the collapse of indigenous Christian communities, including Assyrians.

In villages, Assyrian family life and faith depended on the Church and clergy. Yet economically and politically, Assyrians were under the control of Kurdish principalities and Ottoman administrators. In the cities and towns, the situation was different. Assyrian culture, knowledge and craftsmanship sustained the life of regional cities. Their many skills were seen as a “service” to the empire. This relationship has been falsely idealized by many historians, who often say that Kurds and Assyrians are “peoples who have lived together peacefully for many years.”

As long as the oppressed peoples obeyed this status of dhimmitude, no problems occurred. Official historians in Turkey argue that the so-called provocation of “external forces and especially Western missionaries” led Christian minorities to rebel. They say that the 1839 Tanzimat Edict recognized Christian and Muslim subjects as “equals.” According to official historiography in Turkey, this “caused a deterioration” of the Christian-Muslim relations, for the ruling classes thought that if equality was achieved between Muslims and Christians, they would no longer be able to abuse and oppress Christians or collect the jizya tax from them.

As a result of the national awakening of indigenous Christian peoples, they no longer wanted to pay high taxes and tribute to the oppressors. They opposed the arbitrariness of the rulers. But their demands were met with violence. Their national awakening was unwelcomed not only by the Ottoman-Turkish ruling classes, but also by the Kurdish rulers and landlords.

For centuries, this situation forced the Assyrian people to decrease in number, to assimilate, and to become a dependent national-cultural community within their own ancient homeland. More importantly, they have been subjected to extensive genocidal campaigns.

For example, they were hit hard by the Kurdish Principalities in the region of Bohtan (eastern Anatolia). Over 20,000 Assyrians were massacred between the years 1843-1846. Thousands of women and children were captured. Their property was plundered during deadly attacks which were committed by Kurdish Bedir Khan Beg. Kurds targeted Assyrians who did not want to pay the jizya tax or tribute. In 1918, the Kurdish tribal chief, Ismail Simko, killed Assyrian Patriarch Mar Shimun XIX Benyamin and his entourage. The Assyrians were massacred by Kurds in many subsequent attacks, as well.

The worst genocide committed against Assyrians occurred between 1914-1925 in Ottoman Turkey. It is remembered as “Seyfo” or the “Sword.” The Assyrians resisted and repelled attacks as much as they could. But central Ottoman and local Kurdish authorities did not recognize the Assyrian right to life.

During this and other genocides, it was mostly the Kurds who took the sword and used it against Assyrians. Kurdish society has largely participated in the process of Assyrian annihilation, and benefited from its consequences.

This genocide is not only a “historical injustice” that happened in the past; it is an ongoing crime, a political-social injustice that is still affecting hundreds of thousands of the descendants of the survivors.

Assyrian Christians also suffered as a result of the discriminatory anti-Christian state policies beginning from the early years of the Republic of Turkey. However, the source of persecution against Assyrians was not only the government. Their own Kurdish neighbors perpetually seized their lands and property. For decades after the founding of the republic, Kurdish citizens violated the rights of their Assyrian peers.

The PKK (Kurdistan Workers’ Party) started its armed struggle in 1984 and Turkey formed its own Kurdish “village guard” in response. The Assyrian community was stuck in a triple fire between the Turkish army, the PKK, and the Kurdish village guards. Each party wanted to see the Assyrians on their side. As a result, the Assyrian people, who were unarmed and completely defenseless amid this war, were forced to leave their homes. In the 1990s, Assyrians were again the victims of such violence. Villages in the region were burned, destroyed and evacuated, and political murders abounded.

The armed struggle slowed down in the 2000s and Turkey’s efforts to harmonize with the European Union paved the way for Assyrians to return to Tur Abdin. But this road was filled with challenges. Kurds did not intend to leave Assyrian lands, including those Church properties that they had seized and settled in. And this interim period was short-lived. Once again, the policy of violence reigned in the region as the war escalated between the PKK and the Turkish army. All these things contributed to the collapse of the Assyrian population in the region.

Hence, the Kurds and their political movements have a vital responsibility to right the wrongs of the past and help create a better future for Assyrians.

In order to secure justice for the victims, the Christian genocide that targeted Assyrians, Armenians and Greeks must be acknowledged by the perpetrator communities as well as by relevant political and cultural representatives. This is more than saying that “our ancestors have committed such a crime in the past, we are embarrassed, and we apologize.” Justice requires these individuals and organizations have a serious campaign policy which removes those political gains and societal privileges obtained during the genocide. Such a campaign would relieve the wounds of the victims and their descendants. It would make actual amends.

Social-political relations between Kurds and Assyrians, as well as other victims of genocide, must be restructured in a spirit of equality and justice. Kurdish intellectuals must raise awareness about these issues within the Kurdish and other perpetrator communities. We must initiate a genuine dialogue between Kurds, Turks, Assyrians, and other peoples of the region.

Likewise, the international community (including universities and parliaments) should acknowledge the genocide. The world must also acknowledge the current problems faced by Assyrians and strive towards solutions. In this context, diplomatic activities which further the Assyrian freedom cause is critical.

Today, Assyrians are mostly surrounded by Kurdish communities. As such, the Kurdish political parties and organizations—including the PKK, the Kurdistan Regional Government (KRG) in Iraq, and the HDP (Peoples’ Democratic Party) in Turkey—should assume a historic responsibility. They should help solve the problems of Assyrians and place emphasis on the Assyrian plight as much as on their own political and national causes.

However, if historical facts, historical injustices and losses of persecuted nations are denied, justice can never be secured. Unfortunately, we do not yet see an open and honest acknowledgment of these crimes by Kurdish organizations.

Justice for the genocide survivors’ descendants should include the creation of an Assyrian autonomous administration in Tur Abdin. This area must have a full “special status” as the last religious, cultural, and ethnic region left for Assyrians. It must be supported by the international community through treaties.

The return of the Assyrians to their lands will not be possible unless they are given the assurance of security. In other words, the Kurdish failure to return confiscated properties, and the Kurdish use of violence to keep those properties, should end.

An example from January highlights this need. Two elderly members of the Assyrian Diril family went missing in the city of Sirnak. The lifeless body of Şimuni Diril has been found, but her husband Hormuz remains missing. He has probably also become a victim of murder. These murders are likely meant to frighten Assyrians who remain on their lands and members of the diaspora who want to return.

The HDP should persistently focus on this issue. It does not matter whether those who have committed this crime are pro-government Kurdish village guards or members of the PKK. The actions by the HDP and other Kurdish national organizations are important. Do they provide Assyrians safety for their return and a genuine promise of peaceful coexistence? Or are they enabling the crimes committed against Assyrians?

Similarly, in Iraq’s Nineveh region Assyrians should be given autonomy. Such autonomy should be recognized by the Iraqi Central Government, the Kurdistan Regional Government, and the United Nations. As the genocide in 2014 by ISIS once again demonstrated, if Assyrians are not protected militarily and politically, they face a threat of complete extinction.

Kurds who want national freedom should pursue the freedom and rights of other national, ethnic and religious communities, including Assyrians, as much as they pursue their own.

Recep Maraşlı is a Kurdish author, publisher, painter, and a poet who has been writing about history and politics for over five decades. He was selected as an Honorary Member of PEN International and received many awards. He was prosecuted for his writings and political advocacy and jailed in Turkey for 14 years. He took refuge in Germany in 1999 and has since been living in Berlin.