How Populist Conservatives Can Win in (Yes!) California

The Golden State has long been a hub of progressivism, but the hell wrought by big tech and big government might yet change that. 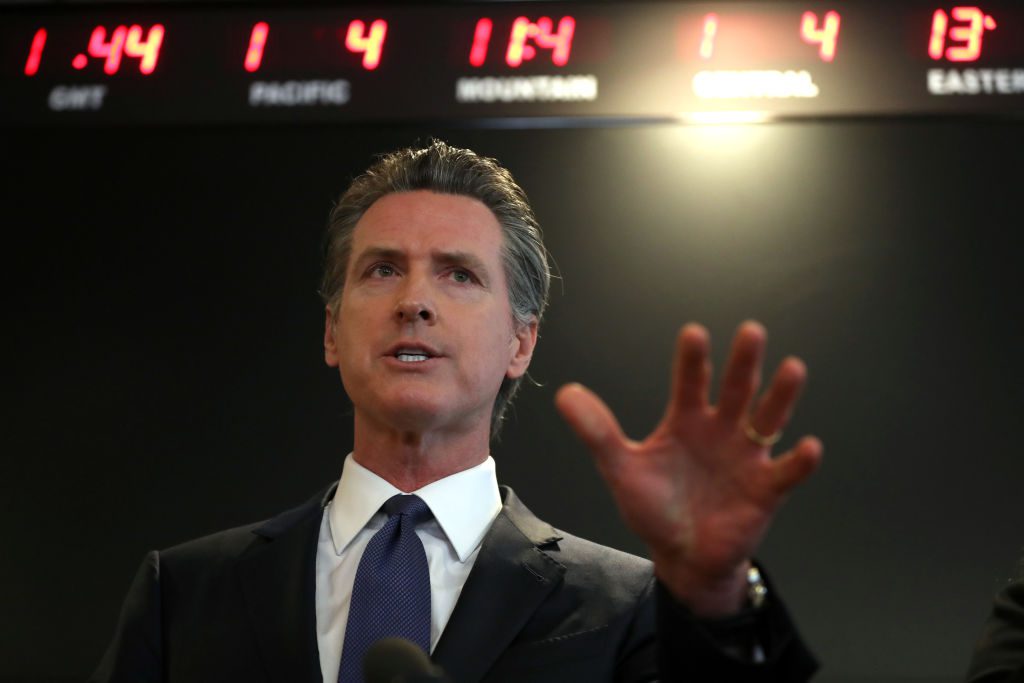 California Gov. Gavin Newsom speaks during a news conference at the California Department of Public Health on February 27, 2020 in Sacramento, California.(Photo by Justin Sullivan/Getty Images)

California bashing is something of an art form. Famous podcasters like Adam Carolla, Ben Shapiro, and even the more liberal Joe Rogan have bemoaned the state’s many failures, and in the case of the latter two, declared a very public breakup with Cali, heading to greener pastures like Texas and Tennessee. It seems that every unemployment statistic, every zany regulation, every story of Californians fleeing the state elicits untold schadenfreude throughout red America.

Yet the spectacle of California’s misrule does not change the realities on the ground. Presidential election results in states like Arizona, Nevada, and Colorado suggest that California’s refugees don’t necessarily repay the favor of (re)entry into the home-owning middle class with votes for the GOP. With or without a completed border wall and with or without a comprehensive immigration reform bill, America’s native-born and white population is declining. That means California’s minority-majority demographics will be—it’s a matter of when, not if—America’s demographics as well.

And beyond that, no matter how many people my state loses, no matter how entertaining it is to bash our politicians, California has 55 Electoral College votes, the most of any single state in the union. Voter ID laws and Electoral College margins aside, the time has come—as the Democrats flip Arizona and Georgia—for Republicans to go on the offensive in enemy territory. To do so would consolidate the great realignment of the GOP begun by President Trump from the party of big business to a multi-ethnic, multi-racial, populist-nationalist workers’ party. The Democrats fear this threat to the status quo, under which they’ve been having their cake and eating it too, calling themselves the party of the people while working hand-in-glove with the country’s media, tech, and globalist business establishment.

Is there hope that these trends will continue? It’s true that California broke big for Joe Biden on Election Day, but a raft of propositions favored by state progressives were also defeated. A ballot measure reinstating affirmative action in the UC system was rejected. Propositions expanding rent control and increasing property taxes on businesses were also defeated. Proposition 22, allowing app-based drivers to remain independent contractors instead of being categorized as employees, blunted the effects of labor laws and judicial rulings meant to redesign the gig economy. Michelle Steele and Young Kim, two Asian-American Republicans, retook Democrat-controlled House seats that had been part of a “blue wave” in 2018. After public outcry over viral videos of California restaurant owners having to shut down, activists started collecting signatures to recall Governor Gavin Newsom. Newsom then abruptly changed course, canceling statewide stay-at-home orders last Monday, arguably to take some of the heat off of himself and redirect it at local officials.

All this suggests fertile ground for a populist GOP message. So too does this fact: the big tech companies against which realignment Republicans love to crusade are mostly based in California.

In hindsight, it was inevitable that big tech’s speech policing would evolve from disclaimers about fake or “disputed” claims by President Trump to censorship and de-platforming. Twitter, Facebook, and Amazon gave the GOP a gift by overplaying their hand. Senator Josh Hawley and other populist-minded Republicans should come to California to denounce big tech at its doorstep. Hawley should give book tour speeches in Silicon Valley and San Francisco highlighting not just the politically correct thought-policing of tech companies but the gross economic inequalities to which these companies contribute. Republican politicians should go to the tent cities and the exurbs of the three-hour commuters of California; they should meet with those sleeping in cars between work shifts and make the case for how and why the “tyranny of tech” goes well beyond speech censorship.

Republicans have nothing to lose by attempting to connect the dots between politically correct software engineers and a decimated working class whose jobs have been outsourced. For every app or smartphone “designed in California” by coders and engineers, there is an invisible foreign workforce building the goods and merchandise. Anyone who’s walked the beaches of Los Angeles during the pandemic can see the harvest reaped by California’s tech economy. Instead of a blue horizon, endless freighters wait up to two weeks to offload Asian-made goods that are fueling China’s record trade surplus.

Hawley and others should also speak near the sites of California’s formal industrial glory. In the Los Angeles area, for instance, there is no better backdrop for an America First message than The Citadel in Commerce and The Plant in Van Nuys. Both are former auto plants that have been turned into sacred temples of globalization: shopping malls. Long Beach and Burbank Airports, where Boeing, Lockheed, and McDonald-Douglass once made aircraft, are other reminders of a time when California built things and paid its workers well to build them.

California has some of the highest gasoline and utility prices in the nation. Governor Newsom’s apparent fix to the problem is to ban gas-powered cars by 2035 and mandate renewable energy through cap-and-trade taxes. Add to that a median home price of over $700,000 and California is quickly becoming a two-tiered state—the uber-rich and the class that relies on their largesse for jobs. Instead of denying climate change or pie-in-the-sky fantasies of a zero-emission economy, a nimble California conservatism would advocate for policies geared towards adapting to climate change, such as coastline protection, desalination plants, and forest thinning. Conservatives should also make the case—relentlessly and unapologetically—for nuclear power as an integral part of the “green energy” solution. Because nuclear outperforms renewables on price and reliability, California conservatives would be able to send a message that there is such a thing as a practical environmental policy.

Finally, on the housing front, Republicans should aggressively push deregulation to add housing units. And they should make Democrats own housing costs by pointing out, as urban studies Professor Joel Kotkin has, the unholy trinity of labor unions, large developers, and government bureaucrats artificially limiting the housing supply and driving up the cost of construction.

One of the biggest hurdles to Republican competitiveness in the Golden State, or so we are told, is race. The GOP only appeals to older white voters, not the young and racially diverse. But former president Trump’s gains among minority voters, particularly blacks and Hispanics, shows that demography isn’t destiny for the GOP. With greater messaging discipline than Trump had, Republicans can build upon these gains. The House victories of Steel and Kim (mentioned above), coupled with the rejection of reinstating affirmative action at UC schools, suggest that Asian Americans, who were key constituencies in both electoral outcomes, still harbor suspicions of the old-world communist threat that many of them fled. They distrust top-down, government-sponsored leveling in the name of equality.

Right now, because of a media and culture war monopoly, California Democrats have a framing advantage when it comes to race and politics. Democrats are the party of “anti-racism,” while Republicans, they suggest, are the party of whiteness and institutional racism. How, then, did progressive propositions and House members suffer such repudiations in the last election cycle? The answer is that many nonwhite California voters are less inherently liberal than progressive Democrats would like us to believe. The differences are papered over by willing accomplices in the media, such as the LA Times claiming that the Newsom recall is orchestrated by the fringe right (how could a Democrat possibly oppose a lockdown?) or insisting that young Asian Americans are overwhelmingly in favor of affirmative action.

If Republicans relentlessly pursue a populist message on bread-and-butter issues like housing and energy costs and point out that big tech and de-industrialization go hand-in-hand—that it costs nothing to the offshoring bottom line of Silicon Valley to embrace slogans like Black Lives Matter—then the party may reach an inflection point. Millions of Californians may yet come to understand that the political choice is not between “anti-racism” and white supremacy but woke crony capitalism and economic populism.

Kurt Hofer is a native Californian with a PhD in Spanish Literature. He teaches high school history in a Los Angeles-area independent school.