Home/Articles/Culture/Happy Birthday, Simpsons, But I Wish You Were Dead
Culture

Happy Birthday, Simpsons, But I Wish You Were Dead 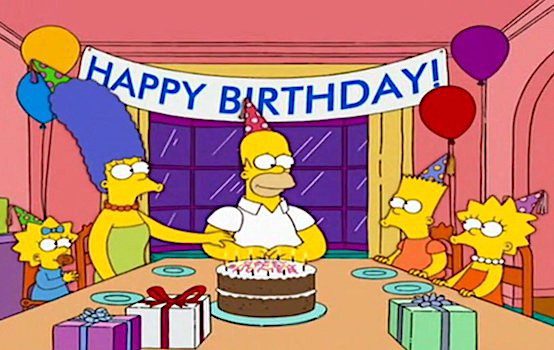 The Simpsons, perhaps the greatest television program of all time, and certainly the greatest comedy program, will air the finale of its 30th season this Sunday, in its 30th year of life as a standalone sitcom. For almost three decades, Homer, Marge, Bart, Lisa, Maggie, and their dozens of friends and acquaintances have been iconic features of American life.

This might seem like cause for celebration, but it is not. The Simpsons wasgetting worse at least 20 years ago and by now it is a shambling embarrassment to its former self. Watching it or its advertisements is like observing an old friend destroying himself. “Get help,” you want to say. But you know it is futile.

What made The Simpsons so great? Strong characters, strong stories, and strong jokes, of course, but this no more captures its triumph than saying that a woman’s nice face captures her charm. The characters were exceptionally varied yet exceptionally rich. The stories were absurd, yet somehow close to home. The jokes came thick and fast without seeming contrived. Everything grotesque and lovable about American life was there, circling an unheralded lower-middle-class family that exposed the truth of G.K. Chesterton’s claim that “the most extraordinary thing in the world is an ordinary man and an ordinary woman and their ordinary children.”

What went wrong? How did The Simpsons go from such heights to its current product, which the critic Charlie Sweatpants calls “Zombie Simpsons”? Perhaps the most elegant explanation is that the writers ran out of ideas. Even as fantastic a cast of characters as The Simpsons has its limits, and as the program dragged into the 2000s, the potential of the secondary characters was exhausted. How many times can the surly barman Moe ruin another relationship? How many times can the devious billionaire Montgomery Burns appear to change his ways? The death of the great Phil Hartman and his timeless characters Lionel Hutz and Troy McClure only exacerbated this creative dearth.

Yet the creators also misused the characters they had. As the eccentrically named Sweatpants details in his analysis, the dim but essentially lovable paterfamilias Homer became a raving lunatic, with a narcissism tempered only by occasional bouts of inexplicable sentimentality. When his foolishness led to the death of harmless irritant Ned Flanders’ wife Maude for example, he blunderingly tried to make amends by hooking him up with a new woman.

The jokes declined as well. They had once come with such frequency and quality that it was like a maestro conducting an orchestra. As the show dragged on, however, improbable references, absurd pronouncements, and lame puns made it appear as if an overcaffeinated teenager was trying to play Led Zeppelin on the ukulele.

A parade of uninspired celebrity cameos further cheapened TheSimpsons’ stock. Once, celebrities had appeared to enhance stories, such as when the Smashing Pumpkins swung by, allowing Homer to drop the immortal line, “Thanks to your gloomy music, you’ve stopped [my children] dreaming of a future I can’t possibly provide.” Increasingly, though, celebrities took over the episodes as if they were little more than vanity projects. Lady Gaga’s laugh-free appearance was the worst. If watching The Simpsons had become like sitting next to a smelly old man on a bus, this was like sleeping in a pigsty.

Why is The Simpsons still on the air? Viewing figures have declined from more than 20 million to less than five. To be sure, not all of that is due to its artistic failings. Viewers have a lot more options in 2019. Still, the average Simpsons episode is being watched by more than four times fewer people than the average episode of The Big Bang Theory, for heaven’s sake, a show which is to humor what a knee to the crotch is to polite introductions. Nobody involved in The Simpsons’ creation can possibly imagine that they are doing a good job, or that each hackneyed episode is not degrading their legacy. They’re like an old boxer who with each pathetic performance helps the audience forget he ever had glory days.

Yet somehow, TheSimpsons‘ brand is strong enough that it keeps making money for Fox Broadcasting Company. It has become enough of a cultural institution that an audience keeps tuning in regardless of the quality (perhaps some of the viewers enjoy the show but I charitably assume that much of the appeal is nostalgia and brand recognition). And so long as it continues to generate revenue, it is unlikely that the studio will replace The Simpsons with original programming. Why roll the dice on what could be a failure when you can plump for comfortable mediocrity? This is the attitude that underpins the avalanche of sequels, prequels, reboots, remakes, and adaptations that have swept through cinemas and televisions in our time. We settle for the bland but profitable over the courageous risk.

A more inspiring path was taken, perhaps surprisingly, by Jerry Seinfeld. When NBC approached him requesting a 10th season of his smash-hit sitcom Seinfeld,he turned down a reported $5 million per episode. According to Seinfeld, NBC presented him with a chart that showed their ratings rising year after year. Did he not want to reach their peak? No, said Seinfeld, because they could see how high their ratings could ascend only after they started to decline. “The most important word in art is ‘proportion,’” he said in a later interview. “How much? How long is this joke going to be? How many words? How many minutes? And getting that right is what makes it art or what makes it mediocre.”

I wish the creators of The Simpsons had learned Seinfeld’s lesson. People sometimes talk about going back in time and killing baby Hitler. If I could go back in time and enter fictional realms, I would drive a bulldozer through 742 Evergreen Terrace.