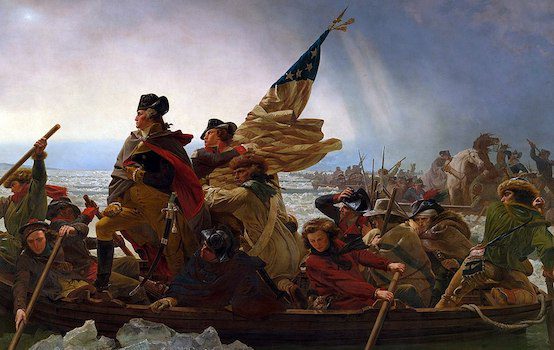 The first thing one notices about R.R. Reno’s new book, Return of the Strong Gods: Nationalism, Populism, and the Future of the West, is the dust-jacket photograph. It’s a classical statue of a warrior-angel, sword in his hand. The message seems unmistakable: This is a heavy book about fearsome themes.

Yet anyone thinking—or hoping—that this book will be a hymn of praise for, say, the Roman god Mars, or Conan the Barbarian, will be disappointed.

As Reno writes, “By ‘strong gods’ I do not mean Thor and the other residents of the Old Norse Valhalla.” Instead, he lauds the strong gods of “love and devotion, the sources of the passions and loyalties that unite societies.” Continuing in that irenic vein, Reno adds, “Truth is a strong god that beckons us to the matrimony of assent,” adding that strong gods “can be traditional…the American Founding is a strong god worthy of our devotion.”

Yet at the same time, Reno concedes that “strong gods…can be destructive. In the twentieth century, militarism, communism, racism, and anti-Semitism brought ruin.” So we can see that in the author’s view, strong gods are prime movers—the demiurges that inspire us to take action, for good or ill.

Thus while Reno’s strong gods are beneficent, that’s not true of all strong gods—and none of them should be trifled with.

So as we weigh risk and reward, we might be tempted to ask: Do we want strong gods in our midst? Would weak gods be preferable?

Answering that question is the task Reno takes up, and it provides, yes, a brooding, even primordial, backdrop to his tome. Indeed, World Wars I and II serve as his cataclysmic predicate:

The violence that traumatized the West between 1914 and 1945 evoked a powerful, American-led response that was anti-fascist, anti-totalitarian, anti-colonialist, anti-imperialist, and anti-racist. These anti imperatives define the postwar era.

Indeed, the world wars, and their associated isms, were so horrible that it evident that some sort of collective postwar course-correction was needed. And yet at the same time, we must remember that not everyone in the first half of the 20th century was guilty; there were plenty of good guys, as well as bad guys.

Thus we come to the heart of Reno’s argument: The Western elites went from correction to over-correction. And in that over-correcting, the virtues of the strong gods were lost, or at least exiled. Reno sums up the thinking, after 1945 and to this day, of the great and the good:

Their aim is to dissolve the the strong beliefs and powerful loyalties thought to have fueled the conflicts that convulsed the twentieth century.

And how will the elites go about dissolving the strong beliefs? The strong gods? With openness, that’s how.

Reno thus warms to his theme: He starts with the emigre philosopher Karl Popper, who, in 1945—even as the embers of war still burned—published The Open Society and Its Enemies. Popper’s two-volume work is an extended attack on “closed” thinking, going back all the way to Plato. Such closedness, in Popper’s view, was the prelude to intolerance, even totalitarianism. Comments Reno on Popper’s gist: “The imperative is bracingly simple: Never again.” Indeed, given the enormity of the wars and the death camps, we can detect a note of sympathy in Reno’s voice.

Yet there’s no sympathy when Reno sums up Popper’s prescription: “We must banish the strong gods of the closed society and create a truly open one.”

In fact, to Reno’s distress, Popper went further, applying a materialist understanding to the course of events. “Although history has no meaning,” wrote Popper, “we can give it meaning.” And here’s where Reno draws his brightest line, because he is an unabashed—albeit, at the same time, measured—defender of Western Civilization and the Judeo-Christian tradition. Thus words such as “justice,” “truth,” and “transcendence” dot his text.

Yet in the meantime, Reno chronicles Popper’s dolorous influence: “By the late 1960s and early 1970s, Popper’s open society had evolved to include open marriages, open drug use, and a general conviction that open discussion of the most intimate details of life would bring greater happiness and self-acceptance.”

And yes, Reno is fully mindful that Popper’s ode to the open society inspired one of his students in London in the early ’50s, George Soros. Upon leaving the academy, Soros became a speculator and made many billions; he is has since transferred much of his wealth to his many-tentacled Open Society Institute.

Reno further walks us through a terse but concise guide to other champions of openness, deftly weaving together such disparate figures as Albert Camus, Milton Friedman, Jacques Derrida, Friedrich Hayek, and Norman O. Brown. Of these, perhaps the most impactful has been Friedman, because the Nobel Prize-winning economist helped apply Popperian philosophy to the international economy. Reno argues that the result has been high economic growth—but at an even higher societal price.

To clinch the case that Popper’s ideas have had consequences, Reno cites President George H.W. Bush, speaking to the United Nations on October 1, 1990: “I see a world of open borders, open trade, and, most importantly, open minds.” Those words might seem woozily utopian today, and yet at the time, Bush 41’s rhetoric seemed perfectly unobjectionable and normal—and that’s Reno’s point: in the postwar era, the radical had been made to seem normal.

Indeed, in the three decades since the fall of the Berlin Wall, the radical has become even more radical. As Reno describes today’s zeitgeist: “The one-sided extremism of the open-society consensus—punitive political correctness, undiluted liberalism, and unfettered free markets—has done great damage.”

As one can gather from his disdaining reference to “unfettered free markets,” Reno is an old-line conservative. Such paleoconservatism is quite distinct from the liberalism and libertarianism that has predominated in the open era, even if the distinctions have oftentimes been fudged over. In fact, using vivid language, Reno has been at pains to disentangle conservatism from the fusionism that has sought to blend hawkish foreign policy and libertarian economic policy—along with, somewhere back in the caboose, conservative social policy. Fusionism might have made sense during the Cold War era—Reno writes favorably, in fact, of William F. Buckley in his fusionist heyday—and yet in the decades since, it has become a counterproductive god.

Yet while some paleocons might hanker for the truly old times, Reno inclines toward a distinctly mid-20th century policy vision, which he defines as “markets moderated by government intervention and backstopped by social programs.” Here we see the hand of Harry Truman and Dwight Eisenhower, not Thomas Aquinas or Opus Dei.

Of course, Reno is ultimately less concerned about policy; he is more interested in the metaphysical than the physical. He yearns for a return of “the Western tradition [that] has championed as fitting objects of our love—not only God, but the nation and our cultural inheritance, even truth itself.”

Indeed, putting all his cards on the table, Reno adds, “I am a Catholic. I’d like to see a widespread revival of Christianity in the West.” He argues that traditional faith “can make religious believers stable and stalwart citizens, less likely to be inflamed by ideological causes that are surrogates for true religion.”

Indeed, so true is Reno to his vision that he scorns not only the openness of liberals and libertarians, but also the certitudes of some others on the right. He derides those who draw their conservatism from “the perverse gods of blood, soil, and identity,” seeing them as a throwback to the pre-1945 era. And he also rips those who are “too likely to reduce classical questions of truth, beauty, and justice to the play of economic interests or to speculate about the blind cleverness of selfish genes.”

Yet here it’s possible to note a problem for Reno’s argument. Yes, he’s obviously right in his basic thesis: that the openness of the postwar era has become an emptiness. And yet at the same time, there are plenty of strong gods still on the scene, albeit many of them of a new kind. These Reno acknowledges when he writes of the “paradoxically totalitarian culture of openness and weakness.”

Yes, there’s that strong god of political correctness, and alongside it, all the associated devils of domineering and dictatorial thinking, made all the stronger by new kinds of technology. Indeed, this author has speculated that the next wave of tyranny will be rooted not just in the human mind, but also in the computer mind.

Can Reno’s strong gods withstand the onslaught of the cyber gods? Can the old gods repel the assault of the new gods of Silicon Valley? And beyond the fight against American techsters, will the old truths be able to thwart, say, the Chinese Social Credit System?

For the faithful, there’s hope eternal. Yet between today and eternity, a great struggle looms. So as the tech hordes amass their might, believers must gird their loins, because the 21st century will bring trials to rival the 20th century.