A Culture of Life

The answer to America's abortion scourge isn't to be found in politics. 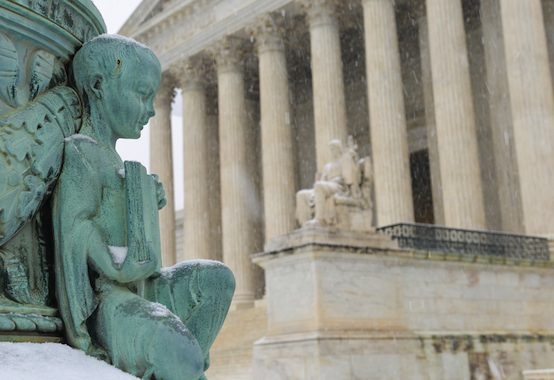 Today marks the 41st anniversary of the national legalization of abortion in the United States. Thousands will march on the Mall and in the streets of Washington D.C. in protest of this decision, braving frigid temperatures and a blanket of snow to express their profound moral objection to Roe v. Wade and lamenting the estimated 55 million young lives that were legally extinguished since January 22, 1973.

The March for Life has become a rallying point for the pro-life movement, an annual pilgrimage of sorts, especially for young people who gather together to affirm a bedrock belief: the sanctity of human life from conception to natural death. Even amid the overwhelming sense of tragedy and loss that draws them to D.C., in order, it is hoped, to effect a change, there is also a sense of affirmation and even celebration in the company of many others who are also so firmly committed, who gather to defend a belief that is today dismissed and mocked by cultural elites and cognoscenti (including the governor of New York, purportedly a Catholic), who find joy in the fellowship of so many companions who stand for life. As one friend posted on Facebook, “the Tribe is together.”

Amid the widespread sense of shared purpose, there is perhaps little time or inclination to reflect on a question: why gather, as Marchers do, in Washington D.C.? It is perhaps a question whose answer is self-evident: the March ends outside the Supreme Court, which continues to affirm Roe v. Wade as controlling precedent. It is the location of the president and the Senate, which ultimately has the power to make or confirm appointments to the Court. It is the nation’s media center, where such a protest has the best chance of being amplified to the nation. It is physically laid out to accommodate large protests, with its Mall almost seeming to have been designed for that purpose. It is the nation’s capital, where our elites congregate to make policy and steer the nation. Naturally, if people from all parts of the nation gather in protest of a national issue, it is not only the best place, but the only place.

However, the March’s annual presence in D.C. obscures a number of issues, above all, whether abortion is ultimately a political and even legal matter. On one level, inescapably so: it has been a political matter for decades, even a “wedge” issue that has become a defining difference between the two political parties. It is obviously a legal issue, generating countless pages of legal theory and philosophical argument, as well as scores of subsequent High Court and even more lower court decisions that have responded to ongoing challenges and debates over the issue. So perhaps no further thought is necessary—destination D.C.

However, by other considerations, treating it exclusively as a political and legal matter obscures the extent to which it is most fully a question of culture. And, if conservatives would generally tend to agree on one thing—aside from the immorality of abortion—it is that culture does not originate in Washington, D.C., or at least that it shouldn’t.

Imagine that today’s March changed the mind of one or two justices and as a result the Court were to overturn its 1973 holding as poorly reasoned and wrongly decided (both true). This would have the effect of allowing states once again to set up their own laws governing abortion. Some states would quickly enact a series of prohibitions or limitations, from outright banning of abortion to severe restrictions on its practice. Other states, one supposes, including some of the most populous such as California and New York, would almost certainly maintain near-limitless permission to abort children. It’s quite possible that the number of abortions would be reduced as the practice was outright banned or severely restricted in some parts of the country, but it’s also likely that those with means would simply travel where abortion would be legal, and even possible that the pro-choice movement would provide funding to pregnant women of limited means. One certainly can’t predict in advance what would happen, but it’s at least conceivable that as long as some states permitted abortion on demand, that the number of abortions would hardly drop.

On the other hand, imagine that seven (or even just four) justices remained convinced that Roe v. Wade should remain the law of the land, but that American people’s view of abortion was transformed—that it came to be widely accepted that abortion was simply wrong, that it came to be widely held that it was the taking of an innocent human life, the brutal murder of the weakest and most needy among us. Abortion would remain officially legal but increasingly unpracticed—indeed, unthinkable as something a civilized person would do.

These are not necessarily mutually exclusive scenarios, but given a choice between the two, I’d hastily accept the latter. I wouldn’t care whether Roe v. Wade were ever overturned if America embraced a culture of life. Following such a change of heart, it would matter far less to most people whether Roe were overturned; it would seem more a period at the end of a sentence than the necessary pre-condition to a cultural transformation.

Law and culture are interrelated in complex ways, but by and large, the pro-life movement has reduced that complexity to the following assumption: culture follows law.  I suspect that this is at least partly true, but also partly wrong—we simply need to look at instances like Prohibition to know that law can sometimes be promulgated in contradiction to culture, which ends up creating an effectively lawless society.

But what of the opposite—can there be a culture in which law is not reinforcing? It’s difficult to imagine such instances since law almost always seems to exist to reinforce cultural norms, but one example has stayed with me because it was such a singular instance. In 2002, some may remember, there was a horrific discovery that a crematory in Georgia had failed to cremate over 300 corpses, and instead had strewn the bodies around the crematory’s grounds. An article in the New York Times described the prosecutor’s conundrum: there was no law on the books against failure to perform cremation by which the owner could be directly prosecuted. As the prosecutor stated to the Times,

‘This is something you really don’t sit down and conceive of,” said Herbert E. Franklin, the district attorney of Walker County in northwest Georgia, explaining why he could file only misdemeanor fraud charges against the operator of the crematory….  ”There are laws against desecration of graves, desecration of bodies that have been interred, but this is just something you really don’t contemplate having,’

The article went on to describe efforts by the Georgia legislature (and, subsequently, the legislatures of more than a score of other states that also lacked such a law) to pass a law that would allow prosecutors to bring felony charges in the event of any such future horrific instances. But what struck me when I read this article was that until that occurrence, no law existed because the behavior was inconceivable. People simply didn’t do that sort of thing. They didn’t do it not because there was a law (there wasn’t), but because that’s not what people do. A broad set of unspoken and even unexamined norms existed that made an explicit law banning what had happened in Georgia wholly unnecessary.

Ideally, law and culture coexist peacefully together. Most people don’t murder other people not because it’s illegal but because they share a fundamental belief that it’s wrong. So understood, law often exists primarily not to prevent people from doing what they wouldn’t do even in the absence of such laws but to enable society to punish lawbreakers.  A legal regime relies considerably, if tacitly, on the healthy existence of a deeply shared set of cultural norms.

Thus, it is especially when a shared culture begins to unravel, when division and disagreement and rejection of cultural norms become prevalent, that the temptation arises to increase legal regulation, enforcement and surveillance. It is thought that law and enforcement can substitute for broadly shared cultural norms. Society usually finds out that they can’t (as, for instance, it is now finding in the case of marijuana).

So imagine that one or two justices switched their votes and this term concluded not only that Roe v. Wade should be overturned but that the Constitution’s protection of due process extended to the unborn. Would we have a culture of life? Would it change the hearts and minds of our countrymen? I would indeed wish for that happy scenario, but I am skeptical. We live in a society which prizes autonomy and enshrines the idea of Lockean property, including Lockean self-ownership, understood as an inalienable right that gives us the right to dispose of “our persons and property as we list.” We embrace the liberty of persons to pursue individual self-realization, increasingly to the detriment of future generations, born and unborn. We live not in a culture of life, but what Pope Francis has accurately called “a throw-away culture.” We are all implicated in this culture—Left and Right alike. The Left, particularly when it comes to their Lockean behavior in the claim to non-negotiable ownership of their bodies; the Right, in their Lockean belief that anything in the world is theirs for use and disposal for the ends of immediate profit. Many of those marching also might have cheered when Sarah Palin chanted “Drill, baby, drill,” implicitly claiming that we, who happen to be alive now, own the finite resources of the earth—just because we were here first. I don’t mean to suggest that there is a moral equivalency to aborting children and drilling for oil; I merely seek to point out that Americans are generally Lockeans in some form or another, and that the accompanying pervasive individualism, avarice, hedonism and presentism makes the sustenance of a comprehensive culture of life difficult if not impossible.

Most of today’s Marchers would dominantly self-describe themselves as conservative, and in many settings would express nothing but contempt for D.C. But “our Tribe” returns there every year, believing in the cause and wanting fervently to stand up for the weak and defenseless. In the absence of a change of culture, a change in the legal status of abortion will likely end up fostering a scenario abhorred by most conservatives—an increase in laws imposed on a restive population, requiring expansion of police and surveillance. Absent a change of law, but achieving a change in culture, it’s possible to imagine a world in which taking the life of an unborn child is something “you don’t really contemplate having.” At its best, the March for Life is the effort to change the culture, even if its self-presentation seems aimed at political and legal change. But those working for life should be clear, with themselves and their countrymen: Washington, D.C. is just a convenient place to gather, but not the origin from which a culture of life will arise. The real change to be effected is everywhere, and if successful, D.C. will be rightfully far less important than we make it out to be today.