Why Millennials Long for Liturgy

Is the High Church the Christianity of the future? 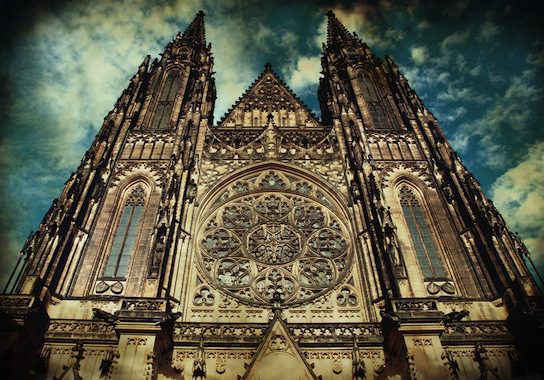 America’s youth are leaving churches in droves. One in four young adults choose “unaffiliated” when asked about their religion, according to a 2012 Public Religion Research Institute poll, and 55 percent of those unaffiliated youth once had a religious identification when they were younger. Yet amidst this exodus, some church leaders have identified another movement as cause for hope: rather than abandoning Christianity, some young people are joining more traditional, liturgical denominations—notably the Roman Catholic, Anglican, and Orthodox branches of the faith. This trend is deeper than denominational waffling: it’s a search for meaning that goes to the heart of our postmodern age.

For Bart Gingerich, a fellow with the Institute on Religion and Democracy and a student at Reformed Episcopal Seminary, becoming Anglican was an intellectual journey steeped in the thought of ancient church fathers. He spent the first 15 years of his life in the United Methodist Church, where he felt he was taught a “Precious Moments” version of Christianity: watered down, polite, and unreal. His family joined a nondenominational evangelical church when Gingerich was 16. Some of the youth he met were serious about their faith, but others were apathetic, and many ended up leaving the church later on.

While attending Patrick Henry College in Virginia, Gingerich joined a reformed Baptist church in the nearby town of Guilford. Gingerich read St. Augustine and connected strongly with his thought—in class from Monday to Friday, Gingerich found himself arguing for ideas that clashed with his method of worship on Sunday. Protestantism began troubling him on a philosophical level. Could he really believe that the church “didn’t start getting it right” till the Reformation?

The final straw came when a chapel speaker at the college explained the beauty of the Eucharist in the Anglican service. Gingerich knew this was what he was looking for. Soon after, he joined the Anglican Church.

For high-school English teacher Jesse Cone, joining the Orthodox Church fulfilled a deep yearning for community and sacramental reality. Cone grew up in the Presbyterian Church of America, heavily involved in youth group and church activities. While attending Biola University, an evangelical school in southern California, Cone returned home over the summers to help lead youth-group activities. He was hired as a youth pastor and “even preached a sermon.” But at Biola, Cone struggled to find a home church. There were many megachurches in the area that didn’t have the “organic, everyday substance” Cone was seeking.

He began attending an Anglican service, drawn to its traditional doctrine. He was a “perpetual visitor” over the next few years. A Bible study on the Gospel of John pushed him further towards the high church. Reading through the book with a group of friends, Cone began to notice the “conversational and sacramental” way Jesus related to people. “There’s a lot of bread, and wine, and water,” he says. From Jesus’s first miracle—turning water into wine—to telling his disciples “I am the True Vine,” the mundane, communal ways in which in which Jesus connected with people “confirmed in me a sense of sacramentalism—that everyday aspects of life are important, in a way the modern mindset doesn’t share,” Cone says. “I started looking at the world with more sacramental eyes.”

Cone became engaged to a woman who was also raised Presbyterian. In the weeks leading up to their marriage, they sought a church together, but none seemed to fit. Fundamental questions lingering in Cone’s mind—about church history, the importance of doctrine and dogma, what it means to live a full Christian life—came to a head. He told his wife, “I don’t think I’m comfortable being Orthodox, but I want to at least see one of their services, see what it’s like out there.” The next Sunday, they decided to attend an Orthodox Church with another young couple. By the end of the service, Cone says, “We were just blown away. Just blown away.” The worship, doctrine, and tradition were exactly what they had been looking for. “We were shell-shocked. And we haven’t stopped going since.”

For CreedCodeCult.com blogger Jason Stellman, joining the Catholic Church was an act of religious and intellectual honesty. Brought up in a Baptist church, Stellman became a missionary in Europe for Calvary Chapel after college. When he began studying and accepting Calvinistic theology, he was dismissed from Calvary’s ministry and moved back to the U.S. He joined the Presbyterian Church of America and enrolled in Westminster Seminary in 2000. He and his wife helped start a Presbyterian Church in Southern California some time later.

In 2008, Stellman was introduced to serious arguments for the Catholic faith.  He studied scriptural passages on church authority, the early church fathers, and St. Augustine’s writings on justification. The more Stellman read, the more he was drawn to the Catholic Church. While in Europe, he had attended mass at a cathedral in Brussels and discovered it possessed a liturgical beauty he hadn’t encountered before. Last year, he announced to his church that he was leaving to become Catholic.

Leaving one church for another is not easy. For Gingerich and Cone, the decision was difficult on a family and community level. Many in their old churches expressed confusion and hurt, and some asked rather ignorant, if well-intentioned, questions: “Do you worship Mary?” or “Do you still believe in Jesus?” There began a process of rebuilding trust that continues to this day. Stellman had to tell his church—a church he planted and ministered, and which his family still attends—that he could no longer serve as their pastor.

Yet all three say the high church has presented them with a sense of community they would not have experienced otherwise. For Gingerich, the seasons of feasting and fasting taught him to suffer and celebrate with the church in a way he had never experienced. “I was re-taught compassion,” he says. Cone’s Orthodox family now stretches from coast to coast and has supported him and his wife as they raise their three children. Their priest drives an hour to their house for confession, knowing how difficult it is for them to make the drive. “He leaves the 99 to get the one,” Cone says.

Many Protestant churches have noticed these congregational trends and their loss of numbers. Some are adopting a more liturgical style to draw in younger audiences: the new book Gathering Together, by Christian theology professor Steve Harmon, describes a Baptist denominational move towards a greater liturgical focus. “It represents an increasingly widespread Baptist recognition that our tradition by itself is not sufficient,” Harmon told ABP News.

Gingerich argues that such stylistic treatments dodge the real question: the issues of church authority behind the traditional liturgy. Cone says he sees “a sincere expression of gratitude and study” from his Protestant friends. But, he adds, “When I look at a Protestant service, it lacks the mystery and power of the body of Christ. … The whole life of the church, the prayers of the desert fathers, the blood of the martyrs, is more intimately connected in the Orthodox life than a mere stylistic change that a Protestant church can do.” Yet Lee Nelson, Co-Chair of the Catechesis Taskforce of the Anglican Church of North America, is hopeful that if evangelical churches begin adopting elements of liturgical worship, some of the Christianity’s larger schisms might dissipate. One must wonder, he admits: are churches becoming liturgical because it’s cool or because it’s right? But when a church’s intention is truly worship-motivated, Nelson thinks such changes can lead “closer and closer to Christian unity, and that’s the best part.”

Nelson believes a sacramental hunger lies at the heart of what many millennials feel. “We are highly wired to be experiential,” he says. In the midst of our consumer culture, young people “ache for sacramentality.”

“If you ask me why kids are going high church, I’d say it’s because the single greatest threat to our generation and to young people nowadays is the deprivation of meaning in our lives,” Cone says. “In the liturgical space, everything becomes meaningful. In the offering up of the bread and wine, we see the offering up of the wheat and grain and fruits of the earth, and God gives them back in a sanctified form. … We’re so thirsty for meaning that goes deeper, that can speak to our entire lives, hearts, and wallets, that we’re really thirsty to be attached to the earth and to each other and to God. The liturgy is a historical way in which that happens.”

The millennial generation is seeking a holistic, honest, yet mysterious truth that their current churches cannot provide. Where they search will have large implications for the future of Christianity. Protestant churches that want to preserve their youth membership may have to develop a greater openness toward the treasures of the past. One thing seems certain: this “sacramental yearning” will not go away.