The West’s Sympathy For The Devil 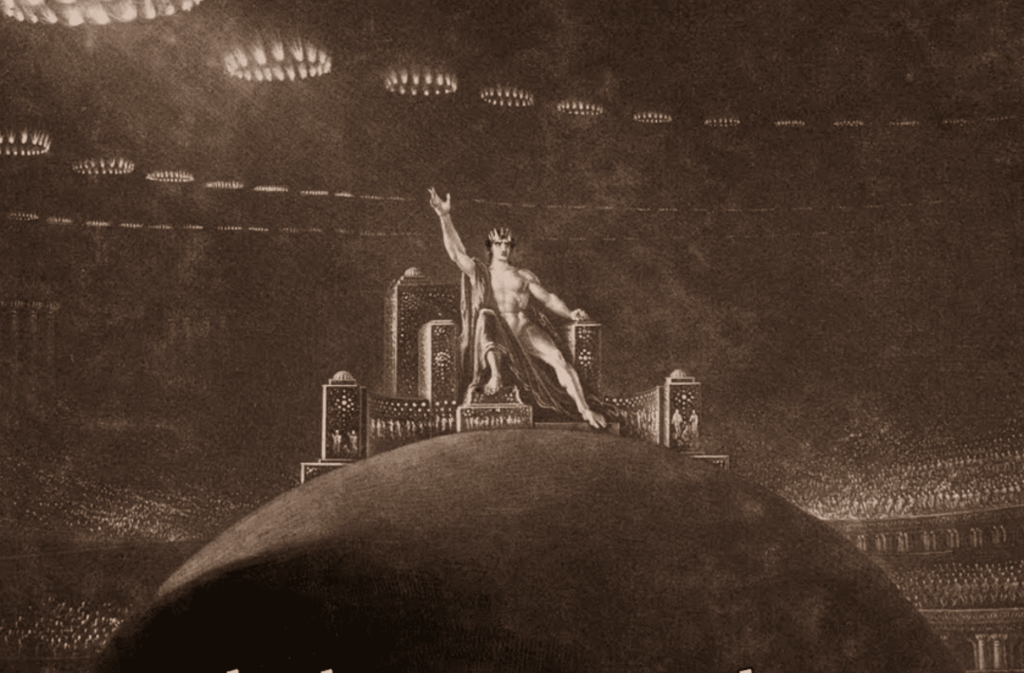 To prepare for my new book project, I am re-reading Iain McGilchrist’s great 2009 book The Master And His Emissary: The Divided Brain And The Making of the Western World.

His basic thesis is that both halves of our brain do different things. The left focuses on abstraction and precision. It takes information that the right brain (intuitive, feeling) gives it about the world outside of our heads, analyzes it, and produces a picture of the world that allows us to operate within it. Neither side can have the full picture of the world as it is; we need both in order to grasp the world, which is ultimately too great for us to fully comprehend.

The left brain is the realm of the scientist, the mathematician, the businessman. The right brain is the realm of the sage, the prophet, the poet and the artist. McGilchrist is not a religious man, but he argues that we in the West have argued ourselves into a state of unreality, into a place where we live by a lie: the lie that there is no end to human life, that there is no ultimate meaning, that there are no connections. Because we live in a culture and civilization thoroughly dominated by the left brain, we have convinced ourselves that the story the left brain tells is the whole truth. But it’s not!

In his forthcoming book, Dr. McGilchrist relates an extraordinary creation myth told by the Iroquois. It has to do with the originators of the world as twin brothers — one a creator, the other an imitator who can create nothing, only work with material his brother gives him. The twin is jealous, and tries to deny the brother’s role, and presence. The jealous brother symbolizes evil in the form of intentional forgetfulness of the higher identity in the spiritual realm. Whenever we forget the divine realm, we make a mess of things. Here is Aleksandr Solzhenitsyn, from his 1983 Templeton Prize address:

Over half a century ago, while I was still a child, I recall hearing a number of older people offer the following explanation for the great disasters that had befallen Russia: ‘Men have forgotten God; that’s why all this has happened.’

Since then I have spent well-nigh 50 years working on the history of our revolution; in the process I have read hundreds of books, collected hundreds of personal testimonies, and have already contributed eight volumes of my own toward the effort of clearing away the rubble left by that upheaval. But if I were asked today to formulate as concisely as possible the main cause of the ruinous revolution that swallowed up some 60 million of our people, I could not put it more accurately than to repeat: ‘Men have forgotten God; that’s why all this has happened.’

What is more, the events of the Russian revolution can only be understood now, at the end of the century, against the background of what has since occurred in the rest of the world. What emerges here is a process of universal significance. And if I were called upon to identify briefly the principal trait of the entire twentieth century, here too, I would be unable to find anything more precise and pithy than to  repeat once again: ‘Men have forgotten God.’ The failings of human consciousness, deprived of its divine dimension, have been a determining factor in all the major crimes of this century.

Today’s world has reached a stage which, if it had been described to preceding centuries, would have called forth the cry: ‘This is the Apocalypse!’

Yet we have grown used to this kind of world; we even feel at home in it.

Dostoevsky warned that ‘great events could come upon us and catch us intellectually unprepared’. That is precisely what has happened. And he predicted that ‘the world will be saved only after it has been possessed by the demon of evil.’ Whether it really will be saved we shall have to wait and see: this will depend on our conscience, on our spiritual lucidity, on our individual and combined efforts in the face of catastrophic circumstances. But it has already come to pass that the demon of evil, like a whirlwind, triumphantly circles all five continents of the earth.

We are witnesses to the devastation of the world, be it imposed or voluntarily undergone. The entire 20th century is being sucked into the vortex of atheism and self-destruction. This plunge into the abyss has aspects that are unquestionably global, dependent neither on political systems, nor on levels of economic and cultural development, nor yet on national peculiarities. And contemporary Europe, seemingly so unlike the Russia of 1913, is today on the verge of the same collapse, for all that it has been reached by a different route. Different parts of the world have followed different paths, but today they are all approaching the threshold of a common ruin.

I bring all that up as prelude to a discussion of this extraordinary essay by Mary Harrington, appearing in UnHerd. She claims that Satanism is the real religion of the United States. Now, before you jump to conclusions, she’s not talking about ritual Satanism. Her point is much more subtle than that. For example:

But if devilish imagery mostly feels a bit cringe, the Devil himself has gone mainstream. If being deliberately anti-Christian pour épater la bourgeoisie feels exhausted, for the new, post-Christian bourgeoisie Satan now reads like the good guy. And in the hands of this class, the Devil’s proverbial pride, self-regard and refusal to yield isn’t just celebrated — it’s on its way to becoming the established religion of the United States of America.

What does she mean? This:

But this doesn’t mean you need to become a devout Satanist to embrace the belief that self-empowerment is our real purpose in life, and that guilt is an unwarranted intrusion. Aleister Crowley wrote in The Book of the Law that “Every man and woman is a star”. And from Rand to Maslow to a trillion “empowering” Pinterest memes today, a variant of this dictum is a core message of the self-help industry.

Self-help writer Julia Cameron, for example, closely echoes Ayn Rand in her 1992 bestseller The Artist’s Way when she declares: “What we really want to do is what we are really meant to do”. Elsewhere, if you want a bit more ritual with your individualism, but the heavy-metal Church of Satan vibe isn’t your thing, there’s the occultism-meets-pamper-day aesthetic of Arin Murphy-Hiscock’s 2019 The Witch’s Guide To Self-Care.

Echoing Crowley, Murphy-Hiscock tells us: “Living as your authentic self means following a very individual path”. If, for instance, you find yourself plagued by inconvenient feelings of guilt as a consequence of doing exactly what you want, Murphy-Hiscock suggests a ritual for “releasing” those feelings.

No wonder the modern Satanic Temple is now (as the Guardian suggested in 2019) hard to distinguish from the liberal “good guys”. At its core Satanism is simply the doctrine of untrammelled individualism, shorn of any link to the divine. To put it another way: Satanists are just very, very liberal.

Milton saw Satan’s refusal to submit to any law (however ambivalently) as the sin of pride. Now, in our post-Christian world of self-actualisation, pride is no longer a sin. Rather, it’s a vital part of becoming fully yourself. As body modification micro-celebrity Farrah Flawless put it: “I do not believe in God, I don’t worship the Devil, but yes I am a Satanist which means I am my own god. I worship myself’.

Indeed, it’s so far from being a sin that sacralised self-worship now has an annual religious festival. This new, increasingly pseudo-religious summer event, simply known as “Pride Month”, may have started out as a twentieth-century campaign for gay and lesbian equality. But what began as a justified and (at root deeply Christian) campaign for equal treatment for gay and lesbian people has long since morphed into a corporate-sponsored celebration of individualism that today horrifies many gay and lesbian people.

Pinterest, the internet’s motherlode of self-help platitudes, succinctly summed up the new faith in an official post this year. As a religious holiday, Pride isn’t about gay rights; it’s where we “celebrate identity and self-expression in all its forms”. Inasmuch as Milton’s ambivalence about rebellion lives on, it’s in the now-traditional argument about whether there are any forms of individual desire still off-limits for proud celebration.

At least on the now majority post-Christian East and West coasts of America, this sacralisation of individual freedom and desire is increasingly assertive in its efforts to expunge Christianity as America’s official faith.

A less overt challenge than those posed by Aleister Crowley or Anton LaVey, but a continuation of the same argument. This time, though, the boot is on the other foot. The side with imperial institutional and military backing is the faith of self-expression, individual will and indomitable pride.

Read it all — there are hyperlinks in the original text.

As I write in Live Not By Lies, Russia in the years before the Bolshevik Revolution had given itself over to sensualism:

People, this is us. This is who we have become. Do not doubt that there will be nemesis. There always is.

A couple of years ago, a young man attended our church for a short time before he moved out of town. He had been involved with a local chapter of Aleister Crowley’s sex cult. He fled that darkness, and became a Christian. He told me once after the liturgy that when you read Crowley’s writings from early in the last century about the kind of world he wanted to bring about through his “sex magick,” and look around you at the world we now live in, it is clear that Crowley succeeded.

The Angel of Light promising that we can be happy if only we assert both our will to pleasure and the domination of nature by the exercise of our will, is no angel, and bears no light. But those who consider themselves enlightened have welcomed him openly; others welcome him with a guilty conscience, but welcome him all the same. And still others welcome him without knowing what they are doing: because they have been catechized by the spirit of the age.

These are the times in which we live. We have to do whatever we can to make sure that they don’t live in us. Even if you don’t believe in a literal Satan, understand that Satan is the archetype for a creature that believes it is and should be entirely self-sufficient, and that the sovereignty of its will (“Do what thou wilt is the whole of the law”) is the primary fact that orients it to the world.