Worse things than jaws lurk in the shoal waters south of Cape Cod. No sooner had Peter Benchley and Steven Spielberg launched the hydraulic shark that upstaged Ted Kennedy as Martha’s Vineyard’s foremost marine predator, than Amity Island faced an alien invasion. The monsters could snap like Velociraptors, and came with table manners to match. Having decimated the island’s small animals, they turned to terrorizing smaller children, breaking the bones of one.

Within a few years they owned the place, forming salt pond flotillas that outweighed a T. Rex. Majestic they may be, but their reptilian contempt for all other creatures makes dreadnaught English swans terrible neighbors .The alpha males can grab feckless mallards by the neck, and with a serpentine flick, whip them clear out of the water. They chase Canadian geese honking down island to manure lawns and manicured golf courses uninvited. 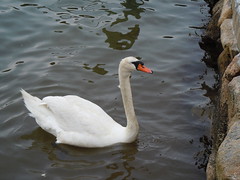 Bird flu was unheard of in 1979, but the swan’s behavior posed an acute threat to such endangered species as the plover and (you can’t make these things up) the Sand Tiger Beetle. Each fall, the Vineyard reverts to what it was before the coming of the Democrats, when Mathew Gosnold discovered the Wampanoag vacationing there in 1602 — a happy hunting ground. Thus it was decided that, once summer people and the Secret Service had departed, these honorary vermin would once again become fair game, and whatever drove the first generation of Euroswans flocking across The Pond, those that lingered ran into a hail of ought-four shot.No matter if they arrived in some strange resonance with the Eurotrash migration, by Thanksgiving 10-Gage goose guns convinced most to get out of Dodge and head for the Hamptons. It wasn’t pretty. Had vice President Cheney been loaded for swan instead of quail, poor Harry Worthington Cheney would have been a goner. The heavy artillery was called for because, on its original owner, a swan’s down vest sheds small shot like Kevlar. Though invasion was quelled, the culinary impact was minimal . Grain-fed, the great white birds were a medieval delicacy, but you are what you eat, and as feral swans favorite fare is the bottom of a pond, they taste accordingly.

Despite repeated inoculation with birdshot, a generation later, thick as bricks and dumb as their dinosaur forebears, the Euroswans descendents are back in force, swarming Edgartown harbor like a 4th of July dinghy parade. Despite the spectacular turnout, the TSA has not lifted a scanner to stop dual citizenship swans from outflanking airport security. Even cygnets lacking their parent’s indelible imprint of America as the next dilatory domicile past Iceland and Goose Bay just up and fly coastwise. Come next Memorial Day, others will follow.

The more lethal strains of avian flu have yet to alight on the East Coast, but thousands of vacationers, human and canine swanning around Vineyard shores have already made deer-tick borne Lyme disease a national health problem. But why worry about avian flu when doomed pet starfish and golden retrievers don’t carry it, and cygnets are hard to get through airport security?

Dream on. Swans don’t go home on Labor Day, they just move south, to Texas, by way of Maryland’s Eastern Shore, leaving other hazards in their wake. Like green fishing hands among the presidential entourage. Along with the bits of mechanical shark still decorating swan nests in the Menemsha reeds one encounters uncountable salt water wet flies, and the odd thousand dollar carbon fiber fly rod chucked by a liability- shy Robert Redford wannabe, fearful of catching an eyeball in a casting frenzy, or frustrated by the most horrifying aspect of Elizabeth Islands marine biology. You are as likely to be swallowed like Jonah by a passing whale than to land a legal striped bass on your first visit, and surfers worry more about submerged boulders than Great Whites—remember the glacial erratic that nearly sank the QE II in the channel between Gay Head and Cuttyhunk?

Apart from a diminutive baby sand shark taking an unseemly interest in his big toe, this author’s only real shock from a triangular fin in Vineyard waters came from the 200 volts delivered by a pizza-pan sized torpedo disturbed at dead low tide in Menemsha. He has a lady witness to this electrifying fish story. Unlike Spielberg’s hydraulic monster the electric ray was real as the great white waterfowl gliding in the background. After many a summer dies the swan, and Bentley is no longer with us, but his up-island literary legacy remains. He knew more than he let on about natural history, and a broad vee of beaks taking aim at a wading fisherman is a sight calculated to leave even a scary movie writer very afraid.

The billionaires in the Democratic Party aren't going to just let Bernie walk away with the nomination.
James Pinkerton February 20, 2020