I have no love for bipolar Jew-hating pop star, but attention must be paid: JP Morgan Chase's move is a meaningful step towards soft totalitarianism 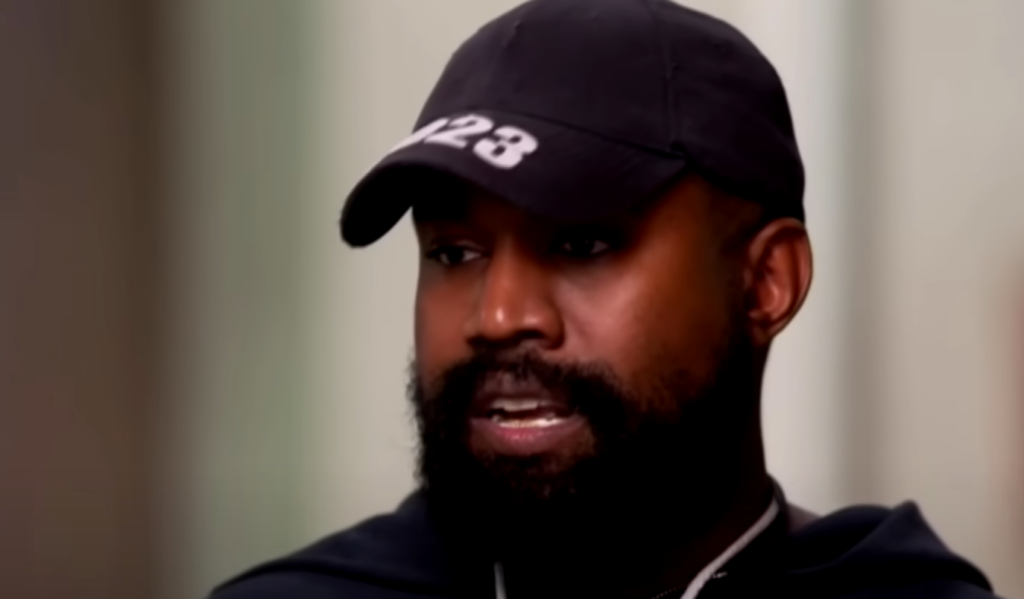 This is very, very chilling:

What Kanye West said about Jews was disgraceful and indefensible. But to de-bank him for it? I would love to see a full roster of JP Morgan Chase's clients, to see what kind of moral monsters a million times more wicked than a mentally ill pop star with ugly opinions about Jews, or who broadcast messages a million times nastier than "White Lives Matter" (which isn't nasty at all, but still), use their services without problems.

Like Candace Owens, I don't care what you think about Kanye West (I'm not a fan), you had better care, and care a lot, about the big bank doing this to him. This is not ultimately about Kanye West. What the bank has done is perfectly legal -- but it's a rudimentary social credit system. We're going to start seeing a lot more of it. I warned you about this in Live Not By Lies:

[C]ompanies like PayPal have used the guidance of the far-left Southern Poverty Law Center to make it impossible for certain right-of-center individuals and organizations—including the mainstream religious-liberty law advocates Alliance Defending Freedom—to use its services.Though the bank issued a general denial when asked, JPMorgan Chase has been credibly accused of closing the accounts of an activist it associates with the alt-right. In 2018, Citigroup and Bank of America announced plans to stop doing some business with gun manufacturers.

It is not at all difficult to imagine that banks, retailers, and service providers that have access to the kind of consumer data extracted by surveillance capitalists would decide to punish individuals affiliated with political, religious, or cultural groups those firms deem to be antisocial. Silicon Valley is well known to be far to the left on social and cultural issues, a veritable mecca of the cult of social justice. Social justice warriors are known for the spiteful disdain they hold for classically liberal values like free speech, freedom of association, and religious liberty. These are the kinds of people who will be making decisions about access to digital life and to commerce. The rising generation of corporate leaders take pride in their progressive awareness and activism.

As of this writing, the global online payments transfer system PayPal refuses to let white supremacist groups use its services. It’s hard to object to that, though First Amendment purists will feel some distress. But PayPal also stigmatizes some mainstream conservative groups. And as we have seen, some major banks now have policies that deny service to firearms manufacturers and sellers—this, even though guns are legal to make and to own under the Second Amendment. Note well that the government did not force these giant financial firms to adopt these policies. What is to stop private entities that control access to money and markets from redlining individuals, churches, and other organizations they deem to be bad social actors from denying access to commerce?

Live Not By Lies came out in paperback yesterday. If you've put off reading it, now's the time. Here is a link to a free, downloadable study guide. You and/or your group will find that helpful. The things I was predicting in 2020, when the book was first published, are now coming true. We are not going to have forever to prepare. Normal people find it so difficult to imagine this stuff happening in America. But it is! At the Lutheran pastors' conference I was at earlier this week, I gave a LNBL talk. Afterwards, a pastor came up to me in the hallway and said that he thought maybe I was exaggerating about Central Bank Digital Currencies -- it sounds paranoid, I know -- but he googled information about it, and discovered that Joe Biden issued an executive order pushing them.

Things people never imagined would happen in America are happening right now, every day. In Michigan this week, I learned that Prop 3, the pro-abortion constitutional amendment on the ballot this November, carries within it something devastating. From The Federalist:

In less than one month, if Proposal 3 passes, children will have a right under the Michigan constitution to walk into one of Planned Parenthood’s 12 so-called “gender affirming” facilities in the state and, without parental knowledge or consent, obtain puberty blockers. And with Planned Parenthood of Michigan promising “gender affirming” care “via telehealth in the coming months,” Michiganders’ kids won’t even need to leave their house to obtain these sterilizing drugs.

Passage of Prop 3 will also give boys a constitutional right to be castrated and girls the right under Michigan’s constitution to be sterilized by way of a hysterectomy or the removal of their ovaries — all without their parents’ consent.

Deceptive marketing by Planned Parenthood and far-left politicians, such as Gov. Gretchen Whitmer, hides this reality from Michigan voters, leading Prop 3 to be uniformly referred to as “the abortion amendment” even though the expansive language of the proposed constitutional amendment reaches far beyond abortion. And on abortion alone, notwithstanding proponents’ claims that “passing this amendment simply restores the same protections that Michiganders had for five decades under Roe v. Wade,” Prop 3 goes far beyond the controlling Roe-Casey precedent: If passed, the constitutional amendment would create an extreme regime in Michigan of abortion on demand, at any time, for any reason, without informed or parental consent, and paid for by taxpayers.

The expansive and legalistically worded language of Prop 3, crafted by Planned Parenthood and left-wing backers, however, extends beyond abortion to create a constitutional right to several aspects of what transgender activists call “gender-affirming care,” despite it being neither affirming nor caring. And Prop 3 extends that right to all individuals, including children.

This is not merely a political point, and it is not a worst-case-scenario argument based on how some liberal activist judge or justice might interpret Prop 3. This reality flows from the plain language of Prop 3 and rests on general legal principles of constitutional construction.

Take a look at this compelling video the Lutherans of Michigan have made to educate voters about what Prop 3 means:

De-banking people, making it harder for them to buy and sell. Passing laws that eliminate parental authority when minors want to chemically or surgically alter their bodies for reasons of gender ideology. This is our country now. We are Babylon. Why are so many of us so damn passive in the face of this evil?

Iain McGilchrist talked on a podcast the other day about how the King of England's ambassador to the Netherlands wrote long, detailed letters back to London, describing Puritan mobs rampaging through cities, smashing statues, burning books, and so forth. McGilchrist said the oddest thing is that these radicals were relatively small in number -- but the streets were lined with spectators who far outnumbered the vandals, who simply watched passively. That's us, you know.

Anyway, for those who want to have a clue about how to live with resilience and integrity through the trials to come, I hope you will consider reading Live Not By Lies -- and then coming together with your local friends, and making plans. I was texting earlier today with a friend in Poland, who told me that he and his friends are starting to do so, in anticipation of civil unrest there.

"Because you're worried about people taking to the streets this winter because they're tired of being cold and hungry?" I asked.

We have been at soft totalitarianism for a long time now. But as they arrest more and more political dissidents (now pro-life activism makes you a target), you need to realize that hard totalitarianism is what is currently forming.

Bogdán Emil
One of my libby friends just told me she cheered the most recent DeSantis stunt. With the refugees. It was a troll move, broadly recognizable as both shocking and humorous--the two key ingredients of effective trolling. Mad props.

Similarly, White Lives Matter was a marvelous piece of thumb-in-your-eye trolling by a licentious uber-artist and longtime attention-whore. I disagree with your assessment that he's "bi-polar." That's an outdated leftist pseudo-scientifically grounded cudgel against people who are overly passionate and free, who usually need a Moral Framework to understand the world if they want to reorient themselves.

This is why lots of crazy alcoholic types go to AA. They go for a moral reconfiguration, not for Scientism, not for psychology. The Higher Power paradigm best describes their situation and reins their passions.

This is why Kanye is a Christian and a Trumpet. He's not bi-polar, he's not borderline, he's not a narcissist, he isn't depressed, he doesn't have uncontrollable social anxiety or trichotillomania, or any other reasonably valid and yet highly, highly Flawed and Incomplete diagnoses.

He's a strange bird, sure, or you can call him any kind of fancy modern slur. He still has moral choices and responsibility.

My point is merely that genuine "bi-polar" as an illness of the brain is being thrown around as loosely these days as demonic possession once was.

I don't want to rule any of it out, but how frequent is the phenomenon, actually? How common is true demonic possession?

I'm guessing it's as common as genuine bi-polar. Truly mentally ill people live in the streets, or asylums. Seriously. This dude lives in Hollywood, and seems just fine.

As an aside, I've known of Kanye since he was in college, because I knew one of his cousins. Kanye's primary failing and sin is obviously his overblown pride, his extreme self-regard as a completely shining free spirit and towering genius of a creative force. Dude isn't mentally ill, he's just full of himself. No. Big. Deal.

Giuseppe Scalas
Swiss banks are the go-to place in these instances.

JON FRAZIER
Ever hear if Chex Systems? It's been debanking the lowly for decades.

Jonesy
I fast forwarded after the first fifteen of the Tucker interview. He’s incoherent and rambling. I don’t know why so much time and attention is being paid to him by conservative media except that it’s desperation to find celebrity with a conservative bent.