Hubris no greater than America’s led Europe to World War I. 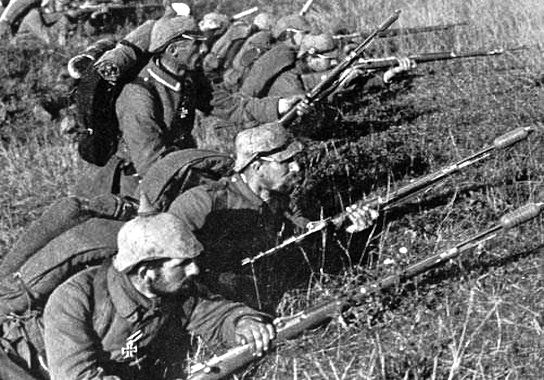 Perhaps no war has been treated more tendentiously—and in recent decades more inappropriately—than World War I. Since the 1960s, a fixed view of that conflict has developed in academic and journalistic circles that places the blame almost entirely on one side. The German government, led by an evil, authoritarian emperor and his bellicose general staff, unleashed a struggle that cost more than 30 million lives and wrought untold destruction on the European continent.

According to the scholar Fritz Fischer—who became the German Left’s darling, despite his background as a loyal Nazi—the war was planned and initiated by a Germany bent on world domination. What other belligerents did to get the ball rolling in 1914, Fischer suggests in his 1961 book Germany’s Bid for World Power, was inconsequential. The rest of Europe was pulled into a struggle that Germany had planned for decades, a conflagration its antidemocratic ruling class and ultranationalist public happily initiated.

Defenses of the Fischer thesis and other versions of the outbreak of the Great War stressing exclusive German or Austro-German responsibility have been driven by moral and ideological considerations. Unfortunately, there are facts that historians until recently tried studiously to avoid. As critics of Fischer’s position were already showing in the early ’60s, his singling out of his own country, already burdened with Nazi crimes, for starting an earlier Euro- pean war was based on questionable investigative methods.

Fischer and his followers ignored what other European countries did to provoke the Great War, unfairly blackened the reputation of German Chancellor Theobald von Bethmann-Hollweg—who tried earnestly to iron out differences between England and his country for at least three years before the war started—and misquoted key German actors in the conflict, such as the Kaiser and the chief of the German general staff.

In recent decades those who write non-prescribed histories dealing with the outbreak of the First World War typically ignore Fischer and like-minded interpreters. Niall Ferguson in The Pity of War, Konrad Canis in his massive three-volume German work on the failures of German diplomacy leading to the “abyss” in 1914, Christopher Clark in The Sleepwalkers, and Sean McMeekin in The Russian Origins of World War One have all produced estimable studies about the Great War that are clearly incompatible with Fischer’s stress on exclusive German guilt.

All the Great Powers behaved rashly, and to their credit the most scrupulous historians do not spare any of the actors on the Allied side. The avoidable disaster of 1914 teaches us, according to Christopher Clark, how the Great Powers “sleep-walked” their way into a war from which European civilization never recovered. Russia in its drive to dismantle Turkey and control the Dardanelles; Britain in its efforts to reduce a rival’s power even at the risk of encircling the German Empire with hostile alliances; Serbia in its attempts to split apart the Habsburg Empire; and France in its desperate desire to punish the Germans for defeat in the Franco-Prussian War all helped stir the pot.

Canis has shown in staggering detail how German foreign policy after the fall of Bismarck floundered for decades. The German Naval Program designed to achieve a 3:5 ratio in relation to the British navy, which was then the world’s largest, was an irritant to British political leaders. It allowed firebrands like Winston Churchill—who became First Lord of the Admiralty in 1911—to exaggerate German hatred for England, which in fact was never particularly great, as Canis documents by looking at the German press.

The German government naively thought it could create a large enough navy to force the British to make an alliance with its fellow Northern European power. The royal families of the two countries were closely related, and the Kaiser believed his British cousins would never go to war with him—indeed, they would seek his friendship— if they couldn’t blockade his coastline.

The Kaiser was wrong. Although Bethmann-Hollweg managed to halt the German naval buildup by 1912, the British government still plowed on and plunged their country into further entangling alliances with Russia against the Germans. The British managed to bottle up the Germans even before the war began and then imposed what was probably an illegal starvation blockade until 1919.

Niall Ferguson argues convincingly that if Britain and the U.S. never entered the war—and even if the Central Powers prevailed after a long, bloody conflict—Britain would have remained Europe’s premier power, blessed with an enormous navy, an extensive empire, and an economic lead over other European countries. No matter the outcome of the war, the U.S. would eventually have become the greatest world power on the basis of its industrial and agricultural wealth.

As it was, American intervention on the Allied (read British) side was always a matter of time. The U.S. government, as historians Thomas Fleming and Walter Karp have demonstrated, was never really neutral. Any crisis that put the Central Powers in a bad light was played up by America’s fervently Anglophile political class. The sinking of the Lusitania by a German submarine in 1915 was not a belligerent act directed against the U.S.: the ship was loaded with arms and other contrabands that were earmarked for the British. The German government had warned Americans and other neutrals not to board the ship because it was a fair war target—as indeed it was.

Already in 1914 the American ambassador to London and a close friend of President Wilson, Walter Hines Page, had announced to British leaders that he would do all he could to bring the U.S. into the war on England’s side as soon as an appropriate pretext could be arranged. No similar assurance was given by Page’s counterpart in Berlin in talking with German leaders.

But Woodrow Wilson and his party were not the major backers of getting the U.S. involved in the bloodbath. Wilson delayed in the face of Republican hysteria about not moving fast enough to stand with England for “democracy.” Today’s neoconservatives are not the first to talk up the “Anglosphere.” One-time Republican celebrities like Theodore Roosevelt, Elihu Root, and Henry Cabot Lodge were demanding in 1914 that we get into a European war we would have done well to stay out of. The GOP’s horrid habits go back a very long way.

President George W. Bush exceeded in his calls for America to liberate the rest of the world any expression of chauvinism from a major European leader on the eve of World War I. But tactless behavior has not produced the consequences for us that it did for the “sleep-walking” subjects of Christopher Clark’s history. We are lucky about where our country is located and how much wealthier and stronger we are relative to other states. What did Bismarck say about God looking after fools, drunkards and the United States of America?