"Conservative internationalism" is a new name for the same old right-wing interventionist follies. 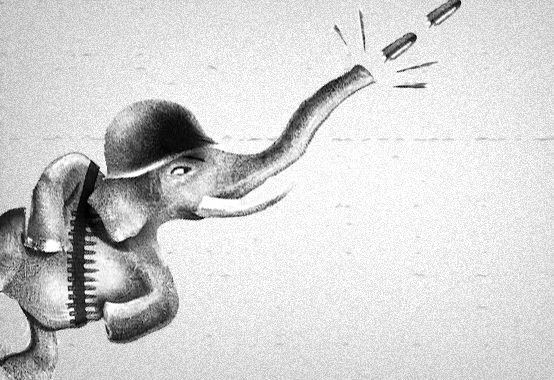 George Washington University political science professor Henry Nau has impeccable timing. He has written a book aiming to, in his words, “fill a gaping hole in the foreign policy literature” with a conservative manifesto that “emphasizes the spread of freedom, armed diplomacy, and a world republic without big government.” This is his pithy definition of “conservative internationalism,” the American foreign policy tradition he wants us to rediscover.

A number of developments make his timing propitious: the Republican Party in particular and the conservative movement in general are in crisis. Eight years of the Bush 43 administration left both in tatters.

Internationally, failed wars in Afghanistan and Iraq have discredited efforts to use America’s unrivaled military capability to construct a balance of power that favors freedom.  Domestically, the worst economic crisis since the Great Depression has done more to discredit capitalism than all the Marxists in the world achieved since the Communist Manifesto rolled off the printing press in 1848.

Indeed, last year a Republican presidential challenger with impeccable business credentials could not unseat a Democratic incumbent saddled with a nearly 8 percent unemployment rate and whom a significant fraction of the Republican base suspected of harboring crypto-socialist views (when he was not praying five times a day in the direction of Mecca).

If we define success as stimulating a fruitful debate about what should be the outlines of a central plank in the conservative agenda going forward, Nau’s book will undoubtedly be a smashing success. If we expect the book to settle this debate, however, or even clearly define its terms, we are likely to be disappointed: Nau offers us old wine (neoconservatism) in a new bottle (conservative internationalism). There are four problems with Nau’s vintage, two that I think are not worth arguing about and two that ought to be the heart of the debate his book helps start.

One issue ultimately not worth arguing about (though I do think it is important) is who is the “real” conservative. This is a definitional matter, and as with all definitions, what counts is whether it’s useful and is used consistently. That the muscular policy Nau describes as conservative internationalism has been the conservative policy since Reagan seems indisputable.  And Nau is consistent in how he uses it.

Were I of a disputatious bent, however, I might point out that Nau’s own definition of conservatism—the belief “that if man cannot govern himself, he has no business governing others”—could be presented as prima facie evidence that his neoconservative or conservative internationalist foreign policy is hardly conservative at all. How can a philosophy that eschews social work at home be committed to engaging in it around the world?

The second issue not worth debating is who the real victim is in foreign-policy circles. Nau himself opens the door to this question, and it is only by dint of Herculean willpower that I resist stepping through it. But Nau’s personal vignettes recounting his travails among the tenured radicals sorely tempt me.

To be sure, Nau hardly exaggerates the leftward political skew of the professoriate. But he fails to leaven his story of conservative woe with the fact that there has been a rightward skew of a similar sort inside the Beltway over the last 30 years—particularly among the foreign-policy and national-security communities—that ought to have heartened a right-of-center academic, especially one like himself who was willing to spend time in government service.

Finally, the most serious provocation I resist is that Nau counts among the oppressors of conservatives in the Ivory Tower my tribe, realists. And it is true that there are a few bastions within it where realism’s writ seems to hold sway. But they are so few and far between that we realists have our own counter-narrative of victimhood. The late Princeton professor Robert Gilpin famously reminded us that “No one loves a political realist.” And the reason we are not loved by our colleagues is simple: we’re regarded as too conservative!

But rather than niggle about definitions or wallow in my own sense of victimhood, I want to focus instead upon two more consequential problems with Conservative Internationalism’s argument.

Nau, in my view, misdiagnoses the problem: the lack of serious engagement with a conservative foreign policy is largely an academic pathology. If I had a nickel for every real-world development my fellow denizens of the Ivory Tower overlooked, I could move out of it and into my own McMansion.

But fortunately, in most cases the real world moves on despite the efforts of those of us in the groves of academe to pretend it doesn’t exist. And in this real world, the “conservative” approach that Nau longs for has characterized American foreign policy with few exceptions since Ronald Reagan. (The brief realist interregnum of George H.W. Bush and his Metternich, Brent Scowcroft, is the exception that proves the rule.) In important respects—particularly the hyper-militarization of the War on Terror—it has continued under the putatively liberal auspices of the Obama administration and would no doubt do so as well if the Clintons took up residence again at 1600 Pennsylvania Avenue.

Having misdiagnosed the problem, Nau prescribes the wrong remedy. Rather than needing to return to the foreign policies of the last 30 years, we need not only to recognize the continuity over this period on what looks strikingly like a bipartisan consensus for conservative internationalism but also to consider the results of having pursued the policies that Nau commends.

To be sure, there were important differences between Reagan and Bush on the one side of the aisle and Clinton and Obama on the other—mostly over the means we should employ to implement American foreign policy. Republicans have been far more willing to go it alone than Democrats, who crave a fig leaf of multilateralism when they use military force to spread democracy and preserve America’s position as “the indispensable nation.” But these differences in tactics should not obscure the larger consensus on strategic ends during this period. Their shared dream has been of a world led by the United States toward ever more political and economic liberalism, a vision that inspired some people to engage in Hegelian flights of fancy about the world having reached “the end of history.”

All of this brings us to the elephant in the room that Nau hardly talks about. I don’t mean that elephant—the GOP—I mean the neoconservatives, about whom Nau says little; what he does say, in his effort to separate himself from them, seems so unconvincing that it leads the reader to look for some deep psychopathology at work here.

Ronald Reagan is one of Nau’s heroes, and George W. Bush was an abject conservative failure. I can’t help but see in Nau’s treatment of them a deep unresolved tension that he can only paper over by, first, arguing that Reagan and Bush 43 were very different politically—and engaging in some rhetorical jiu-jitsu by associating realism with the latter and his vice president, Dick Cheney—and, second, ignoring the connections between the two administrations: the neoconservatives who served in them both.

The laundry list of their names is too extensive and well known to burden the reader with it here. And really, one name suffices to make my point: Paul Wolfowitz, who served in increasingly important national-security policymaking positions under each Republican president of the last 30 years, is widely regarded as the architect of the Iraq War. Indeed, one could go further and show that the neoconservatives were the bipartisan glue—remember, they emerged from the Democratic Party and served also in Democratic administrations—that held together the “conservative internationalist” coalition during this period.

Let me be clear, I do not begrudge Nau those and all of the other accolades his book will receive. What I do object to is his running away from his neoconservative roots. In doing so, he obscures the fact that his formula has been tried before, not only by the good presidents he likes and thinks did well with it—Jefferson, Polk, Truman, and Reagan—but also those other presidents in whose hands conservative internationalism led to wrack and ruin. This is the central weakness of Nau’s argument: it advances a form of conservatism that has been tried and failed already. No wonder neoconservativism is the conservatism that dare not speak its name in his book.