The GOP and the Nuclear Deal Robert Merry warns the GOP against its lockstep opposition to the nuclear deal:

If it survives over nearly unanimous GOP objections, as appears likely, it will be a net negative for Republicans, perhaps even a big one.

I agree with Merry that rejecting the deal will be a liability for the GOP, and its impact will probably be most noticeable in the presidential election. The party’s general hostility to a major diplomatic success will make foreign policy issues more of a problem for the eventual Republican nominee. I assume rejecting the deal will make it very easy for the other campaign to portray both the nominee and GOP members of Congress as dangerous and reckless, and depending on who the nominee is that task could become even easier. There are many Republican voters that favor the deal (between 25% and 40% depending on the survey), so they will almost certainly be left cold by a foreign policy agenda centered around the party’s opposition to the deal and to diplomatic engagement more generally. Considering how fanatical some of the critics’ statements against the deal are, opponents of the deal are probably alarming and driving away voters that might otherwise be willing to consider supporting a Republican for president.

Most surveys showmajoritysupport for the agreement, and more Americans want Congress to allow the deal to proceed than want them to block it. The GOP is on the wrong side of public opinion on the deal itself and their desired tactic of trying to kill the deal in Congress is also unpopular. YouGov’s survey from last week shows the partisan split on the latter question: 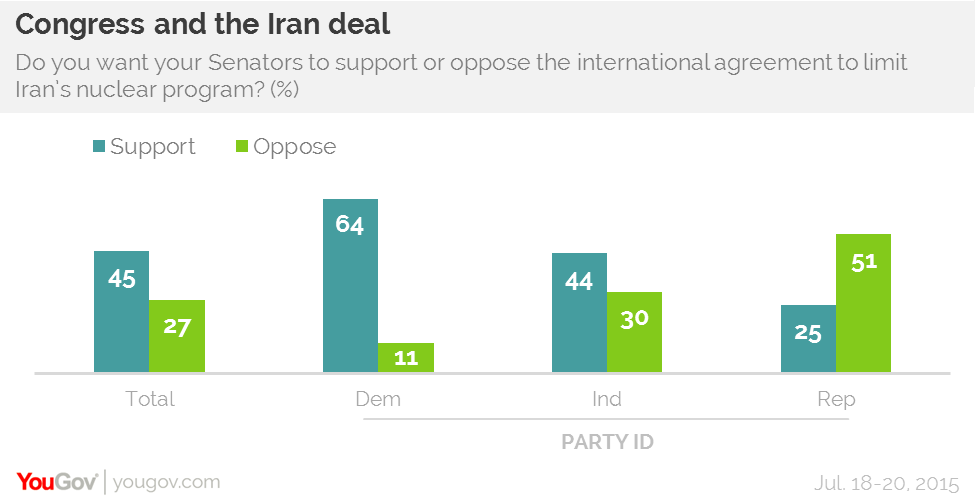 The remarkable thing here is how low opposition to the deal is among Republican voters. There is almost no other issue on which party leaders and pundits are so united, but barely half of Republicans nationally are following their lead.  GOP presidential candidates and members of Congress are catering to hard-liners and donors in their party with their opposition, but their hard-line positions have the backing of barely half of their own partisans. Public support for the deal is likely to grow as it starts to be implemented successfully, and that will likely leave Republicans in a predicament on foreign policy entirely of their own making this time next year.