Sikorski and the “Worthless” Alliance 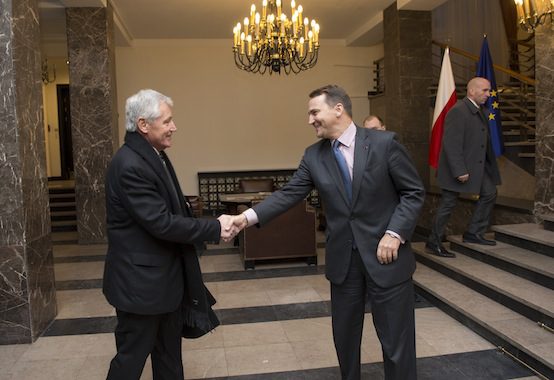 The Polish foreign minister reportedly believes his country’s alliance with America to be “worthless”:

A Polish news magazine said on Sunday it had obtained a secret recording of Foreign Minister Radoslaw Sikorski, in contention for a senior European Union job, saying that Poland’s relationship with the United States was worthless.

Sikorski is welcome to believe whatever he likes, but this is still a fairly extraordinary thing for him to say even in private. The U.S. is committed to come to the defense of Poland. The last three presidents have all visited there and lavished the country with praise at one time or another. One can think of few other European allies other than Britain that receive as much support and pandering from U.S. politicians as Poland. It’s true that the U.S. has also sometimes taken advantage of Warsaw’s eagerness to demonstrate its value as an ally, and that has involved Poland in some of the worst U.S. policies of the last decade, but that underscores the great value that successive Polish governments have put on the alliance. So it is all the more remarkable that Sikorski would say that the alliance “is downright harmful, because it creates a false sense of security.” That raises the obvious question: compared to what? The U.S. alliance with Poland is far and away the most reliable foreign alliance that Poland has ever had. If that seems “harmful” to Sikorski, perhaps he shouldn’t be representing his country’s interests abroad. Or maybe we should conclude that his statement can’t be taken seriously.

It’s important to keep this sort of allied whining in perspective. Whenever officials from an allied or client government make ridiculous complaints like this, there is a temptation to give them more of what they want in order to placate them. When Obama went to Poland and announced his “European reassurance initiative,” Polish officials were annoyed that there was no talk of establishing U.S. bases there. Since it seems that they won’t be getting what they want, we’re now hearing how “worthless” the alliance supposedly is, but Sikorski is probably only saying this now because he knows that the alliance is extremely secure and valuable. Despite the fact that our allies and clients are all security dependents and should be the ones trying to win Washington’s favor, Washington is always overeager to show how much it values them. All that it takes to get American officials to engage in a flurry of “reassuring” moves is to complain loudly about neglect that usually isn’t happening. This is how our allies and clients try to sucker the U.S. into doing things for them that they could and should be doing for themselves. It’s a pattern that the U.S. should be trying to break. Ignoring Sikorski’s leaked remarks would be a good start.