How the Deadlift Will Save Your Life

Lifting heavy, coming back to life. 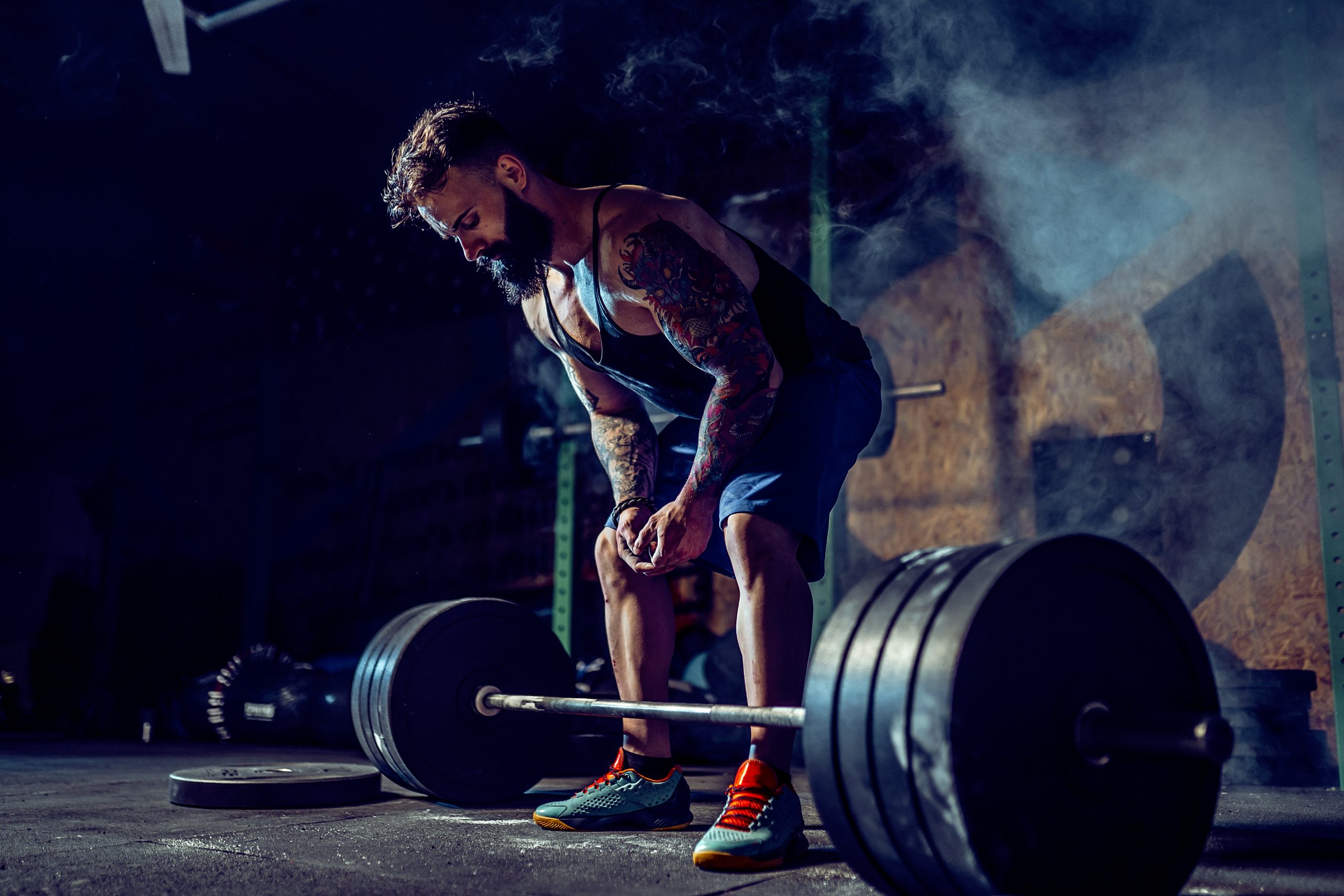 The deadlift is the simplest of the powerlifts: You bend down and pick up a barbell loaded with weight from the ground, drag it along your shins and thighs until you can lock it out, and then return it to the ground. There are few activities more universal to human experience than lifting heavy objects, and anyone who has moved boxes or furniture understands on some level what it means to move weight this way. Taken one repetition at a time, the deadlift connects us with the mainstream of human life, indeed with life itself.

For me, function is the name of the game. We humans have been deadlifting, after a fashion, since long before we walked upright—watch a bear or gorilla tossing around dumpsters or ripping trees out of the ground and you’ll get the picture. Throughout my teens and twenties, most of my jobs consisted of basic manual labor, focused purely on lifting: quarry work in Montana’s gorgeous Flathead Valley, unstocking produce in a Chicago supermarket (during which time the UFCW dunned my modest check in order to reap their dues), loading and unloading packages as a “casual” worker during the busiest time of the year for the U.S. Postal Service. I’d never valorize work like this—anyone who has hauled buckets of rocks during a concrete project or erected a fence knows there’s nothing glamorous or enjoyable about it in an intellectual sense—but I’m fortunate I was never injured during any of those jobs, that my back held strong throughout that miserable grind.

Because if you’ve worked in such occupations, and if the employers are bothering to provide any training at all, a good bit of it probably deals with avoiding back injuries. Safe lifting practices aren’t always consonant with deadlifting practices, especially when you’re some world-class lifter deliberately rounding your back or, if you’re doing Strongman and your meet allows it, hitching the weight over your thighs. But they can be: Bending down properly, lifting with your legs, and keeping your lower back out of the equation will add decades to your working life.  There’s no dignity in killing yourself on a lifting-intensive job in order to impress peers and bosses, but there’s dignity in continuing to collect a paycheck while remaining mostly intact.

Function above aesthetics and everything else. I have written about the deadlift’s technical aspects before, which amount to little more than driving one’s feet into the ground when commencing the lift, holding one’s core tight using the valsalva maneuver that consists of closing your mouth and then trying to exhale, keeping the bar in a tight path that all but drags your shins and thighs, and engaging your large lat muscles to prevent your back from rounding—if you’re experiencing lower back pain and you’re not attempting to win a powerlifting meet, you’re likely only hurting yourself. The deadlift, by that standard, is not a complicated lift, which is good if you’re an uncomplicated person who wants to do useful work while also minimizing gym time, in order to move on to some other productive activity.

This isn’t to say that the deadlift is the most effective or beneficial of the three powerlifts, for it most assuredly is not. The back squat, which demands technique and explosive power in a way that the deadlift and bench press do not, is arguably the king of those lifts, but it is highly technical—not quite as difficult to master as the clean and jerk or snatch, but challenging nevertheless.

Russian kettlebell master Pavel Tsatsouline’s explanation of why the deadlift is the universal lift, the everyman lift, rings true to anyone who has spent years studying both squat and deadlift: “A beginner needs a few months of instruction by a powerlifter before he can do a decent squat, and the deadlift works more muscles than the squat because you must hold on to the bar instead of letting it ride on your shoulders.”

Even though anthropometry plays a role in the performance of any physical task, the differences are more pronounced with the squat, in which short legs and a huge belly to cushion the weight offer a decided advantage, and the bench press, aided significantly by short arms and a wide, bloated midsection that limits the range of motion. The deadlift, to the extent that anatomical advantages play a role, benefits from three qualities I happen to possess through no effort of my own: long legs (I have a 36” inseam), a short torso (inseam notwithstanding, I’m only 5’11”), and long arms (a 76” reach). Of course, this matters only when one is undertaking powerlifting as a sport, not for the enhancement of functional ability, as everyone going through the motions with appropriate levels of resistance will get stronger over time.

Deadlifting, should you have the time and equipment needed to do it, will keep you in the game of life, even if you’re chained to a desk where you’d otherwise find yourself slouching your lower back into oblivion. You needn’t spend hours upon hours at deadlifting, in fact you couldn’t, given how taxing each rep is when performed properly—unlike bodybuilders seeking hypertrophied, visible muscles or CrossFitters deadlifting and Olympic-lifting unsafely, with rounded “cat back,” chasing time and rep numbers. And as far as aesthetics go—and so many critical discussions of lifting, particularly among laypeople, turn on questions of aesthetics, on having “the time to look good”—it likely won’t help much besides your forearms, legs, and posture, three things that pass mostly unnoticed in discussions of appearance.

Going by aesthetic criteria alone, I looked much better in my early teens and twenties, when I walked around at 210 pounds because I was wrestling and typically had to weigh in at 197. But whereas back then I deadlifted in the mid-500s with a more shoulder-damaging mixed grip, now that I’m 38 and 20 to 25 pounds heavier, I can deadlift 675 pounds with a hook grip. This doesn’t mean much in the scheme of things, and many people can lift more—as random online commenters will tell you, over and over again, when commenting on any lift you’ve performed—but it means a great deal to me, because I’ve seen how much it helped me when I Karelin-lifted the 300-pound neighbor who was hassling my friend, or during the week that I let my then-pregnant wife sit and watch while I moved couches, tables, and chairs into our new house all by my lonesome.

The point, at least for me, is to be able to take care of business, the way a bear can when it topples a dumpster or a gorilla when it snaps a medium-sized tree like a toothpick. Human capabilities at best represent only a shadow of such bestial feats, but they are ours, and we can put them to use. In the mid 1970s, when my brute of a father was involved in one of his many drunk driving accidents, he lifted the remnants of his Ford Mustang off his equally intoxicated passenger. Then deadlifting quite possibly saved a life, even as stupidity threatened it.

That same father, who spent a life countering self-destructiveness with a strong and seemingly indestructible body, chose to stop taking his heart medication at age 73 and then died at home of a heart attack at 74—because, he told me, he noticed his strength failing, and realized that for once he wouldn’t be able to defend himself against the ravages of time. Strength, he told me, transcended all the differences that divide humanity: Every single person, regardless of their starting point or their limitations, can get progressively stronger via training, mentally if not physically, and strength was always preferable to weakness. When debility and enfeeblement beckoned, he chose to let go of what remained of his life. Deadlifting, pulling a barbell off the floor and then returning it along the same path, can extend and improve ours.

Oliver Bateman is co-host of the ‘What’s Left?’ podcast.