Alana Newhouse explains why in Tablet 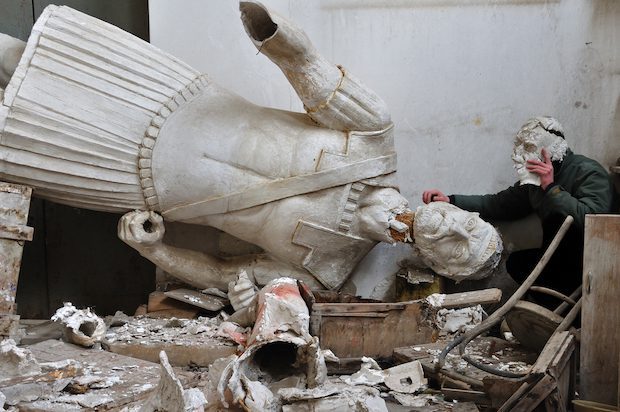 Everything is broken, Alana Newhouse argues in Tablet. We live in a fast, unbounded, and entirely flat world:

“Today’s revolution has been defined by a set of very specific values: boundarylessness; speed; universal accessibility; an allergy to hierarchy, so much so that the weighting or preferring of some voices or products over others is seen as illegitimate; seeing one’s own words and face reflected back as part of a larger current; a commitment to gratification at the push of a button; equality of access to commodified experiences as the right of every human being on Earth; the idea that all choices can and should be made instantaneously, and that the choices made by the majority in a given moment, on a given platform represent a larger democratic choice, which is therefore both true and good—until the next moment, on the next platform.

“Here’s a description of the aesthetics of Silicon Valley (emphasis added): ‘It’s the realm of coffee shops, bars, startup offices, and co-live/work spaces that share the same hallmarks everywhere you go: a profusion of symbols of comfort and quality, at least to a certain connoisseurial mindset. Minimalist furniture. Craft beer and avocado toast. Reclaimed wood. Industrial lighting. Cortados. Fast internet. The homogeneity of these spaces means that traveling between them is frictionless, a value that Silicon Valley prizes and cultural influencers take advantage of. Changing places can be as painless as reloading a website. You might not even realize you’re not where you started.’

“‘You might not even realize you’re not where you started.’ The machines trained us to accept, even chase, this high. Once we accepted it, we turned from willful individuals into parts of a mass that could move, or be moved, anywhere. Once people accepted the idea of an app, you could get them to pay for dozens of them—if not more. You could get people to send thousands of dollars to strangers in other countries to stay in homes they’d never seen in cities they’d never visited. You could train them to order in food—most of their food, even all of their food—from restaurants that they’d never been to, based on recommendations from people they’d never met. You could get them to understand their social world not as consisting of people whose families and faces one knew, which was literally the definition of social life for hundreds of thousands of years, but rather as composed of people who belonged to categories—‘also followed by,’ ‘friends in common,’ ‘BIPOC’—that didn’t even exist 15 years ago. You could create a culture in which it was normal to have sex with someone whose two-dimensional picture you saw on a phone, once.

“You could, seemingly overnight, transform people’s views about anything—even everything.

“The Obama administration could swiftly overturn the decision-making space in which Capitol Hill staff and newspaper reporters functioned so that Iran, a country that had killed thousands of Americans and consistently announces itself to be America’s greatest enemy, is now to be seen as inherently as trustworthy and desirable an ally as France or Germany. Flatness, frictionlessness.

“The biological difference between the sexes, which had been a foundational assumption of medicine as well as of the feminist movement, was almost instantaneously replaced not only by the idea that there are numerous genders but that reference in medicine, law or popular culture to the existence of a gender binary is actually bigoted and abusive. Flatness.

“Facebook’s longtime motto was, famously, ‘Move fast and break shit,’ which is exactly what Silicon Valley enabled others to do.

“The internet tycoons used the ideology of flatness to hoover up the value from local businesses, national retailers, the whole newspaper industry, etc.—and no one seemed to care. This heist—by which a small group of people, using the wiring of flatness, could transfer to themselves enormous assets without any political, legal or social pushback—enabled progressive activists and their oligarchic funders to pull off a heist of their own, using the same wiring. They seized on the fact that the entire world was already adapting to a life of practical flatness in order to push their ideology of political flatness—what they call social justice, but which has historically meant the transfer of enormous amounts of power and wealth to a select few.”

In other news: Joseph Epstein responds to critics of his column on Dr. Jill Biden: “The misogynist of my title, as Flaubert said of Madame Bovary, c’est moi. I became America’s most notable one on Saturday morning, December 12, upon the release of an 800-or-so-word op-ed I wrote in the Wall Street Journal published under the title ‘Is There a Doctor in the White House? Not If You Need an M.D.’ I had written the piece to get what I thought a minor pet peeve off my chest: the affectation of the president-elect’s wife in calling herself, and insisting that everyone else refer to her as, ‘Dr. Jill Biden.’ She is not a physician; rather, she was awarded a degree by a graduate school of education. What I thought was a fairly light bit of prose whose intentions were chiefly comic set off a forest fire of anger toward, abuse of, and outright hatred for its author. It proves you can be a naïf even at the age of 83. Nearly 5,000 readers wrote online to the Wall Street Journal to argue about my op-ed. My name ‘trended,’ as they say, number one on Twitter. The New York Times published a full-blown article about it, as did the Guardian in England. My local (that is, Chicago) press and television channels ran stories about it. It was discussed on MSNBC, Fox News, CNN, and on Stephen Colbert’s late-night show, where Mrs. Biden deplored ‘the tone’ and said, ‘One of the things I love most is my doctorate…. I worked so hard for it.’ Meanwhile, the English Department at Northwestern University, where I taught for 30 years, flushed me down Orwell’s memory hole by taking my name off its website and sending out an online message disassociating itself from my ‘noxious’ and ‘misogynistic’ views.”

French bookstore chain Gibert Jeune to close its flagship store in the Latin Quarter in March.

Ishmael Reed skewers Hamilton: “Ishmael Reed’s play, The Haunting of Lin-Manuel Miranda is a corrective to the revisionist missteps of the Broadway musical, Hamilton. À la A Christmas Carol, the titular character is led through a series of truth-telling apparitions which represent the marginalized groups absent from Hamilton. Each ‘haunting’ deconstructs Hamilton’s abolitionist, anti-hero portrayal of the founding father, delivered with Reed’s incisive, impeccably researched satire.”

Carl Trueman on evangelicals and critical race theory: “For many years, apart from sporadic eruptions in American society, the issue of race has played Banquo’s ghost at the American evangelical banquet: an unsettling, unwelcome, somewhat passive guest. But recent trends in American public opinion, fueled by reports of police violence, have made race an inescapable topic, fierce and divisive. Critical race theory (CRT), promoted by progressive activists and adopted by many evangelical intellectuals, has become the shibboleth: Are you for it? Or are you against it? A movement already strained to the breaking point by the Trump presidency now faces the very real possibility of coming apart over race.”

In praise of George MacDonald: “To this day, readers often find Phantastes to be a deeply strange novel. Nevertheless, we are steadied and orientated by all the fantasy literature that has grown out of it like realist novels suddenly animated by magic. We have Tolkien, but Tolkien only had MacDonald and his followers. To put the point bluntly, no MacDonald, no Tolkien.  It is still a curious book, but as it was the starting point of something new, Phantastes was immeasurably weirder for its original readers.  In fact, MacDonald had gotten ahead of the market.  He turned back to the tried-and-true genre of realist fiction, churning out close to thirty such books.  He was always frank about the fact that he wrote the realist novels because they paid the bills. Still, if you are a reader of Victorian novels who is willing to move beyond Dickens—maybe even one who has already delighted in Anthony Trollope or Elizabeth Gaskell—then there are some worthy contributions by MacDonald waiting for you as well. Start with his first, David Elginbrod (1863), or perhaps the semi-autobiographical Robert Falconer (1868), and see how you get on.”

An oral history of Wikipedia: “It’s hard to imagine the internet without Wikipedia. Just like the air we breathe, the definitive digital encyclopedia is the default resource for everything and everyone — from Google’s search bar to undergrad students embarking on research papers. It has more than 6 million entries in English, it is visited hundreds of millions of times per day, and it reflects whatever the world has on its mind: Trending pages this week include Tanya Roberts (R.I.P.), the Netflix drama Bridgerton, and, oh yes, the 25th Amendment to the United States Constitution. It was also never meant to exist — at least, not like this.”