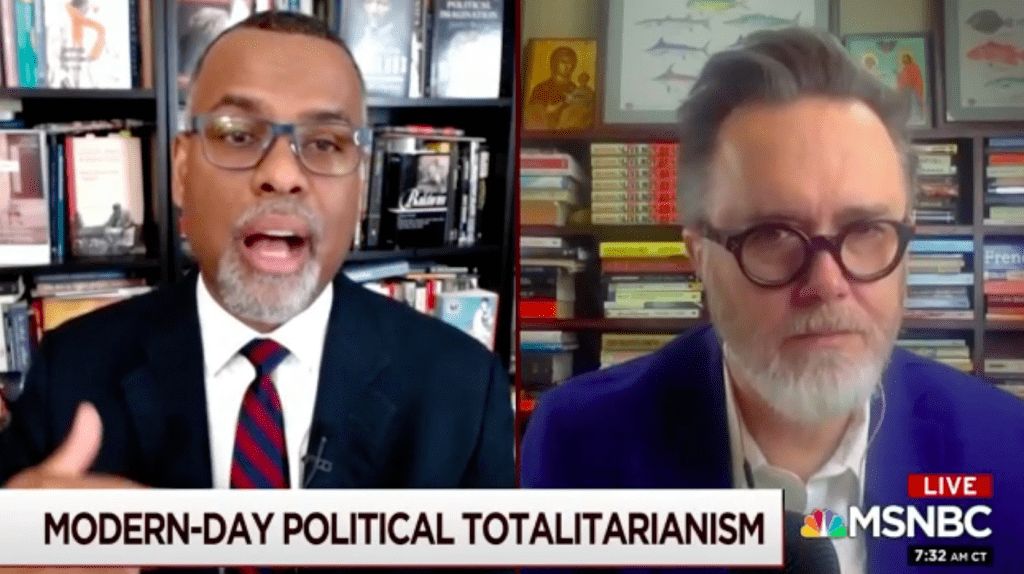 I was on Morning Joe this morning, talking about Live Not By Lies, and trying to minister to poor Joe Scarborough, who needs to overcome his background as a University of Alabama graduate (seriously, though, Joe and I have been teasing each other, in a friendly way, on phone calls and texts about the LSU-Alabama SEC rivalry). On the show, I got into a heated exchange with Princeton professor Eddie Glaude, about whether or not there is a such thing as illiberal leftism/soft totalitarianism. It’s not up on YouTube, but a reader sent me this link to the whole show; the segment with Glaude and me (and David French and Josh Barro) comes on about about 15:55.

Prof. Glaude basically demonstrated my thesis. He denied that wokeness is a thing — which, for a Princeton faculty member, is like a Politburo member going on TV to deny that the press is controlled in the Soviet Union. I brought up what faculty like him did this summer to Prof. Joshua Katz, a liberal professor who publicly stood up to Team Glaude’s attempt to suppress free speech and academic freedom at the university, in the name of “antiracism.” I wrote about it here.

If you watch the Morning Joe clip, you’ll see that Glaude fell back on the claim that basically people like me are white supremacists who can’t stand the fact that we are not allowed to say racist things anymore. It’s bullsh*t, of course, but this is precisely the way that these woke totalitarians exercise their power within the institutions they control: by demonizing dissent, even when it comes from old-fashioned liberals like Joshua Katz, as bigotry.

Glaude also tried to pass this off as a tempest in a teapot — as academic wrangling with no broader meaning for society. Wrong, wrong, wrong. Glaude admitted that universities produce wokesters, but then seemed to deny, at least implicitly, that this is significant. Oh, please! These little Jacobins have marched through the institutions of civil society — universities, newsrooms, corporations, and so forth — and have imposed the same illiberal, woke militancy. There is no escaping it. As I write in Live Not By Lies:

This is a serious mistake. In radicalizing the broader class of elites, social justice warriors (SJWs) are playing a similar historic role to the Bolsheviks in prerevolutionary Russia. SJW ranks are full of middle-class, secular, educated young people wracked by guilt and anxiety over their own privilege, alienated from their own traditions, and desperate to identify with something, or someone, to give them a sense of wholeness and purpose. For them, the ideology of social justice—as defined not by church teaching but by critical theorists in the academy— functions as a pseudo-religion. Far from being confined to campuses and dry intellectual journals, SJW ideals are transforming elite institutions and networks of power and influence.

The social justice cultists of our day are pale imitations of Lenin and his fiery disciples. Aside from the ruthless antifa faction, they restrict their violence to words and bullying within bourgeois institutional contexts. They prefer to push around college administrators, professors, and white-collar professionals. Unlike the Bolsheviks, who were hardened revolutionaries, SJWs get their way not by shedding blood but by shedding tears.

Yet there are clear parallels—parallels that those who once lived under communism identify.

Watch the Morning Joe segment, and observe the woke soft totalitarian method at work. First, deny that they are doing what they are clearly doing with regard to free speech and free thought. Second, demonize dissidents as white supremacists or some other kind of bigot.

My friend David French was on the segment too, and he said that we need more conservatives to stand up to this kind of illiberal militancy within institutions. I agree with him on that, even as I recognize that people like Prof. Glaude, whose allies control faculties, university administrations, newsrooms, corporations, and so forth, have the power to destroy the careers of dissidents — and will not hesitate to use it.

Yet this is what Aleksandr Solzhenitsyn said we have to do: to refuse to live by the lies they demand that we affirm. There is no way out of it except through suffering, and solidarity with those shattered by woke totalitarians like Prof. Glaude and his allies in power through elite networks. Rich Inner Life™, that one.

Three years ago, my friend tried to stop a known thief in the store where she worked. Another woman filmed the interaction, accusing her of discrimination and my friend lost her temper. No Black people were involved, yet my friend was accused of anti-Black racism and the incident went viral. She lost a job that paid less than minimum wage. Ultimately she lost her apartment in public housing. Upon moving into her car, she lost custody of her children.

The woman wielding the camera phone, a self-appointed SJW heard what she believed to be a dog-whistle that meant racism and successfully provoked a response. The SJW sought something from my friend’s employer but was not satisfied with a written apology and my friend resigning. She sought a psychic boost from labeling someone else racist and seeing that person be publicly shamed. At best, the woman who filmed the incident is working class. Both my friend and the thief live at or below the poverty line.

I share this story to highlight that the phenomenon has spread beyond the campus for a while now. SJWs do not want a more just or merciful society, they want to cast stones. They come from all walks of life and they’ll target anyone who is slightly beneath them in the pecking order.