On Roe: Thank You, Donald Trump I’m still struggling with jet lag, and the let’s-just-go-to-sleep-and-screw-it-all pleasure of becoming acquainted with divorce lawyers, so I just woke up at 3 am to see the news that SCOTUS is poised to overturn Roe v. Wade.

Excerpt from Politico, which broke news of the leaked draft, written by Justice Samuel Alito:

“We hold that Roe and Casey must be overruled,” he writes in the document, labeled as the “Opinion of the Court.” “It is time to heed the Constitution and return the issue of abortion to the people’s elected representatives.”

The immediate impact of the ruling as drafted in February would be to end a half-century guarantee of federal constitutional protection of abortion rights and allow each state to decide whether to restrict or ban abortion. It’s unclear if there have been subsequent changes to the draft.

No draft decision in the modern history of the court has been disclosed publicly while a case was still pending. The unprecedented revelation is bound to intensify the debate over what was already the most controversial case on the docket this term.

Who leaked it? My guess is that a clerk for one of the liberal justices did so. If true, there ought to be a merciless internal investigation, and if the leaker is found — whether he or she works for a conservative or a liberal justice — that person should be fired and made to suffer professionally. We cannot have the inner workings of the Supreme Court turned into a partisan football. If I am correct to guess that this leak emerged from the Court’s left flank, then this is probably another example of how the Left believes that when its core interests are threatened, it has no obligation to play by settled rules. You might recall that a liberal journalist told me last year that the election in 2016 of Donald Trump was such a shocking event to the media class that they concluded they had no obligation to strive to live by the standard rules of professional fairness in reporting. We see this everywhere that wokeness has come to power: old-fashioned liberal rules of fair play, free speech, and the like are construed as nothing more than a cover for evil people to impose their power on the oppressed.

A person familiar with the court’s deliberations said that four of the other Republican-appointed justices – Clarence Thomas, Neil Gorsuch, Brett Kavanaugh and Amy Coney Barrett – had voted with Alito in the conference held among the justices after hearing oral arguments in December, and that line-up remains unchanged as of this week.

It is as yet unclear how Chief Justice John Roberts will vote, according to the story.

Three of the five in the reported majority were appointed by Donald Trump. No Trump, no Roe overturned. If this draft ruling becomes law, then I hereby publicly repudiate myself for having withheld my presidential vote in 2016. I was wrong, and never have I been happier to be wrong.

Here is a link to the full text of the draft ruling. Justice Samuel Alito wrote it — and somewhere in lawyer heaven, Justice Scalia is puffing on his pipe and smiling. Alito’s prose is very clear, and his argument against the Roe decision is powerful. If you have never read anything critical of Roe‘s shaky reasoning, Alito’s crisp analysis will open your eyes. The 1973 decision was nothing more than an example of “raw judicial power,” as a 1973 SCOTUS dissenting justice put it. Notice this paragraph citing leading liberal legal lights, critical of Roe‘s reasoning. Law professors Tribe and Tushnet, in particular, are strongly on the legal left: This is a hugely important distinction, one that Roe supporters consistently elide: the “right to privacy” upon which Roe is based is not the same thing when applied to other matters, e.g., consenting sexual partners. Only abortion has to do with the life or death of an unborn human person: 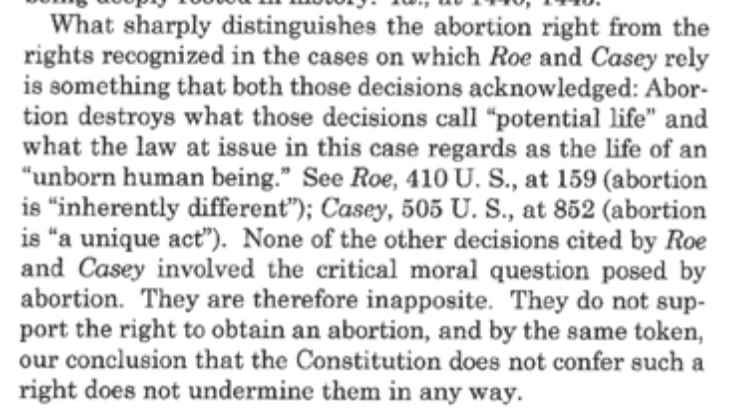 You may not believe that an unborn human is fully a person under the law, but no one can deny that the growing biological entity that exists inside the womb of a woman after conception is of our species — and is a unique phenomenon.

Justice Alito goes on to say, contra the 1992 Casey ruling, that it doesn’t matter what the public thinks about this or any other SCOTUS ruling. Justices have to do their jobs as well as they can, based on their analysis of the law. In fact, I bet that if the eventual ruling of the Court on abortion affirms what we see here in the leaked document, it will redound to the short-term political benefit of Democrats. Still, it will have been the right thing to have done.

It is important to say what overturning Roe would not do: ban abortion nationwide. All it would do is return the issue to state legislatures. New York, California, and other liberal states would remain havens of baby-killing. Other states, like Louisiana, where I live, and Texas, would be more humane. Everybody should know, however, that the United States has one of the world’s most liberal abortion legal regimes. Just last week, when I was in the Netherlands — that is to say, that secular progressive welfare-state utopia — a Dutch friend was telling me that the law requires a five day “think it over” waiting period between the time a pregnant woman presents herself for abortion, and the time the doctor performs it. Most European countries allow abortion, but restrict it to the first trimester, absent certain exceptions that have to be approved by more than one doctor. No European country is as liberal as the US is on abortion. If SCOTUS overturns Roe, then the US will become like Europe in this respect: abortion restriction will depend on the state.

As Politico notes, SCOTUS drafts can change before being announced, so this leak is not the law. Nevertheless, if it does prove to be the case, then the pro-life movement can rightly take pride in the tireless work of fifty years. I will be grateful to them. And I will be grateful to the late Ruth Bader Ginsburg for refusing to retire during the Obama presidency. And I will be grateful to Justices Alito, Thomas, Barrett, Kavanaugh, and Gorsuch, for finally rectifying an egregious injustice. Since Roe became the law of the land, an estimated 63 million unborn children have died in their mother’s wombs, at the hands of abortionists. The current president, only the second Catholic chief executive in US history, supports the continuation of this abomination. Donald Trump, a non-churchgoing Presbyterian who is almost nobody’s idea of a model Christian, was the first sitting president in the history of this country to have addressed in person the March For Life (he did in 2020), and acted decisively to bring this holocaust of the unborn to an end. God writes straight with crooked lines.

Here is Trump’s 2020 speech to the March For Life. Though he appointed Justice Alito, George W. Bush did not go there to talk to the faithful. Neither did George H.W. Bush, who appointed Justice Thomas. Donald Trump did. Again, I never have been so pleased to have been wrong about a politician. On the right to life, he delivered.

This, if true, is really not normal. Our Republic teeters… https://t.co/RH5UhtEIOn

Wait, Kale, wait. Get the Narrative straight. It is only the Right that poses a threat to the stability of the Republic. Watch MSNBC — they’ll tell you.

5 to overturn Roe. 3 to overturn Mississippi law. 1 to not get dirty looks at the Chevy Chase club. https://t.co/3NDVnkf7xZ

One Republican politician above all others deserves credit for Roe being overturned:

Donald Trump was a strictly replacement-level player in judicial politics. Any Republican in the Oval Office from 2017-2021 (whether Trump/Cruz/Rubio) would have appointed justices from the same FedSoc shortlist. But not any Republican in the Majority Leader’s office could have managed the caucus to get both Kavanaugh’s and Barrett’s seats filled by Republican appointees.

I don’t want to be churlish here–obviously a Republican would have needed to win in 2016 for this, and Trump was that Republican.

But the degree to which any good thing is attributed to the president whenever possible is maybe the most distorting thing about national politics. And the fact that so many people who give all credit on judicial vacancies & confirmations to Trump also regard McConnell (who again was *far more important* than any one president on this) as a swampy squish is tiresome.

So just to make a friendly addendum, let celebratory toasts remember the Republican politician who did the heavy lifting to see Roe overturned this term: McConnell