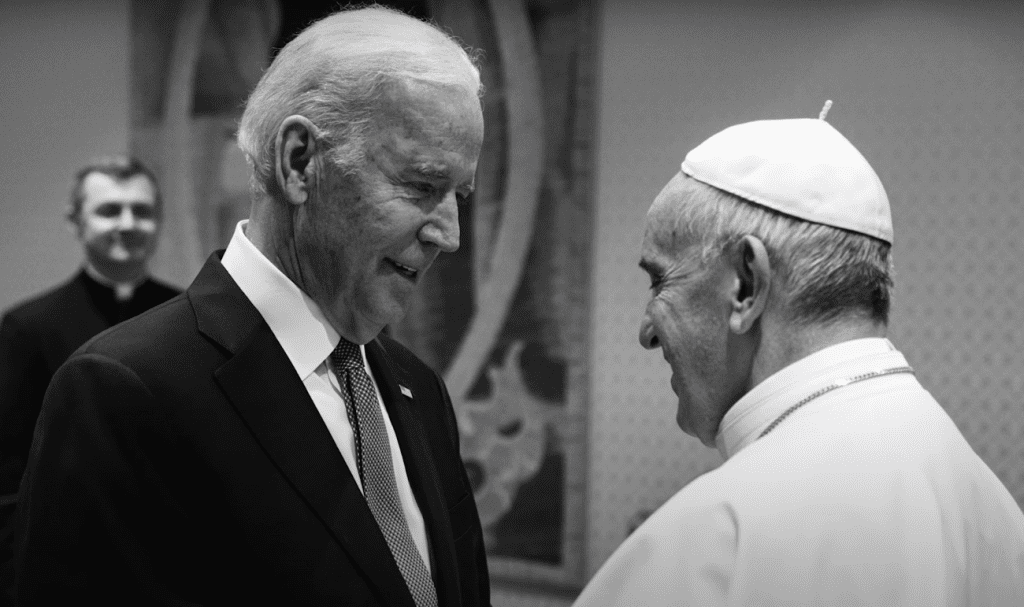 Today is the anniversary of the Roe v. Wade ruling, which gave unrestricted right to women to abort their unborn children. Over 60 million Americans have died at the hands of an abortionist since then. Yesterday, a reporter asked White House press secretary Jen Psaki about Joe Biden’s pro-abortion views, related to his Catholic faith.

Psaki’s comments came during her first press conference Wednesday, where an EWTN Global Catholic Network reporter asked her about “two big concerns for pro-life Americans” — the Hyde Amendment and Mexico City Policy. The former bars the use of federal funds to pay for abortion under most circumstances, while the latter restricts taxpayer funding of abortion abroad. “What is President Biden doing on those two items right now?” reporter Owen Jensen asked.

Psaki responded that the administration would have more to say on the Mexico City Policy, adding: “I will just take the opportunity to remind all of you that he is a devout Catholic and somebody who attends church regularly. He started his day attending church with his family this morning but I don’t have anything more for you on that.”

Here’s what the devoutly Catholic’s White House said today in a press release:

In the past four years, reproductive health, including the right to choose, has been under relentless and extreme attack.  We are deeply committed to making sure everyone has access to care – including reproductive health care – regardless of income, race, zip code, health insurance status, or immigration status.

The Biden-Harris Administration is committed to codifying Roe v. Wade and appointing judges that respect foundational precedents like Roe.  We are also committed to ensuring that we work to eliminate maternal and infant health disparities, increase access to contraception, and support families economically so that all parents can raise their families with dignity.  This commitment extends to our critical work on health outcomes around the world.

As the Biden-Harris Administration begins in this critical moment, now is the time to rededicate ourselves to ensuring that all individuals have access to the health care they need.

See, this is why many devout Catholics preferred the barely-Christian Presbyterian Donald Trump to the churchgoing Catholic Joe Biden: one was committed to policies that saved the lives of the unborn, the other is committed to policies that make it possible to exterminate them. Such is the devotion of many Baby Boomer Catholics: an attachment to the Church, except when it interferes with the Sexual Revolution.

It’s not surprising that a Democratic administration is all-in on abortion rights. It is appalling that a Catholic president who presents himself as a “devout Catholic” is.

Today, Andrew Sullivan writes about how needlessly antagonistic Biden is being on culture war issues. Excerpts:

How do we know when “equity” has been achieved? That’s a very good question. It seems to me that the only definition of “equity” that works is that all groups are represented in federal policies in proportion to their share of the population, or more so — since equity can also require over-representation of these groups to make up for the past. The fact that an individual born, say, in the early 21st Century, has no personal or moral connection to slavery or segregation (au contraire), is irrelevant. She must pay for the past sins of her race.

Biden is therefore enforcing the Ibram X. Kendi view that “the only remedy to past discrimination is present discrimination.” And he’s enforcing it across the entire federal government and any institution the federal government funds. To show he’s serious, he’s appointed Susan Rice to enforce equity in a “whole-of-government” approach. America is no longer about individual freedom; it’s about identity group power, and its constant management by government.

Biden’s executive order on “LGBTQ+” is also taken directly from critical gender and queer theory. Take the trans question. Most decent people support laws that protect transgender people from discrimination — which, after the Bostock decision, is already the law of the land. But this is not enough for Biden. He takes the view that the law should go further and insist that trans women are absolutely indistinguishable from biological women — which erases any means of enforcing laws that defend biological women as a class. If your sex is merely what you say it is, without any reference to biological reality, then it is no longer sex at all. It’s gender, period. It’s socially constructed all the way down.

Most of the time, you can ignore this insanity and celebrate greater visibility and protection for trans people. But in a few areas, biology matters. Some traumatized women who have been abused by men do not want to be around biological males in prison or shelters, even if they identify as women. I think these women should be accommodated. There are also places where we segregate by sex — like showers, locker rooms — for reasons of privacy. I think that allowing naked biological men and boys to be in the same showers as naked biological women and girls is asking for trouble — especially among teens. But for Biden, this is non-negotiable, and all objections are a function of bigotry.

And in sports, the difference between the physiology of men and women makes a big difference. That’s the entire point of having separate male and female sports, in the first place. Sure, you can suppress or enhance hormones. But you will never overcome the inherited, permanent effects of estrogen and testosterone in childhood and adolescence. Male and female bodies are radically different, because without that difference, our entire species would not exist. Replacing sex with gender threatens women’s sports for that simple reason.

For good measure, Biden also pledges to remove any protection for orthodox religious freedom and individual conscience in “LGBTQ+” areas in his proposed Equality Act, which repeals the relevant sections of Biden’s own Religious Freedom Restoration Act, and also makes sex indistinguishable from gender.

I wonder if Joe Biden even knows what critical theory is. But he doesn’t have to. It is the successor ideology to liberalism among elites, a now-mandatory ideology if you want to keep your job. But Biden’s emphatic backing of this illiberal, discriminatory project on his first day is relevant. He has decided to encourage “unity” by immediately pursuing policies that inflame Republicans and conservatives and normies more than any others.

The thing about lefties and the culture war is that they consider any objection or resistance to what they want to do to be an act of aggression. Biden is undertaking a culture war Blitzkrieg here, but nobody in the media will notice. The rest of us had better.