Those who have long stoked the flames of populism should not be surprised by the results. 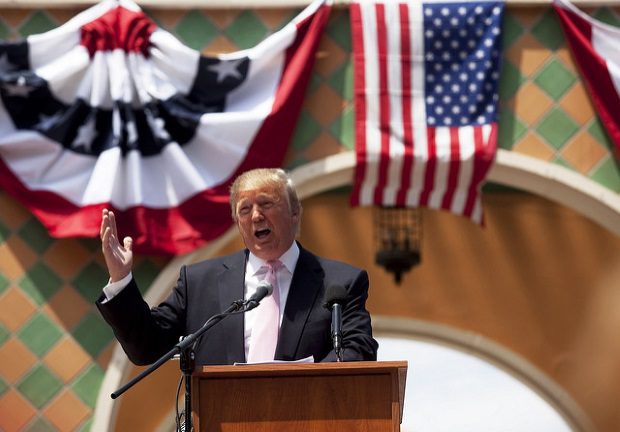 It’s been said that societies elect the governments they deserve. That’s certainly the case with the American Right and Donald Trump. In spite of this, many Republicans have been beside themselves about the man for the past 12 months. According to his critics, the former reality-TV star is a gross departure from the conservative tradition. They couldn’t be more wrong.

A group of Trump disparagers were so discontented with their nominee that they vowed to found their own rump organization, the Renegade Party, in hopes of finding a Republican politician willing to commit seppuku on their behalf. Never mind that the Libertarian Party was in the process of nominating two former governors for their ticket.

In fairness to the Renegades, perhaps they were deterred by the fact that the Libertarians also featured James Weeks, a candidate for the party chair’s office who stripped down to his underwear before announcing he was no longer interested in the position. But according to Trump’s Republican critics, he is even more ridiculous than Weeks. He is, so they say, a constant flip-flopper who is psychologically authoritarian, ignorant of policy, inveterately dishonest, and insufficiently adherent to conservative orthodoxy.

Aside from the fallacious armchair psychoanalysis, it’s hard to argue with any of these characterizations. Nonetheless, Donald Trump is very much within the spirit of the conservative movement—if not its letter. The idea that this might be true is infuriating to many of his detractors. But the leadership of #NeverTrump has been doing anything but contemplating just how that might be the case.

One explanation for Trump’s success that’s been tossed around is that the entire campaign is nothing more than a nefarious plot hatched by Hillary and Bill Clinton. “Maybe Donald negotiated a deal with his buddy @HillaryClinton. Continuing this path will put her in the White House,” Jeb Bush asserted in a December tweet.

Others have asserted that Trump’s primary victories were a deliberate creation of nefarious liberal journalists who knew he’d lose in the general election and thought his loss might be devastating enough to also bring down many down-ballot Republicans. Never mind that the voluminous media coverage that Trump has received has been overwhelmingly negative, more than enough to crush the maladroit Republicans who typically run for president. Yet instead of hurting him, the controversies surrounding Trump only helped his appeal to the conservative grassroots.

There’s a very good reason that this is the case: The American Right has become willfully disengaged from its fellow citizens thanks to a wonderful virtual-reality machine in which conservatives, both elite and grassroots, can believe anything they wish, no matter how at odds it is with reality.

They can wake up in the morning and read email newsletters filled with nonsense from the likes of Dick Morris along with false promises of “secret cancer cures.” As they make their breakfast, they can flip through websites utterly devoid of reporting and data analysis predicting that Democrats are on the run and Hillary Clinton is sure to be indicted. During the work day, they can turn on the radio and listen to Christian nationalists like Bryan Fischer tell them how the Founding Fathers intended to provide religious freedom only to Christians.

As ridiculous as Trump’s temporary Muslim ban is, it’s actually moderate compared with what Fischer would like to do to adherents of the “Ebola virus of culture.” In his ideal world, America would ban the construction of mosques across the country, make Trump’s temporary ban permanent, and also forever bar Muslims from serving in the military.

Fischer and Trump are not alone in their desire to illegally target Muslims. Fischer’s preferred candidate, Ted Cruz, has proposed that law-enforcement officers conduct perpetual campaigns to “patrol and secure” Muslim neighborhoods in a sort of secret-police arrangement. Family Research Council president Tony Perkins has repeatedly said that liberal Christians and Muslims do not deserve religious freedom as well. Anti-Muslim activist Frank Gaffney wants to bring back HUAC.

The more one examines Trump’s positions (or at least the ones that haven’t changed the same day), the more one finds that they are completely within the mainstream of the American Right. The reality is that Donald Trump is not an aberration; he is an apotheosis.

One of the most persistent right-wing claims against Trump has been that he is better described as a nationalist than a conservative. The accusation has no power against him, however, since he has freely admitted to it, knowing as he did that the majority of Republican voters and the nation as a whole have never been particularly interested in constitutional conservatism. The data points on this subject have been out there for years, but since most conservative political operatives have almost no grasp of political science, none of them seems to have been aware of this. The accusation is likewise impuissant due to the fact that politicians, including the sainted Ronald Reagan, have always spoken of making their country great.

But usually, instead of arguing with him on the issues, #NeverTrumpers challenge him on process questions or criticize him because his supporters are on the fringe. Conservatives cannot support Trump, the argument goes, because some of his backers are outright racists. And indeed it is true that some of the most enthusiastic Trump advocates are white nationalists as well.

Yet it’s odd that conservative intellectuals have suddenly become concerned with racism. Literally for decades, smart liberals like Sam Tanenhaus, Frank Rich, and Jonathan Chait have been trying to get conservatives to notice that racism and anti-intellectualism were rampant within many corners of the Right. These critics were denounced as haters and frauds peddling lies. After Trump’s smashing victories, a small percentage of conservatives have finally admitted the lefties were right.

Before that, a handful of right-leaning intellectuals like Rod Dreher, Reihan Salam, and David Frum did see the writing on the wall and speak out—resulting in them being dismissed as “RINOS” or becoming non-persons to fellow travelers who had worked with them for decades. Donald Trump has followed in those footsteps as well, repeatedly threatening journalists and politicians for questioning him. He’s far better at this game than his critics, though. Jeb Bush can certainly attest to that, having been transmogrified repeatedly into a beaten dog during televised debates.

Ah, but what of Trump’s famously mercurial and vociferous temperament? Surely that sets him apart from his most ardent opponents. Well, not all of them. Take radio host Glenn Beck, for instance.

Despite his long and self-admitted record of mental instability, Beck became one of the most prominent faces of #NeverTrump, even after he mashed his own face into a bowl of Cheetos in a bizarre attempt to mock the real-estate tycoon’s famously orange visage.

The #NeverTrumpers should never have allowed Beck within a hundred miles of National Review’s “Against Trump” issue. And yet there he was, despite his past claims that demonic forces were trying to keep his Blaze television channel off America’s cable systems, that President Obama would soon begin putting conservatives into concentration camps, and that God had “ordained” Ted Cruz to become the president.

In the end, the voluminous attacks against Donald Trump from the right didn’t amount to much, and not just because conservatives have long been far less numerous than they’d long believed. The attacks didn’t work because they were so obviously hypocritical.

Having failed to persuade a single politician to die for their sins, the #NeverTrump elites announced they would be putting forward David French, a staff writer at National Review who was generally unknown even to political junkies. But even that effort collapsed upon itself after the French candidacy was greeted with nearly universal bewilderment and derision.

Matters were made even worse after a video emerged of French saying that he would vote for Donald Trump if the billionaire got the Republican nod. Last week, French made it official by announcing he would not make the run.

It was a wise decision. It would have been a far wiser, however, if conservatives (including myself) had tried to meet the needs of the middle rather than stoking the flames of populism. We didn’t. Now they’re burning down our house.

Matthew Sheffield is a journalist currently working on a book about the future of the conservative movement to be published this summer. He is a former columnist for the Washington Times, the creator of NewsBusters and the former managing editor of the Washington Examiner. You can follow him on Twitter.