The European climate activists are committing more than mere vandalism. 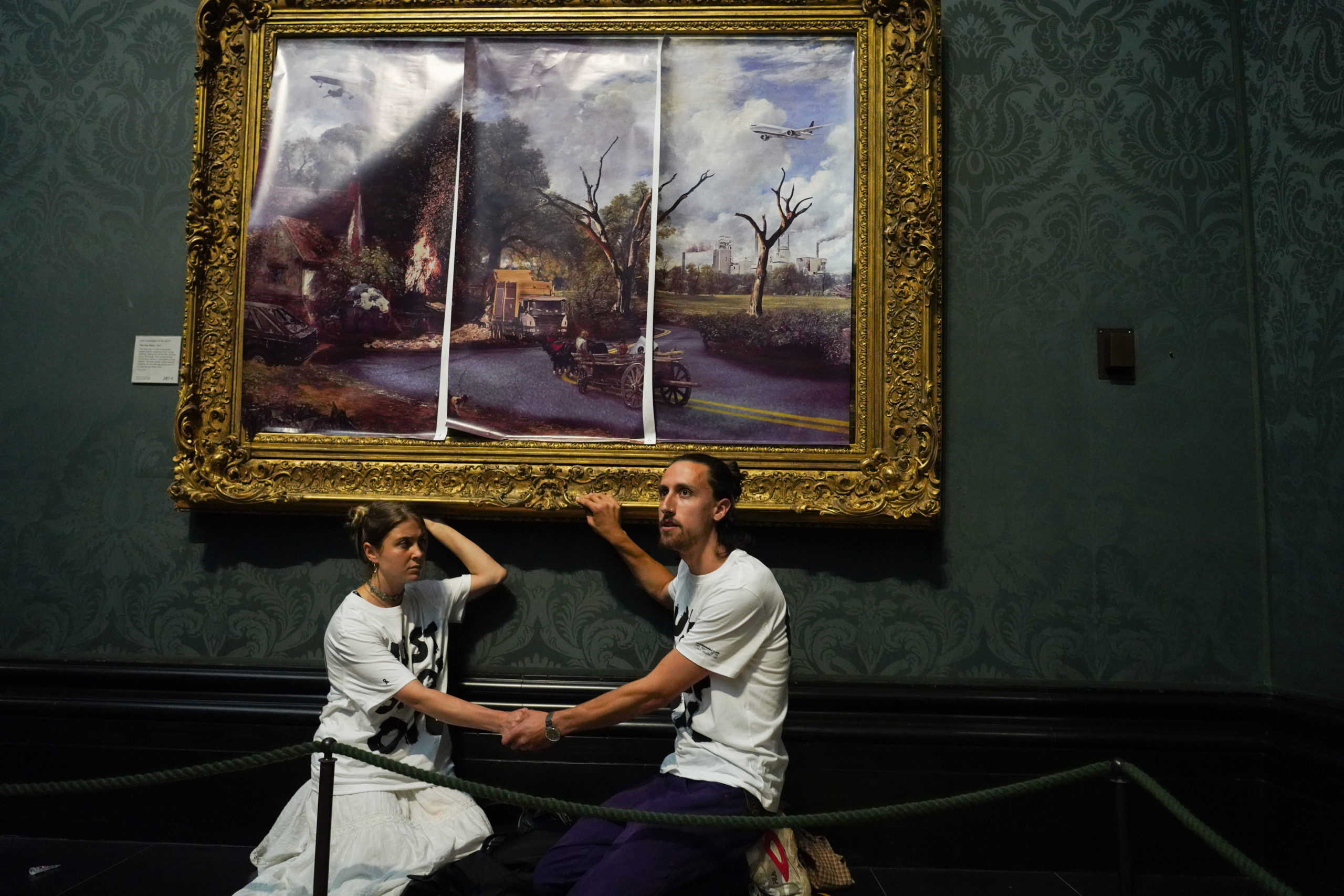 Just Stop Oil climate activists subvert The Hay Wain painting by John Constable and glue themselves to the frame at the National Gallery on the 4th of July 2022, London, United Kingdom. (Photo by Kristian Buus/In Pictures via Getty Images)
Casey Chalk

The latest in a bizarre trend of performative fake vandalism of great works of art happened in the Hague on October 27, when a climate activist glued his own head to Johannes Vermeer’s priceless “Girl with a Pearl Earring,” completed in 1665. This came four days after German police arrested two environmental activists for throwing mashed potatoes at Claude Monet’s “Grainstacks,” completed in 1890, which sold for $110.7 million at a 2019 auction. All suffered no damage, because, like Van Gogh’s “Sunflowers,” which suffered an attack of tomato soup in London on October 14, they were all behind protective glass.

“How do you feel when you see something beautiful and priceless being apparently destroyed before your eyes?” one of the Dutch activists asked, while his co-conspirators’ glued head was covered in tomato soup. One of the London environmentalists queried: “What is worth more, art or life? Is it worth more than food? Worth more than justice? Are you more concerned about the protection of a painting or the protection of our planet and people?” One of their German co-belligerents declared: “We are in a climate catastrophe and all you are afraid of is tomato soup?...Does it take mashed potatoes on a painting to make you listen?”

To the activists’ rhetorical question regarding the comparative value of art and life—do we have to choose? For it seems to me it is not so easy to separate human flourishing from expressions of the human experience in what the ancient Greeks called techne. It is the act of making or doing things that both signifies what makes humans uniquely human and expresses our deepest thoughts and affections. In other words, in demeaning and denigrating art, it is possible that we are also undermining the human ability to assign value to life itself.

Of course, to assert one’s love for one thing—namely, the welfare of the planet—by denigrating another, unrelated thing—a beautiful work of human creation—is sensational mostly in its stupidity. Imagine a womens’ rights activist trashing a beloved public library, or a Black Lives Matter activist torching an immigrants’ urban store (the latter actually happened, multiple times, which tells you something about BLM’s own internal incoherence).

More helpfully, the incidents do help clarify what it is about activist culture that is so deeply disordered and confused about human dignity. The environmental activists want to emphasize a disparity, and by extension an injustice, in what we value. We are shocked, they claim, by an attack on a valuable, famous piece of art. But, they insist, we are not shocked by pollution, rising global temperatures, food insecurity, the loss of endangered species, etc.

We should ask, however, why we should care about any of those things, and what it is about humans that does provoke us to care about them. The role of art in differentiating mankind from the rest of nature has ancient pedigree; Aristotle makes the same observation in his Nicomachean Ethics. Aesthetics, the Greek philosopher argues, is a “structured whole,” something that aims to present, via analogy, the universal in the particular. In doing so, humans become more perfectly themselves: “no one would be considered to be unself-controlled for gazing at a beautiful statue or a beautiful horse or human, or listening to someone singing,” he writes in Eudemian Ethics. Aquinas more than a millennia later draws on these themes, describing beauty in his Summa Theologiae as that which has proportion, clarity, and integrity.

To make art requires a sophisticated combination of various acts and attributes found only in humans. In The Worth of Persons: The Foundation of Ethics, Australian professor James Franklin observes: “A purely intellectual rationality is an essential part [of] what gives humans worth, even if not the whole story.” Also included in that list, he explains, are social cognition (of which language is an external effect), volition (our free will), and the complexity of our emotions. We see all of these at work in art, which is a form of language, requires our will, and expresses our affections and desires often in unparalleled ways.

Art evinces another quality that sets us apart from the rest of creation: the ability to honor and memorialize. For often when we gaze at art, we not only contemplate something (and perhaps someone), but we unite intellects and affections to it. We consider the artist’s fears, hopes, and yearnings. We are, in a way, acknowledging the inherent dignity of the other through our appreciation of art.

To reflect on aesthetics, whether it be presented via canvas, music, or architecture, instills in us empathy, not only for other people, but all of nature, as TAC editor Declan Leary argued in a piece earlier this year discussing Russian artist Ilya Repin. Moreover, we lovingly possess the other in our engagement with art, which is precisely the same method by which we come to value the natural world: as custodians of a beloved possession.

“Why should I not vandalize a precious artwork, or why should I not shoot the last dodo for fun?” Franklin rhetorically asks. “Those entities are valuable, so their destruction is absolutely speaking a loss. That and that alone explains why it is wrong for me to destroy them.” This, I would argue, is perhaps most saliently why activists like those who engage in mock performative desecration of art are so deeply incoherent in their premises and values. They think by attempting to deface art they are helping set things right, but, in reality, they are doing exactly the opposite. By repudiating one of those things that makes us most human, and thus most capable of virtuous acts toward others and the natural order, they vitiate their own argument.

No other species truly creates art (I’ve seen elephants in Chiang Mai, Thailand, paint pictures, but they’re just following rote steps their trainers have taught them). To attack art is thus to attack man. In that respect, such activists employ a utilitarian calculus that is not essentially different from the totalitarian regimes they profess to detest. It was Pol Pot’s Khmer Rouge, Mao’s Chinese Communist Party, and Hitler’s Schutzstaffel who were motivated to destroy good things out of a twisted, imbalanced love for other things, some of which, like one’s land or people, are also good. In their frantic fervor, these zealots jettisoned the very things that had formed them into people capable of creating and safeguarding beauty.

Ultimately, activists who attempt to vandalize beautiful creations of men are engaged in an act of thoughtless self-destruction, undermining the very things that help us to love the earth as our own. “They [the activists] advocate for the preservation of nature,” noted the Dutch museum. “But we are in favor of preserving our cultural heritage.” In cherishing and preserving authentic human goods such as art, we become more capable of cultivating and protecting the natural world, because it directs us to why creatures, trees, and natural vistas are worthy of saving. Those Dutch, English, and German activists’ conception of the human person, and what enables him to flourish, is as cheap as the canned soup and potatoes they hurled at million-dollar masterpieces.