Law school administrator Brian McCall believes old-fashioned things about modesty. He was tarred as an anti-Semite and sexist on campus 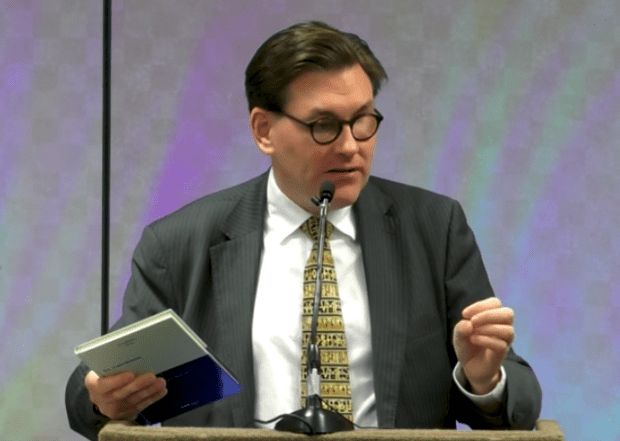 Just wanted to put this story on your radar, which, surprisingly to me at least, hasn’t blown up beyond local and a few Catholic outlets. Brian McCall, a professor and dean at the University of Oklahoma’s law school, was forced to step down from his administrative position essentially because he’s an orthodox Catholic. In the course of the controversy, the law school’s dean sent out a specious letter about inclusivity and harassment.

What’s the controversy about? According to KFOR, a local TV station (link in previous graf):

OU’s Equal Opportunity Office conducted an independent review of McCall and found no evidence of workplace harassment or discrimination, but McCall decided to resign because of the backlash from his statements in his book, To Build the City of God: Living as Catholics in a Secular Age.

“Women must veil their form to obscure its contours out of charity towards men,” McCall wrote in the chapter Modest Contact With the World: Women In Pants and Similar Frauds. “To know that women in pants have this effect on men and to wear them is thus a sin against charity as well as modesty.”

That’s a super-antiquated view, for sure, and not one I share at all. But so what? The man has never harassed or discriminated against a woman in the office. But that doesn’t matter. He committed a thoughtcrime related to his religion.

More from the reader’s letter:

Of course, McCall had an impeccable record, per this testimony from a former student of his who identifies as a feminist and a Democrat. He sounds like an very decent man.

Bre Little, an Oklahoma City paralegal, said McCall was the dean over the paralegal program during her time at OU and also was her professor.

Little, who described herself as a Democrat and a feminist, said she disagrees with McCall’s sociological, theological and political views, but defends his professionalism.

“He was never anything but kind, fair and extraordinarily helpful to me as a student. I never felt discriminated in any way, for any reason in his classes, or in my encounters with him as an administrator,” Little said.

“I can first-handedly speak to how this man treated me as a woman, as a student, and as a human being,” she said. “And I believe that stories like mine have a place in the dialogue before everyone casts stones.”

McCall said some of the claims made about what he believes are not accurate.

“I believe it an injustice and a sin to treat someone not on the merits of what they do simply because they do not agree with me,” he said.

The OU College of Law is a place of inclusion. Beyond ensuring the college is free from illegal harassment or discrimination, the college must prepare tomorrow’s leaders – our students – for the world in which they will serve. It would be a disservice to them if we did not provide an educational experience that presents diverse subject matter, encourages thoughtful conversation and debate, and prepares them to practice in an increasingly diverse world. This commitment is reflected in our first-year class, which is the second class in the history of the OU College of Law to have more women than men, and which has the highest percentage of minority students of any class in the history of the college. Attracting students from diverse backgrounds ensures that all points of view will be heard in our classrooms and, ultimately, in our society.

At all levels of the college, we promote the importance of diversity, multiculturalism, inclusion, and equality for all students, faculty, and staff. Our educational efforts and programs in these areas continue to grow. Last year, we created a standing Dean’s Committee on Diversity and Inclusion with our student leaders.

Blah blah blah inclusion diversity multiculturalism equality diversity inclusion minority diverse … it’s all a load of ideological bulls–t. Dean Joseph Harroz is being dishonest when he says that “all points of view will be heard” at OU Law school. Brian McCall is a traditionalist Catholic, but he felt obliged to resign.

Guess who also believes what Brian McCall does about female dress codes and modesty? Many practicing Muslims.  The Quran instructs women to dress modestly. If a Muslim law professor wrote a book saying that women should wear hijab (which takes many culturally specific forms), would he or she feel pressured to resign their job at OU Law School? Would Dean Harroz feel obliged to generate several paragraphs of self-abasing jargon about how OU Law has never deviated from the party line?

Note well that OU Law did not fire Brian McCall. He resigned to end the controversy. But reading Dean Harroz’s full statement indicates the kind of pressure the man must have been under, simply for holding old-fashioned views about modest dress.

Look at how the OU Daily campus newspaper characterized McCall’s views in a September 30 news report. Note: not an op-ed, but a news report:

An OU law professor and associate dean wrote in a 2014 book that women should not wear pants and gay marriage is “insanity,” among other controversial views. Though his faculty member status is protected under academic freedom, an expert said his administrative position may not be.

Brian McCall, an OU law professor, associate dean for academic affairs and associate director of the OU Law Center, is editor of Catholic Family News and has also contributed to The Remnant newspaper and the International Fatima Rosary Crusade. The Southern Poverty Law Center has classified these organizations as anti-Semitic hate groups.

Well, there you go. If the SPLC says it, it must be true. The OU Daily‘s coverage of the McCall situation relied heavily on the SPLC.

The Daily Oklahoman — the local newspaper, not the student paper — editorialized in favor of McCall, writing in part:

While not a deliberate parody, a published academic article by an OU professor examined how literature by Chicana lesbians “not only invites scholars to question heteronormative assumptions about food, gender, and identity, but also demonstrates the potential of queer studies to enrich a variety of topics in food scholarship.”

This month, Georgetown University professor Christine Fair wrote that Senate Republicans “deserve miserable deaths while feminists laugh as they take their last gasps. Bonus: we castrate their corpses and feed them to swine?” It elicited nary a peep.

There’s no shortage of bizarre and laughable views in academia. McCall’s comments pale when compared with many of his peers. Demands that he resign his administrative job, therefore, had nothing to do with “extreme” views. Instead, McCall was targeted for being conservative and religiously devout.

Exactly right. Traditionalist Catholics are a tiny minority, even within Catholicism. Now we know what kind of bigotry Dean Joseph Harroz and his institution support. I warn in The Benedict Option that this is the kind of thing that conservative Christians should prepare themselves for in the workplace. Most conservative Catholics aren’t traditionalists (who are on the margins of the Catholic world, and even disdained by Pope Francis), but if they think this bigotry isn’t coming for them, they’re deluded.

I repeat: Brian McCall was investigated by the university, and found never to have discriminated against or harassed women in his position as an administrator. But he is guilty of thoughtcrime. Should any Muslim or Orthodox Jewish law professor seek to work at OU Law, they had better keep their opinions about modest religious dress to themselves. Right?

Don’t forget these lines from the reader who sent me this story:

None of that matters. The SPLC said he’s probably an anti-Semite, and he believes that women shouldn’t wear pants. But hey, Dean Joseph Harroz wants you to know that OU Law acts to assure that “all points of view will be heard in our classrooms and, ultimately, in our society.” The pathetic thing is that Dean Harroz probably believes that about himself and the institution he leads.

UPDATE: A Catholic reader points out in an e-mail that the publication McCall edits, Catholic Family News, has attacked me recently.

Doesn’t bother me. I can live with the fact that they are weirdos. Trad World is full of weirdos. It shouldn’t be a crime to think like a weirdo, as long as you treat everyone under your authority in the office with respect. McCall did that.