Blame the Deep State for Carnage in Ukraine

The foreign policy establishment knew it was needlessly provoking Russia at every step along the way. 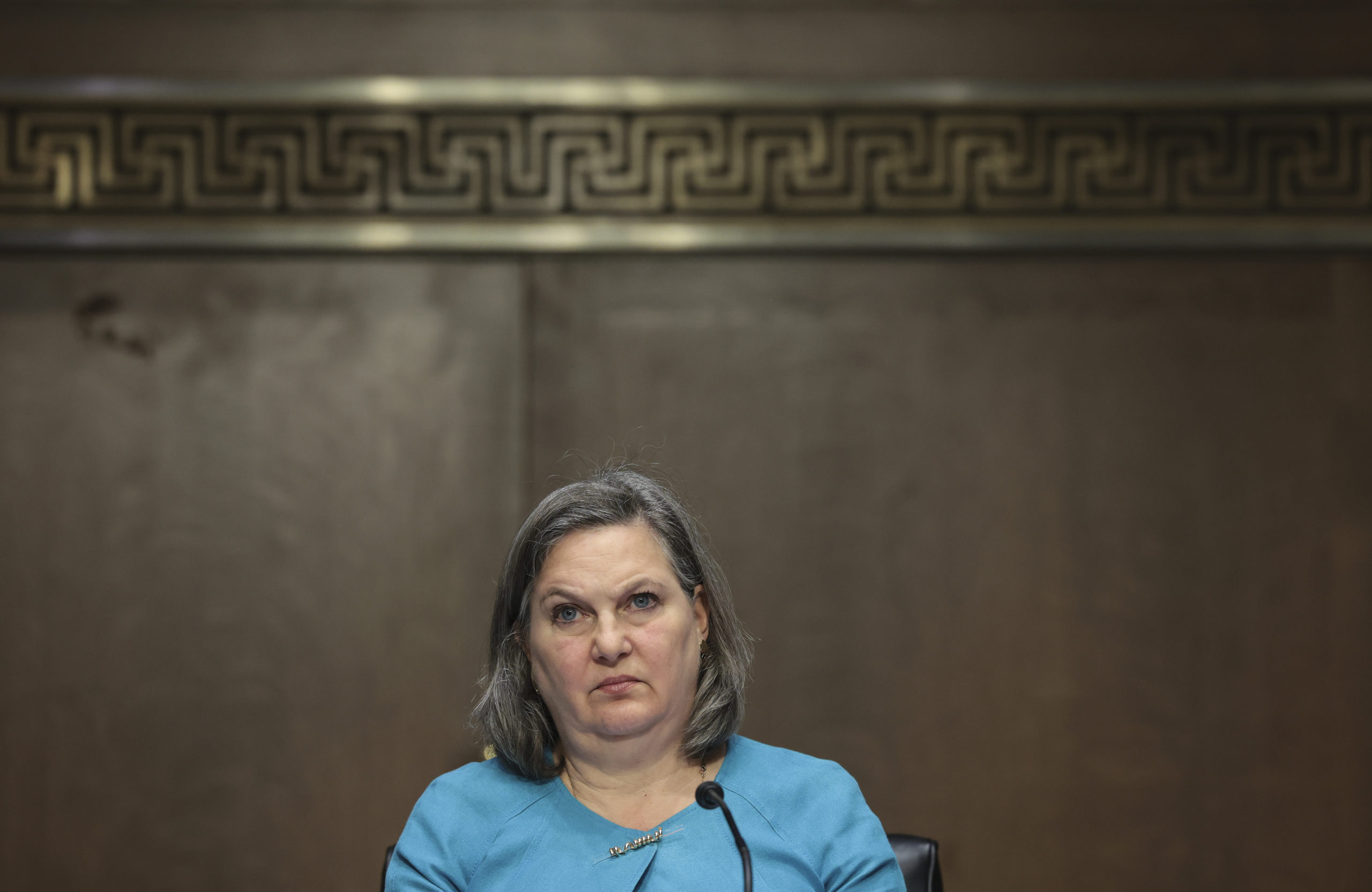 From the onset of the Ukraine war, the corporate media, politicians, and all the controlled NGOs throughout America and Western Europe were lockstep in their claim that the Russian military action in eastern Ukraine was unprovoked and unjustified—an act of aggression that could not be allowed to stand.

There was one problem with this propaganda blitz: it was totally untrue. The Deep State—the  government elites, intelligence community, and the military establishment—has spent decades threatening and provoking Russia by pushing NATO up against their border.

You do not have to like Russia to see this, and you can detest Vladimir Putin until the cows come home. The fundamental issue remains the same: the Russians view NATO on their border as an act of aggression and a threat to their national security, and we have known this for decades.

The record is clear and unassailable.

In 1990, as the Soviet Union was beginning to break apart and the possibility of peace throughout most of the world was in sight, the United States—in no less a personage than James Baker, U.S. secretary of State—pledged that NATO would not move eastward toward the Russian border. That promise was central to enabling the withdrawal of the Soviet military divisions from East Germany to facilitate the unification of the country. This commitment also provided the security necessary for the dissolution of power inside the Soviet Union. Without such a guarantee, the resistance to the breakup would have been intense and almost certainly violent.

At that point, it had been less than 50 years since Russia had been invaded. The horror of the Second World War cost the Russian people an estimated 25 to 35 million lives. In addition to the unimaginable sea of blood from that war, Russians well remember the many other invasions that have caused death, sorrow, and brokenness for an incalculable number of their fellow citizens. Since Americans have never experienced a foreign invasion, they have no concept of that horror. (The war of 1812 was a brief and small fight.)

Secretary of State Baker did the right thing to assuage a legitimate fear and facilitate the breakup and the freeing of hundreds of millions of people captive in the Soviet system. But before the ink was dry, the U.S. foreign policy establishment as expressed in NATO and the E.U. began breaking its word.

As post-Soviet Russia went through a serious economic depression unknown to most in the West, the elites in the U.S. and Europe put together a plan to expand NATO all the way to the borders of Russia. This cynical move openly ignored and violated the West's pledge. In early 1997 George Kennan, the foreign policy lion of much of the 20th century, warned in an op-ed in the New York Times:

In late 1996, the impression was allowed, or caused, to become prevalent that it had been somehow and somewhere decided to expand NATO up to Russia's borders.

But something of the highest importance is at stake here. And perhaps it is not too late to advance a view that, I believe, is not only mine alone but is shared by a number of others with extensive and in most instances more recent experience in Russian matters. The view, bluntly stated, is that expanding NATO would be the most fateful error of American policy in the entire post-cold-war era.

A year later, in May 1998, following a vote by the U.S. Senate to expand NATO, Kennan again warned the Western policy elites of the danger in an interview with Thomas Friedman of the New York Times.

''I think it is the beginning of a new cold war,'' said Mr. Kennan from his Princeton home. ''I think the Russians will gradually react quite adversely and it will affect their policies. I think it is a tragic mistake. There was no reason for this whatsoever. No one was threatening anybody else. This expansion would make the Founding Fathers of this country turn over in their graves. We have signed up to protect a whole series of countries, even though we have neither the resources nor the intention to do so in any serious way. [NATO expansion] was simply a light-hearted action by a Senate that has no real interest in foreign affairs.''

Kennan’s warnings were ignored. A year later, in 1999, NATO engaged in military action against the newly formed nation of Serbia. To this day, you can see the damage of the bombings in Belgrade, the Serbian capital.

Serbia has been an ally of Russia since the time of the First World War. This was viewed in Russia as a warning that NATO intended to do as it pleased and that anyone who stood up to them could count on the same treatment. This calculated insult led directly to the rise of a nationalist leader in Russia. In 2000, Vladimir Putin was elected president. Since the bombing of Serbia, America and NATO's participation in wars and the willful wreckage of other countries such as Yugoslavia, Afghanistan, Iraq, Libya, Syria, and a number of countries in Africa, Central, and South America, has not gone unnoticed by the Russian leadership.

No serious person in Washington can say they were not warned of the impact of their power-lust in expanding NATO. But the lie continues. The top foreign policy leaders who spoke up over the years against the destructive interventions were ignored.

William Burns, Biden's director of the CIA—the agency charged with knowing how other nations will act and react—has had a ringside seat on Russian and NATO policy for more than 30 years. In 1990, Burns served under Secretary of State James Baker in a planning role during the period when Baker made the pledge to Russia that NATO would not advance past the borders of the newly reunited Germany.

Burns's career as an anointed cardinal of the Deep State is well documented. In fact, he is a bit of a legacy. Burns's father, a major general in the Army, was deeply involved in intelligence work and served Reagan and Bush I on the Disarmament Councils. Burns himself was a Clinton appointee in 1995 when he wrote, while serving as counselor for political affairs at the U.S. Embassy in Moscow, that "hostility to early NATO expansion is almost universally felt across the domestic political spectrum here."

The intensity of Russia's antipathy to the expansion of NATO toward their border, and Ukraine in particular, was accentuated in a 2008 report by Burns—at that time U.S. ambassador to the Russian Federation—to Bush II Secretary of State Condoleezza Rice: "Ukrainian entry into NATO is the brightest of all redlines for the Russian elite (not just Putin). In more than two and a half years of conversations with key Russian players, from knuckle-draggers in the dark recesses of the Kremlin to Putin’s sharpest liberal critics, I have yet to find anyone who views Ukraine in NATO as anything other than a direct challenge to Russian interests."

Even if Biden’s CIA director was not able to bring his extensive experience to bear this year, others in the State Department knew full well how Russia would react to open moves to add Ukraine to the membership rolls of NATO. Yet Victoria Nuland, mandarin in the neocon ranks of the foreign policy establishment and State Department, in 2013 boasted that the U.S. had spent more than $5 billion promoting pro-Western "civil society" groups in Ukraine since the end of the Cold War.

In 2014 the United States assisted, if not outright directed, a coup d'état against an elected government in Ukraine because that government wanted friendly relations with Russia—a larger neighbor with a shared history stretching back centuries. The Deep State could not tolerate that friendship. An infamous leaked call between then Assistant Secretary of State Nuland and former U.S. Ambassador Geoffrey Pyatt discussing helping "midwife" the February 2014 revolution can be heard here. University of Chicago Professor John Mearsheimer gave a 2015 lecture in which he warned about the problems and dangers wrought by the 2014 U.S.-engineered Ukraine crisis.

After numerous rebuffed Russian diplomatic overtures to resolve the dangers posed by an unfriendly and NATO-armed Ukraine, Russia did act—as Kennan, Burns, and others predicted. The Russians moved in 2014 to defend their southern border. By supporting local Russian-speaking separatists, Russia was able to secure Crimea, a peninsula that had been central to the Russian Navy for 300 years. Did they go further? No. Did they start a full-on war?  No. But they did as they had promised and moved to defend their nation’s southern front. As Professor John Mearsheimer pointed out in a June 6, 2022, lecture, there was a long list of provocations by the U.S. and NATO leading up to that.

Many of these provocations were outlined in the 2019 Rand Corporation report entitled Extending Russia. The Rand Corporation is a Deep State think tank which has helped engineer most of the U.S. foreign interventions since its founding in 1948. But even the Rand report summary warns against going so far as to precipitate military action. Apparently the brain-trust of Nuland, Biden, and Blinken didn’t read that part. For years, they have made Ukraine a de facto member of NATO, a neutral nation in name only. Since the 2015 Minsk treaty, they have poked the bear—and they kept poking until the bear lashed out. How does that serve America's interests?

If you are interested in having a glimpse into the thoughts and designs of our Deep State toward Russia, read the whole Extending Russia Rand Corporation report. It is a chilling litany of the United States' intentional interference in sovereign nations in Russia's neighborhood to injure and provoke Russia. U.S. policy has been, apparently: instigate hostilities between Ukraine and Russia at all costs. Why did leadership refuse to negotiate in good faith with Russia? They knew the Russians would react as they have. What did U.S. policymakers hope to gain?

These are the questions that must be answered. Foreign policy and military elites must be held to account for the death and destruction their antagonistic policies have unleashed. They can pretend they didn’t know what would happen, but serious foreign policy experts outside the Washington bubble know better.