The Kingdom's treatment of Christians and Shias has been abysmal. It's time for the president to stop sucking up. 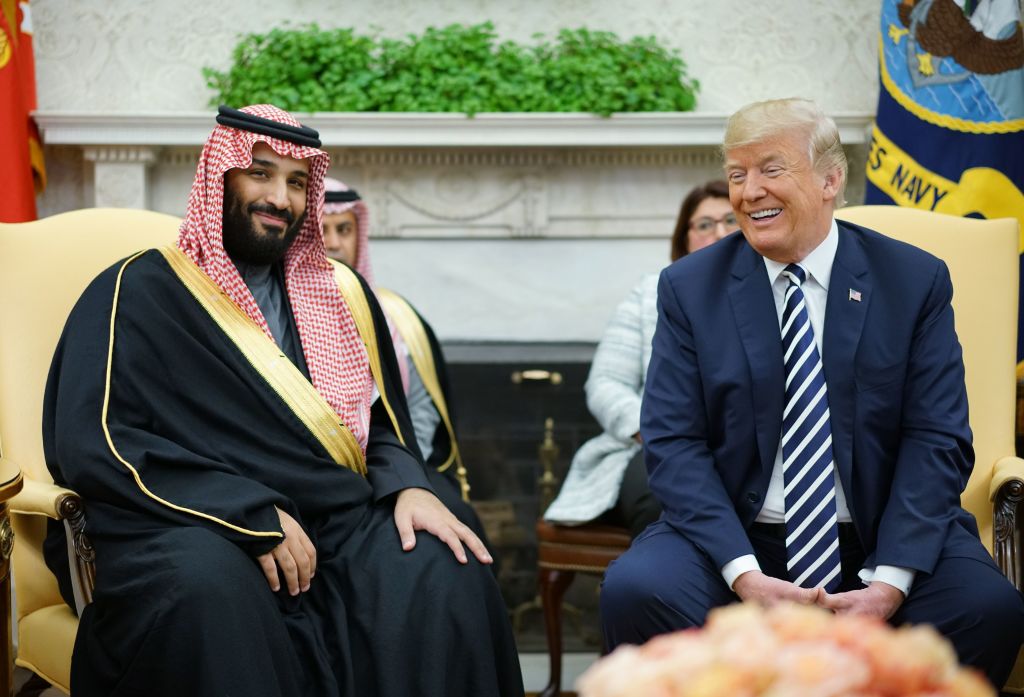 While proclaiming his commitment to America First, President Donald Trump has treated Saudi Arabia with extraordinary obsequiousness. He has turned American military personnel into royal bodyguards and whitewashed that country’s most outrageous human rights abuses, including the slicing and dicing of journalist and American resident Jamal Khashoggi.

Perhaps the president’s worst hypocrisy, however, is treating one of the world’s leading religious persecutors with such tenderness. Despite his strong evangelical support, rarely does a word of criticism of the Saudi royals pass his lips, or those of any of his officials. (Sam Brownback, the ambassador-at-large for religious liberty, is a notable exception.)

Administration officials must understand they are defending the indefensible. The Kingdom is at the bottom of virtually every freedom list of countries. For example, Freedom House ranks Saudi Arabia as “not free,” failing in both political rights and civil liberties. Reports FH: “Saudi Arabia’s absolute monarchy restricts almost all political rights and civil liberties.”

State is not alone in this judgment. The group Open Doors rates Riyadh at 13 of 50 global persecutors, in practice a very harsh verdict. Saudi Arabia is behind only nations with widespread violence or mass imprisonments, such as Syria, Yemen, Libya, North Korea, Eritrea, and Afghanistan. To look good only compared to them, or Somalia, Sudan, and Pakistan, is not much of an endorsement. The World Watch report observes of Riyadh: “The spike in pressure from family life from the 2019 to the 2020 World Watch List reflects the brutal reality for Christians who have converted from Islam—these believers risk violence because of their decision to follow Jesus.”

The U.S. Commission on International Religious Freedom reports that the royals “maintained a ban on non-Muslim public religious observance and continued to arrest, detain, and harass individuals for dissent, blasphemy, and apostasy. The Saudi government continued to violate the rights of Shi’a Muslims and non-Muslim minorities, and to advocate a doctrine of religious intolerance.”

However, State offers the greatest detail. It notes that “sharia is the foundation of the Kingdom,” while the Quran and Sunna are the constitution. Between 85 percent and 90 percent of the population is thought to be Sunni, so the system is organized by and to benefit Sunnis. The law forbids “non-Islamic public worship, public display of non-Islamic religious symbols, conversion by Muslim to another religion, and proselytizing by a non-Muslim.”

Riyadh also criminalizes the promotion of atheism, materials contradicting Islamic law, and “any attempt to cast doubt on the fundamentals of Islam.” Blasphemy is typically punished by lengthy imprisonment and lashing, though the death penalty also is authorized. (This was one of the charges against blogger Raif Badawi, which resulted in a prison sentence of 10 years and 1,000 lashes, though so far only 50 of the latter have been imposed.) Warns the Commission: “Muslim Saudis who convert away from Islam face legal penalties that include capital punishment for the crime of ‘apostasy’.”

Although all of these rules are characterized as religious, they are inherently political too. The counterterrorism law penalizes “anyone who challenges, either directly or indirectly, the religion or justice of the King or Crown Prince.”

These rules affect foreign visitors and employees as well as citizens. In theory non-Muslims—non-converts—can worship privately. Foreign visitors are allowed to bring one Bible, though as State reports, “the government regularly exercised its ability to inspect and confiscate personal non-Islamic religious materials.”

However, these rights seem to be honored more in the breach than in practice. Discreet meetings within diplomatic and foreign compounds are most likely to be allowed without interference; other gatherings not so much. Indeed, relates USCIRF, “While the Saudi government has stated repeatedly that non-Muslims who are not converts from Islam may practice their religion in private, this policy has not been codified.” Adds the Commission, “The Saudi government has broken up private religious gatherings on the grounds that they are violating noise regulations, that alcohol is present, or that members of the gatherings lack proper work authorization,” or even “that men and women in attendance sit together in the same room, claiming such mixing could encourage prostitution.”

Shia, too, suffer at the hands of the Kingdom’s Sunni monarchs. Shiites who meet privately for religious purposes can be arrested and imprisoned. Political opposition is received even worse. Clerics, scholars, and students face prison and even execution for resisting Riyadh’s dictates. Isaac Six of Open Doors USA observes: “The concern is that many of those who are executed are part of the Shia Muslim minority. So there’s a concern that there may have been some discrimination.” Indeed, sectarianism rather than security almost certainly is the basis for punishment.

Moreover, USCIRF observes that “Shia Muslims in Saudi Arabia continue to face discrimination in education, employment, and the judiciary, and lack access to senior positions in the government and military.” Private discrimination reinforces public repression. The Pew Research Center reports that social hostility is “high.” State notes that “instances of prejudice and discrimination against Shia Muslims continued to occur in private-sector employment. Social media provided an outlet for citizens to discuss current events and religious issues, which sometimes included making disparaging remarks about members of various religious groups or ‘sects’.” Converts usually did so in secret, reports State, “fearing the reactions of family members and the threat of criminal charges, up to and including execution. Women in particular feared loss of parental rights or being subjected to physical abuse as a result of converting from Islam.”

There is good news, but it tends to be merely less bad. For instance, notes State, the “public presence” of the religious police, or so-called Commission for the Promotion of Virtue and Prevention of Vice, is down, except in Mecca and Medina. There are fewer reported instances of “harassment.” However, these enforcers of fundamentalist morality have not disappeared and still “monitored social behavior.” That means targeting everything from “gender mixing” to exhibited evidence of other faiths to disrespect of Islam to practicing sorcery or black magic to moral degeneracy to alcohol to acting in ways inconsistent with approved Muslim practices.

Even as Crown Prince Mohammad bin Salman has won popular support, especially among the young, by relaxing social controls, he has respected the royals’ corrupt bargain with the Wahhabist clergy. The former funds the latter’s extremist and intolerant theology around the world, including in America. The latter tells the Saudi people to obey those who rule in Riyadh. And a good time is had by all.

The Commission expresses hope. Promises of reform have been made and meetings have been held. However, USCIRF admits, “Notwithstanding these positive developments, religious freedom concerns in Saudi Arabia remain.”

Of particular concern, younger Saudis are still taught to hate non-Muslims. State notes that textbook revision continues, “although intolerant material remained in circulation, including older versions of textbooks, particularly at the high school level, that contained language disparaging Christians and Jews. Content included statements justifying the execution of ‘sorcerers’ and social exclusion of non-Muslims,” as well as attacks on members of other faiths.

Human Rights Watch points to the continued use of “biased, anti-Semitic, and anti-Shia language. Some teachers reportedly continued to express intolerance of other faiths and of alternative viewpoints regarding Islam.” The Anti-Defamation League studied Saudi textbooks and reports that “dozens of troubling passages that clearly propagate incitement to hatred or violence against Jews, Christians, Shi’ite Muslims, women, homosexual men, and anybody who mocks or converts away from Islam” The ADL also cites language promoting anti-Semitic memes and violence against Jews. In fact, USCIRF worries that not only has progress halted, but “after more than 15 years of incremental progress, the Saudi government showed backsliding on improvements to its textbooks that continued to propagate intolerance and advocate violence against religious minorities, women, and the [gay] community.”

Christianity is under extraordinary pressure in the Middle East. Observes the Guardian: “Millions of Christians in the region have been uprooted from their homes, and many have been killed, kidnapped, imprisoned and discriminated against.” Once 20 percent of the population of the Middle East and North Africa, their numbers have dropped to less than 4 percent. Saudi Arabia has been a major contributor to this assault against Christianity.

The administration cannot force Saudi Arabia to be something that it’s not. But Washington should stop enabling a regime that undertakes, day in and day out, a full-scale assault on American values and interests. There should be no illusions about what Riyadh represents.

Doug Bandow is a senior fellow at the Cato Institute. He is a former special assistant to President Ronald Reagan and author of several books, including Beyond Good Intentions: A Biblical View of Politics and Foreign Follies: America’s New Global Empire.