The Tragedy of Stoner Comedy 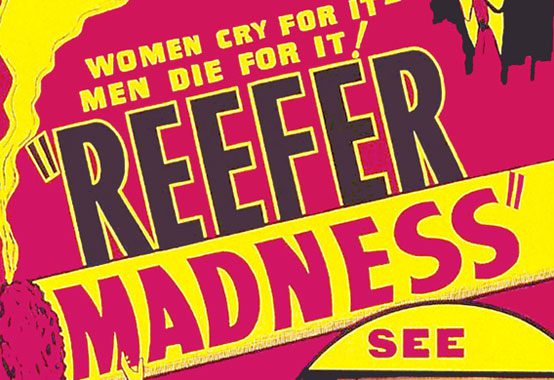 Media outlets didn’t need a toxicology report before deciding that Rudy Eugene—the maniac who over Memorial Day weekend chewed off a homeless man’s face in Miami before being shot dead by police—had been high on “bath salts.” The synthetic drug is America’s latest craze, or panic, and now there were grisly images to go with it—what might as well have been scenes from a zombie film.

Drugs are good box office and great ratings on the nightly news and television’s endless police procedurals. But the nation’s attitude towards some narcotics appears to be mellowing. Fourteen states have effectively decriminalized possession of small amounts of marijuana, and on June 4 Mayor Bloomberg and the New York Police Department announced plans to follow suit in NYC. As marijuana goes mainstream, its media portrayal has likewise softened. But the soft focus hides a hard reality—not about the drug but about the war to prohibit it.

The first drug-war film of note actually predated the federal prohibition of cannabis by one year. 1936’s “Reefer Madness”—which has been, for many years now, obligatory “camp classic” viewing for high-school and college students first discovering the illicit charms of marijuana—was originally released by a church group in reaction to the menace posed by Mary Jane.

In the film, marijuana transforms seemingly normal, upstanding American youth into maniacs similar to the opium fiends of earlier stereotypes. We see homicide and suicide, sexual assault and generalized insanity. The cannabis of 1936 apparently was so potent that it could destroy society—this at a time when so-called ditch weed prevailed, which decidedly lacked potency compared to today’s boutique brands. This trope, so camp in retrospect, nonetheless became central to anti-drug propaganda in the decades ahead.

The 1940s and 1950s saw relatively little in the way of commentary on marijuana, but a shift took place in the late 1960s as the libertine ways of the hippie generation proved problematic. Jack Webb’s “Dragnet”television series focused quite often on the myriad evils of narcotics usage—which was never without dire consequence—during its four-season run from 1967 to 1970. Drugs were everywhere: on the strip, where people dropped microtabs of acid and then painted themselves blue; in middle schools, where young pushers did the work of the Fagin-esque masterminds of the marijuana trade; and in middle-class homes, where the sharing of one joint led a young Don and Betty Draper-esque couple to neglect its newborn in a bathtub with a running faucet, where the tot ineluctably drowned.

Jack Webb, a noted jazz aficionado who went so far as to release a couple of albums in that most drug-infused of musical genres, included elements of subtle comedy in his po-faced anti-substance commentaries. But this was nothing compared to what was to come in just a few short years, when Cheech Marin and Tommy Chong released a series of comedies that did for marijuana’s acceptance into the mainstream what Amos and Andy did for race relations. Cheech and Chong, in such films as “Nice Dreams and“Still Smokin,’” established a template that has predominated ever since. Their straggly long hair, stoner talk, and constant fiending for the demon weed established the stereotype that prevails, in various permutations, to this day. And as happens when actors embrace caricature roles, both were typecast to such a degree that the stoner aesthetic took over their careers.

Cheech and Chong influenced everything that came in their wake (and bake). Characters like Sean Penn’s Spicoli in“Fast Times at Ridgemont High,”along withentire films such as “Dazed and Confused” and “Dude, Where’s My Car?,”offer examples of high-school students who smoke weed and come to be defined by it—ironically, bringing us back full circle to “Reefer Madness.”

These movies had much in common: they took place in majority-white communities and the forbidden herb was consumed with relatively minor consequences beyond the usual cognitive hiccups. This approach to cannabis came to television in “That ’70s Show,” in which Tommy Chong played a middle-aged hippie treated as harmless, if high, in a manner reflective of the federal detente in the anti-drug offensive during the Carter years. Similarly, “The Big Lebowski,” films by the director Kevin Smith, and African-American movies like “How High” and “Friday” reinforce the fuzzy stereotype of the cannabis smoker as an amiable dunce bereft of ambition or agency. (In Quentin Tarantino’s drama “Jackie Brown,” Samuel L. Jackson’s character warns the moll played by Bridget Fonda, “That s–t’s gonna rob you of your ambition.” She giggles: “Not if your ambition is to get high and watch TV.”)

Of late, the stoner comedy has become more realistic. This shift is exemplified by 2008’s “Pineapple Express,” a James Franco and Seth Rogan vehicle revolving around a process server leaving a joint containing some top-flight herb at the house of a drug dealer—weed the dealer immediately traces back to the smoker and the street-level pusher who supplied him. The movie blended stoner stereotypes and broad humor with blood, gore, and violence. In this, we can see the influence of television drama “The Wire”on the genre.

Undoubtedly, there will be more to come. Greater realism in the portrayal of cannabis users will serve to culturally normalize the illicit activity. But more than likely, the stoner comedies of the future will continue to play up the humor while conveniently overlooking the tragedy at the heart of American marijuana prohibition.

Jails, especially in the South, have many occupants who are there simply for possession of marijuana. With the surge in privatized prisons—some of which have contractual stipulations requiring that occupancy rates not fall below 90 percent—we may well see a political counterforce to the medical-marijuana and decriminalization movements. Then again, perhaps their business plans will refocus on some novel problem: bath salts, maybe. Whatever the case, there will be no stoner comedy that deals with the harm inflicted on a family when an adult male breadwinner is sent to state prison for what is essentially a victimless crime. Marijuana prohibition has been the gateway to an exponential expansion of the prison-industrial complex, but that’s a reality silver-screen fantasies will not touch. As with romantic comedies, which give us a skewed view of love, the stoner genre is riddled with distortions and misrepresentations—a bad trip worthy of the worst directors in Hollywood.