The Dangers of Cartel Government 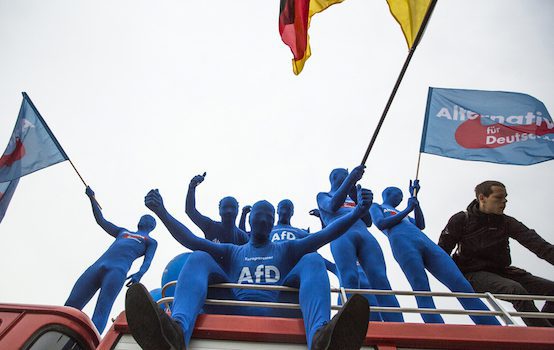 Europe is fracturing, and establishment leaders across the continent believe the answer is to suppress dissent and strengthen the European Union. EU critics point to a “democratic deficit,” but the so-called Eurocrats who dominate the organization believe that consent only matters within Brussels, not without.

This tin-eared thinking is shrinking the center throughout European politics. British voters backed exit from the EU; in Austria the far-right Freedom Party has joined the governing coalition. The extremist National Front surpassed France’s traditional socialist party during the last French election. In the Netherlands only a disparate coalition has kept Geert Wilders’ anti-immigrant, anti-Muslim Freedom Party out of government. Italy appears likely to take a rightward, Euroskeptic turn in its upcoming election. Stable government has become impossible in Spain with the collapse of support for the once-ruling socialists.

Something similar is happening in Germany, the continent’s largest economy and de facto banker. Berlin has been forced to play a leading European role, despite the lingering unease created by Germany’s unforgettable history. However, next to economic prosperity, Germans most desire political stability, which their country has always seemed to have—until last September’s election.

The Christian Democratic Union/Christian Social Union (which run as one party) received barely over a third of the vote, their lowest total since 1949. The Social Democratic Party came in at barely a fifth of the total, the least since 1933, before the Nazi Party extinguished German democracy. Four years earlier, the two traditional governing parties had collected about two thirds of the vote. This time they barely won a majority together.

The liberal (in a European sense) Free Democratic Party reentered the Bundestag after falling below the 5 percent threshold in 2013. Even more significant, though, was the Alternative for Germany, the right-wing populist party, which scored nearly 13 percent. Created to oppose the Euro, the continental currency that replaced the German Mark, the party had fallen short of entering the Bundestag four short years before. But the AfD switched its focus to immigration and capitalized on Germany’s acceptance of a million economic migrants in 2015, to great electoral success.

Although this political fracturing would have been unexceptional elsewhere in Europe, it was a new experience for Germany, which is accustomed to political stability. Seven parties now sit in the Bundestag. The CDU/CSU no longer marks the rightward limit of German politics. The AfD rejects traditional views on decorum and policy held by German elites.

Blame for the collapsing center falls on both major parties, but especially Chancellor Angela Merkel. She is her nation’s most successful politician since Konrad Adenauer, the country’s first post-war chancellor who guided his nation’s democratic revival and served for 14 years. But her success was achieved by shifting her right-leaning party leftward, including through two Grand Coalitions, or GroKos, with the SPD, and a coalition with the FDP. In all three cases, Merkel effectively squeezed disagreement and debate out of German politics and government.

Her reputation for being a pair of “safe hands” suffered in the aftermath of the surge of largely young, male, Muslim migrants who were admitted into her country more than two years ago. Although the number of immigrants has declined since 2015, the social impact remains, spurring the rebirth of the FDP and causing an explosion of support for the AfD, which has drawn votes from both right and left, and caused other parties to radicalize their own positions on the immigration issue.

After the September vote, the SPD rejected proposals to renew the Grand Coalition. So Merkel initially sought to reach an agreement with the FDP and Green Party, but the former feared again having its agenda submerged by Merkel’s formless centrism and pulled out of talks. Germany then faced the prospect of new elections, which likely would have produced a similar result, or a minority government with the CDU/CSU forced to seek support from opposition parties issue-by-issue.

But SPD leader Martin Schulz, former president of the European Parliament, came under pressure from officials across Germany and Europe to reverse course. The SPD then reached preliminary agreement with the CDU/CSU to negotiate a formal coalition. The German Marshall Fund’s Thomas Kleine-Brockhoff observed that the accord “has more of a left-liberal feel to it,” reading “as if governing is one big giveaway, freebies for all.” Indeed, the conferees essentially voted to blow the government’s entire $57 billion surplus.

The SPD central committee narrowly approved moving forward. Although formal coalition negotiations have been slow, a new GroKo is widely expected to result. However, grassroots SPD opposition is strong and the roughly 440,000 party members must approve any final agreement. One poll found less than half of SPD members in favor of a new GroKo. Moreover, membership applications have been rising, following an appeal from Jusos, the SDP youth organization, for opponents to join to vote no. This is a similar strategy to that of the left-wing group Momentum, which helped propel Jeremy Corbyn to the leadership of the British Labor Party.

If the vote is no, German politics will be in chaos. Merkel has rejected the idea of a minority administration, but current polls indicate that a new election would yield similar results, leaving the same governing choices.

Approval might be even more dangerous in the long term, however. The coalition prospectus is notable for its lack of ambition and refusal to make hard choices. Germans would see little difference between nominal left and right, which would make the AfD the official opposition as it took the lead against bland, leaderless governance. The FDP, Die Linke (descendent of East German communists), and Greens would also highlight their differences with the center blob.

Facing almost certain death would be Berlin’s promise to spend 2 percent of GDP on its military by 2024. The pledge was never realistic—last year Germany hit just 1.22 percent, and that number is falling to 1.13 percent this year—and now the draft GroKo budget shows Germany’s military would be at just 1.15 percent of GDP in 2021.

Also arrested would be Schulz’s surprising ascendance, along with his agenda of radical EU expansion, “a new constitutional treaty to establish the United States of Europe,” as he called it. The possibility of stopping Schulz has caused European leaders to encourage a GroKo for their own purposes. They hope a new coalition government will back EU “reforms” to strengthen central control and subject national authorities to greater oversight from Brussels.

However, few Germans want their money distributed to what they see as highly indebted wastrels. Indeed, it’s hard to imagine a policy more likely to antagonize frugal, stolid, patriotic Germans. One CDU leader called Schulz’s proposals “dream dancing.” The preliminary coalition agreement offered more rhetoric than substance on the issue and is unlikely to deliver much in practice. If a GroKo did shift more money and authority to Europe, it almost certainly would drive more voters to the FDP, which ran against Brussels as well as the AfD.

All this is characteristic of the general experience elsewhere in Europe. The Eurocratic leadership has attempted to force its agenda on the continent irrespective of what people actually want, and its policies are designed to avoid any requirement for popular consent. However, every time elites run roughshod over those they supposedly represent, popular resistance grows. The longer mainstream politicians refuse to debate controversial issues, the more their publics turn to less creditable representatives. If the CDU/CSU won’t represent those leaning to the right and the SPD won’t stand for those leaning to the left, Germans are likely to continue turning to other parties, especially the AfD, which has gained from both ends of the traditional political spectrum. Although Berlin’s problems have been wildly exaggerated by some—despite the current delay in forming a governing coalition, in no way does Germany resemble the Weimar Republic in its dying days—rising populism in Germany is adding to an electoral flood tide challenging Europe’s democratic deficit.

Obviously, it is up to the German people to decide on their government. But another GroKo would suggest that they don’t matter, that the major parties are acting as guardians only of the status quo. Daniel Hannan, a British member of the European Parliament, has warned against what he called “cartel democracy,” in which there is no meaningful opposition offering a potential replacement government. “It is not healthy, in any country, for most of the parties to be in office most of the time,” he says. In Europe voters increasingly have had to turn to more extreme parties as “battering rams to smash open the old system.” The AfD is acting as such an instrument in Germany.

Although another election likely wouldn’t solve anything, a minority government would at least delineate the differences between the CDU/CSU and the plethora of opposition parties. The SPD would become Merkel’s chief antagonist—which is why some Social Democrats advocate this option. They see the party’s political revival as possible only outside of government.

The other alternative, ruled out by Merkel and Berlin’s elite, would be to explore a coalition with the FDP and AfD. There are good reasons to avoid empowering the latter, with its decidedly illiberal policies and rhetoric and ascendant hardline faction. But the party is not fascist and is less likely to drift further right if part of a governing coalition where its views will be forced to merge with those of other vaguely right-leaning parties. Instead of leading opposition against the establishment, the AfD would become part of the establishment and bear responsibility for the results. This may be the best strategy to reduce its long-term political appeal.

Other European governments have adopted this approach. The nationalist, populist True Finns (renamed the Finns Party) split after joining Finland’s government in 2015. The new Austrian government has brought in the far-right, anti-immigrant Freedom Party, replacing an earlier Austrian GroKos. Despite fears expressed by some EU leaders, the Freedom Party has served before as part of a governing coalition and agreed to drop some of its stronger anti-EU positions. In return the new government has pledged to tighten immigration controls.

In Hungary and Poland, mainstream parties have advanced hardline nationalist/populist policies; they, along with the Czech Republic, have been particularly insistent in refusing to fulfill EU quotas for taking refugees. Some of the resulting policies are ugly, but they do not threaten their neighbors or the EU. Upcoming elections might result in a Euroskeptic government in Italy, but nothing likely to be truly radical.

Whether one views this process as positive is irrelevant. Increasing numbers of voters across Europe (and in America) are refusing to accept traditional political cartels. Governing parties, elites, and coalitions are going bankrupt all over the continent. Establishment forces are turning to increasingly desperate measures to hold together the existing regime.

German politics today reflects these trends. Another GroKo might put off the crisis for four more years, but at some point the German people are going to take charge and demand a real debate over real change. If so, the sooner that occurs, the better.