Not Even the Military Thinks Landmines Are a ‘Vital Tool’

Trump's recent reversal of Obama's landmine ban was not only a petty political move but just another boondoggle for the Pentagon. 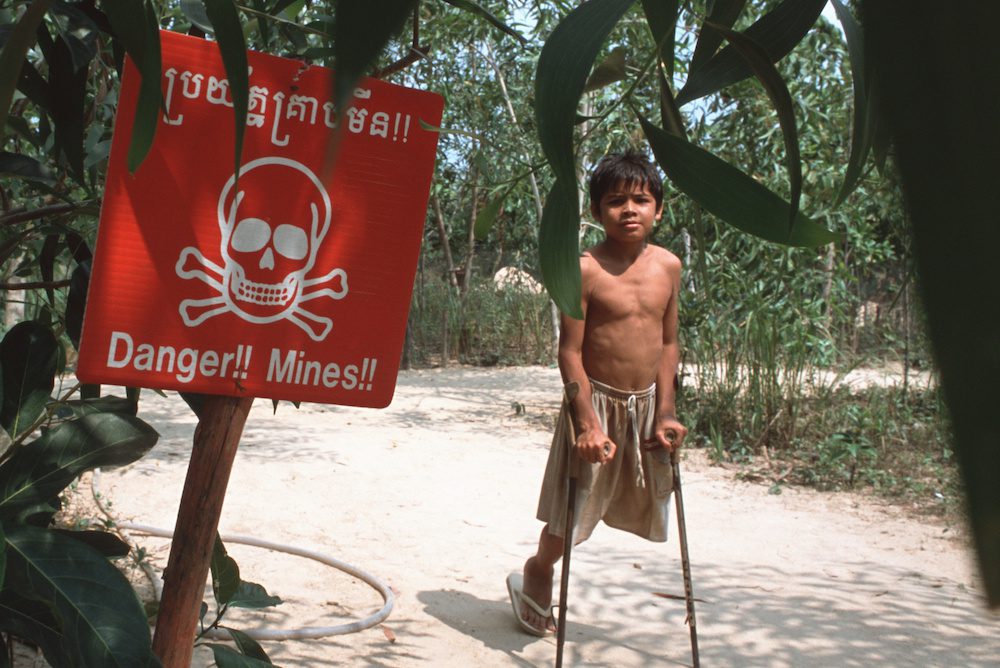 Sot Tol uses crutches to walk across the grounds of the Landmine Museum that has been built by Aki Ra near Siem Reap in Cambodia. He lost his leg to a land mine when playing with three other kids all of whom died after they found and played with a land mine that they thought was a toy. (Photo by Peter Charlesworth/LightRocket via Getty Images)

On the morning of March 17, 1996, The New York Times published an article by reporter Ray Bonner saying that General John Shalikashvili, then the chairman of the Joint Chiefs of Staff, was considering recommending that the Clinton administration ban landmines once and for all.

The landmine issue was then high on the international agenda—the result of the tens of thousands of innocent people being maimed and killed from stepping on mines left over from previous wars, particularly in Afghanistan, Angola, Bosnia, Cambodia, Laos, and Vietnam. The mine ban movement had come up with a simple formula to describe the carnage: landmines were “a weapon of mass destruction in slow motion.”

Bonner’s article arrived like a thunderclap at the Pentagon. While the J.C.S. had been studying the issue and there was little support for landmine use among senior military officers, Shalikashvili had yet to make an official recommendation. But now that the debate was public, he’d moved to resolve it. Over a period of two weeks following the article’s appearance, he polled senior U.S. commanders (more than a dozen officers in all) to assess their views. Would they approve a ban? All said yes, except for General Gary Luck, the commander of U.S. forces in South Korea. He needed landmines, he said, and would not give them up.

At the Vietnam Veterans of America Foundation, an NGO that operated prosthetic clinics for landmine victims, Bobby Muller—who had co-founded the International Campaign to Ban Landmines and who I was working with at the time—directed me to contact military officers who could get Luck to change his mind. I called retired General James Hollingsworth at his home in Texas and he agreed to give it a try.

Hollingsworth was a renowned combat commander in World War II and Vietnam and had served as a senior U.S. commander in Korea in the early 1970s. While there, two U.S. servicemen had been killed by an American landmine left over from the Korean War while playing golf. Hollingsworth was enraged: landmines weren’t killing the enemy, they were killing Americans. But when Hollingsworth called Luck, the Korea commander wouldn’t budge. You’re not the commander here now, Luck told Hollingsworth. I am. If Luck had agreed with Hollingsworth, the military would have likely recommended that the White House approve the ban. Instead, the U.S. settled for second best: increasing restrictions on landmine use and spending hundreds of millions to develop alternatives to landmines, as well as billions to locate and remove them. For nearly 30 years, the U.S. has followed that policy, along with a 2014 ban by President Obama on all landmine use outside of Korea.

That is, until last week, when the Trump administration announced it was reversing Obama’s 2014 order. The decision would permit the U.S. to use the “Gator,” “Volcano,” and “M-131” mine systems currently stored in Korea anywhere in the world. More crucially, it would allow the deployment of more technically advanced landmine systems, currently under development, to Europe (and specifically, as a Pentagon official told me, to Eastern Europe) as a deterrent against a possible Russian tank attack.

Trump’s January 31 decision was met with widespread condemnation among those who had been at the forefront of ban efforts. Senator Patrick Leahy called the decision “disappointing, reflexive and unwise.” He went on to note that “the policy that has been in place, limiting the use of this inherently indiscriminate weapon to the Korean Peninsula, was the culmination of nearly 30 years of incremental steps, taken by both Democratic and Republican administrations after extensive analysis and consultation, toward the growing global consensus that anti-personnel mines should be universally banned.”

NGO ban proponents reacted similarly: “The resumption of the use of anti-personnel landmines and continued stockpiling and production of these indiscriminate weapons is militarily unnecessary and dangerous,” Daryl G. Kimball, executive director of the Arms Control Association, said in a statement.

Leahy and Kimball weren’t alone in their condemnations. A senior Pentagon civilian familiar with the internal discussions in the lead-up to the Trump decision says the White House was motivated primarily by Trump’s animus towards Barack Obama. “The new policy has nothing to do with landmines, or helping the military,” a senior Pentagon official told TAC just after the announcement last week. “This is all about Obama.”

In truth, the landmine issue itself has never been about landmines. Back in 1996, after Gary Luck claimed that he needed landmines in Korea, Shalikashvili went back to his colleagues in the tank (the ornate mahogany and flag-bedecked room in the Pentagon where the J.C.S. meets) to assess their views. With Luck’s objection in hand, Army Chief of Staff Dennis Reimer fired off the opening salvo in what has been an under-the-radar, 30-year tussle over the issue—which focuses not so much on landmines as on who should be allowed to decide which weapons the U.S. military uses.

The landmine issue is a slippery slope, Reimer argued. “Once the NGOs force the Army to get rid of landmines,” he was quoted as saying, “which service will be the next to be disarmed?” For Reimer, landmine advocates looked like the American wing of the Supreme Soviet—if we lose Saigon, they’ll soon be in downtown Santa Barbara: once the dominos start falling, these do-gooders will be trying to ban our rifles.

Over the months that followed, Reimer’s viewpoint took root inside the military. Bobby Muller (who’d been severely wounded as a Marine officer in Vietnam) and his VVAF apostles, a group of senior military officers whispered, had a secret plan to disarm America—with a landmine ban being the first step. That most senior military commanders had already conceded that they didn’t need landmines (“In all of my three decades in the military,” retired J.C.S. Chairman David Jones, who supported a ban, told Muller, “I don’t think I ever heard landmines mentioned a single time”), didn’t really matter. What mattered was the principle of taking a weapon out of the U.S. arsenal, which had happened in only one other case—when the military had agreed to a ban on chemical weapons.

The military is bound by tradition and law to obey civilian directives, but senior military officers are adamant that how they fight, and with what, is up to them. That is true for landmines. General Eric Shinseki (who lost half a foot in a landmine incident in Vietnam and was Reimer’s successor) confirmed this in a conversation about landmines with Senator Patrick Leahy several years after the 1997 debate. “We don’t want ’em, we don’t need ‘em, we don’t use ’em—and we’re not going to get rid of them,” he said.

The landmine issue is (manifestly) a footnote when compared to the globe’s other threats, like nuclear proliferation and climate change. But it remains a useful talisman of how change happens (or doesn’t) in Washington. Since the Shinseki-Reimer days, military efforts to hang onto landmines have become a kind of shell game that depends for its success on the naivete of the American public, the escalation of pretended threats, questionable claims about America’s ill-preparedness, and the need to feed the insatiable appetite for the development of new, expensive, unnecessary, and redundant weapons’ technologies.

Landmines were never important to the military—until NGOs tried to ban them. Then, suddenly, we couldn’t do without them. So it is that the military has spent hundreds of millions of dollars on a replacement program for the Gators, Volcanos, and M-131s that the Pentagon now wants to use outside of Korea. The replacement program, the Pentagon claims, would provide mines that have a “man in the loop”—that will only explode when an operator determines an enemy is present.

That sounds good, but in some cases the effort has been accompanied by nonsensical labels: weapons developers claim they are designing “safe landmines,” that their efforts are focused on “humane weapons” and that the mines they have are “smart” because they turn themselves off, while failing to mention that they’re dumb and lethal until they do. Some of the new designs have reflected the labels. In one case, weapons designers proposed deploying canisters of nets that would blanket the battlefield, ensnaring the enemy in coils of ropes. The proposal brought derisive hoots from senior military officers: “If the weapons I have don’t make the enemy shit his pants,” a senior officer told me, “then I’m not interested.”

The most recent iteration in the landmine replacement program is the “Networked Bottom Attack/Top Attack Common Anti-Vehicle Munition,” being proposed by weapons designers at Picatinny Arsenal. The $100 million-plus program was established in 2016 by the Army to develop “networked” mines that could be deployed on the ground and detonated manually by a soldier at a remote location—which would make them compliant with international norms banning anti-personnel landmines. This new replacement makes the Army salivate—even though it’s likely that the Common Attack Vehicle Munition is redundant. Ban advocates have long since identified more than half a dozen weapons in the U.S. arsenal that do the same thing as the proposed Picatinny replacement, including the Brilliant Anti-Tank submunition (dispensed from a missile), the CBU-97 Sensor Fused Weapon (delivered by aircraft), the helicopter delivered AGM-114 Longbow Hellfire air-to-ground missile, and the aircraft delivered Maverick Air-to-Ground Missile (AGM-65).

But even if the proposed Picatinny weapon is not redundant, it’s still not clear why it’s actually needed. While the Trump administration claims that restricting the use of anti-personnel mines places the U.S. military “at a severe disadvantage against our adversaries,” that hasn’t ever been true. If it was, why haven’t we used them in Afghanistan, Iraq, or Syria? In fact, the last time we used landmines was in 1991. In that instance, during the first Gulf War, they actually inhibited the maneuverability of the U.S. “left hook” into Iraq, when an American armored commander refused to order his troops across a field strewn with “smart mines.”

While he was assured that the minefield was “safe” (the weapons had turned themselves off, he was told) he decided not to take any chances—and ordered his troops to follow a wide arc around the minefield. While the Common Attack Vehicle Munition is designed to solve that problem, it’s still not clear that, when and if it is deployed, it will do what it’s supposed to do—which is to channel the swarms of Russian tanks (presumably invading Lithuania, Latvia, or Estonia) into killing zones where they can be destroyed by U.S. anti-armor weapons. And the reason that’s not clear is because the Russians don’t actually have swarms of tanks—and even if they did, they wouldn’t do something as stupid as invade Eastern Europe.

Which places in doubt the claim made last week by Vic Marcado, the acting assistant secretary of defense for strategy, plans and capabilities: “Landmines, including APL [anti-personnel landmines] remain a vital tool in conventional warfare that the United States military cannot responsibly forgo, particularly when faced with substantial and potentially overwhelming enemy forces in the early stages of combat.”

“There’s a word for this,” a senior Pentagon official told me last week in the wake of Mercado’s statement, “and the word is boondoggle.”