How to Truly Take Down the Monopoly Man

On these pages we've tackled economic concentration in tech, pharma, beer, and more. So what's being done about it? 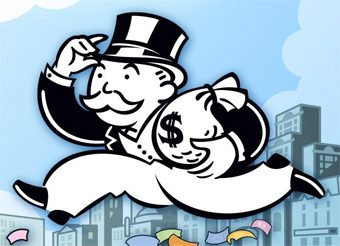 For the past year, The American Conservative has provided a platform to write about monopolies and the problems of concentration. This is the last piece in the series.

On these pages, we have been able to cover the growing monopolization of the internet, healthcare, pharma, and beer. We’ve also covered the soft corruption at the DOJ and FTC and the judicial activism poisoning any proper antitrust enforcement.

A growing chorus is warning of the dangers of monopolies. Over the past two years, we have seen a flowering of new writing on monopolies and antitrust that challenges the status quo. A few of the most notable examples are:

All of these books are worth delving into if you want to better understand how the U.S. has become a land of monopolies and oligopolies.

It would be tempting to conclude that greater exposure of the problems of concentration and new ideas might lead to reform.

But the books and the articles in the press alerting to the dangers of monopolies will not bring reform. The FTC and DOJ have no interest in enforcing the laws as written and have been busy gaslighting the public. They are all part of the revolving door crowd, making millions of dollars representing monopolies, doing a stint in government and then returning to their old law firms to argue against antitrust enforcement. The poachers turned gamekeepers are so deeply conflicted, they will never enforce the laws to the detriment of their former and prospective clients.

So far, we have seen the introduction of a few much-needed bills to prevent further concentration. These, however, are almost all piecemeal, limited approaches. They attempt to put band aids on specific sectors, not reform antitrust laws comprehensively.

For example, Cory Booker, a Democratic senator from New Jersey, has introduced a bill to prevent further consolidation in the agricultural sector. The U.S. agricultural sector is rife with oligopolies in all areas: seeds, poultry, pork, beef, milk, and the trading of grains. It is one of the most highly concentrated sectors of the economy with large oligopolies standing between consumers and farmers.

The bill would place a temporary ban on mergers in the agricultural sector. It would also create a commission to beef up antitrust enforcement in the agriculture industry. However, the bill is limited in its ambitions and duration: it would only be valid for 18 months, or until more comprehensive legislation is passed.

Likewise, Representative David Cicilline and Judiciary Committee Chairman Jerrold Nadler introduced the Affordable Prescriptions for Patients Through Promoting Competition Act of 2019 to prohibit pharmaceutical companies from engaging in anticompetitive “product hopping.” The bill would bar the many tactics and gimmicks that drug makers use to extend their patents almost indefinitely. These tactics allow the pharmaceutical companies to charge monopoly prices long after the original patents expire.

The bill, much like Booker’s, only addresses one sector. The problem of monopoly is economy-wide.

Rep. Cicilline has been extremely active on antitrust. He has introduced the Journalism Competition and Preservation Act today to provide a safe harbor in current antitrust laws. The bill would give newspapers and publishers to right to bargain against Facebook and Google.

As Rep. Cicilline noted in his announcement of the bill, “Nearly 3 out of every 4 Americans get news from platforms controlled by these two corporations. Currently, the duopoly is capturing 83 percent of all digital ad revenue growth and 73 percent of total U.S. digital advertising.” The bill would attempt to redress this imbalance of power.

Rep. Cicilline has suggested, much like Senator Booker, that the tech giants not be allowed to conclude any mergers until the FTC and DOJ have finished their reviews of the Silicon Valley giants.

These approaches, though, only target specific sectors such as agriculture, media, or pharmacy. What is needed is a much more ambitious wholesale reform of antitrust. The only candidate who has proposed anything like this is Senator Elizabeth Warren.

Sen. Warren has drafted a bill that would call on regulators to retroactively review about two decades of “mega mergers” and ban such deals going forward. The bill, tentatively named the Anti-Monopoly and Competition Restoration Act, is coauthored with Rep. Cicilline.

Warren’s staff have circulated a proposal for wholesale anti-monopoly legislation making mergers among large firms much more difficult. The bill would reject the Chicago School’s consumer welfare standard, which holds that only low prices matter. The bill would direct the government to also consider the impact on innovation, privacy, and workers.

The desire to stop monopolies and industrial concentration is not only a concern of Democrats, of course. Congressman Jim Banks, a Republican from Indiana, recently introduced the Hospital Competition Act of 2019. This bill aims to freeze the practice of hospital consolidation to fight local monopolies. The bill is long overdue, but it only addresses one sector.

It is not clear what the outcome will be: whether we will see any antitrust reform at all, if we’ll get a piecemeal approach, or if we’ll see a comprehensive reform.

As representatives and senators ponder what bills should be passed to deal with monopolies, we humbly suggest the path to reform:

The consumer welfare standard is not the sole reason for antitrust. Antitrust was created to make sure that economic and political power was not concentrated in the hands of monopolists.

Mergers that materially reduce the number of competitors should be prevented. Today merger enforcement is dead. Over 90 percent of mergers close, and antitrust cases are almost never challenged. Companies should be able to grow organically, and any merger that artificially increases the market share of a dominant firm should be prohibited.

The standard for rejecting mergers must be based on simple, clear rules. The easiest rule of thumb is that industries of fewer than six players should not be allowed to merge. Without clear standards, companies with vast resources will employ economists for hire who will use theoretical models to justify even outright monopolies on the grounds of efficiency and consumer welfare.

Previous mergers that have reduced competition should be reversed. Unless we right previous wrongs, we cannot fix markets. Many mergers have been approved over the past few decades that have created monopolies and lessened competition. When the courts broke up trusts in the 20th century, the world did not end, and society benefited.

Local monopolies should be broken up. For example, the McCarran Ferguson Act exempted insurance companies from antitrust and subjected them to state regulation where they enjoy local monopolies. Similarly, the hub and spoke model of airports has created local monopolies and duopolies. Airlines should be forced to divest routes to restore competition.

Industries should not be exempt from antitrust supervision. Unions have specifically been exempted from antitrust, as collective bargaining does not represent a restraint of trade. However, many industries have gained exemption over the years, for example the insurance industry.

Antitrust trials should be sped up rapidly. Laws are not enforced in part because individual cases, such as the Justice Department’s Microsoft investigations, can last for a decade. Before 1974, the rules allowed trials to skip appellate review and automatic appeals of district courts’ antitrust decisions to the Supreme Court. We must eliminate frequent appeals.

Regulatory capture and the revolving door are evils that should be avoided at all costs. Rules should ban moves between industry and government, as well as restrict the ability of legislators and members of the executive from lobbying on behalf of companies.

Create common carriage rules for internet platforms that sell third party services. Carriers must treat all customers equally and transparently. Without common carriage, dominant transportation companies can decide what packages get delivered at what cost and what speed, discriminating against clients.

Patents and copyrights must only be granted for a limited time without extensions. Innovation and creativity must be rewarded, but only for a limited time. Extending the life of patents, even through bureaucracy and regulation, is the granting of a private monopoly.

Competition must be encouraged once patents expire. Congress should remove patent protection for areas that are rife with abuse. Almost half of all patents are for things like software and business methods that have been abused by “patent trolls” who drive up costs for producers and consumers. Product hopping in pharma should be banned, and faster approval of generics, and the importation of generics from Canada and Europe, must be allowed to promote competition.

New laws will be needed, not only to address the failings of the current system, but to clarify what the doctrines guiding antitrust are. Chris Sagers, a law professor at Cleveland State University, has said that even laws won’t change the situation: “I don’t think you’ll have new antitrust policy until Congress says the courts have incorrectly interpreted the statutes.”

Nothing will be done without changing the judicial situation. Due to judicial activism, antitrust laws and their enforcement today bear no relation to the intentions of those who passed the laws and the way they were applied for decades.

Laws will be needed that explicitly reject the consumer welfare standard, which ignores every manner of economic and social harms from concentration as long as prices are low. The reforms must establish clearly the goals and aims of antitrust, specifically rejecting the pro-monopoly approach that the judiciary has imposed, essentially neutering antitrust acts.