American exceptionalism fans imperial designs. We must reject it. 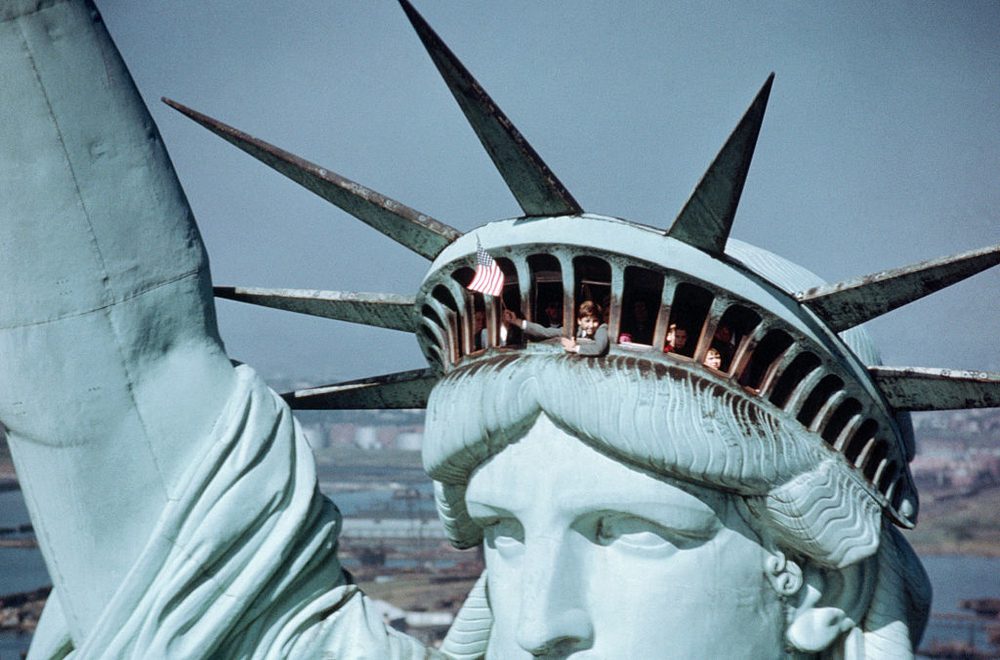 A child waves the United States flag from the crown of Liberty Enlightening the World, less formally known as The Statue of Liberty, on Liberty Island in New York Harbor. | Detail of: 'Statue of Liberty' by Frederic Auguste Bartholdi.

Reactions to globalization, the Trump presidency, and the coronavirus pandemic have turned discussions of American conservatism increasingly into discussions of “nationalism.” Regrettably, terminological confusion is rampant. Both “conservatism” and “nationalism” are words of many and even contradictory meanings.

The strengths of post-World War II American intellectual conservatism have been widely heralded. As for its weaknesses, one trait stands out that has greatly impeded intellectual stringency: a deep-seated impatience with the supposedly “finer points” of philosophy. Making do with loosely defined terms has made conservatism susceptible to intellectual flabbiness, contradiction, and manipulation.

This deficiency is connected to a virtual obsession with electoral politics. William F. Buckley’s path-breaking National Review was an intellectual magazine, but its primary purpose was to prepare the ground for political victories, most of all for capturing the presidency. The desire to forge a political alliance among diverse groups pushed deep intellectual fissures into the background. Having a rather narrowly political understanding of what shapes the future, most conservatives thought that the election and presidency of Ronald Reagan signified the “triumph” of conservatism; but the triumph was hollow. The reason is that in the long run politicians have less power than those who shape our view of reality, our innermost hopes and fears, and our deeper sensibilities. A crucial role is here played by “the culture”—universities, schools, churches, the arts, media, book publishing, advertising, Hollywood, and the rest of the entertainment industry—which is why America kept moving leftward.

For post-war so-called “movement” conservatives, conservatism meant chiefly limited government, a free market, anti-communism, and a strong defense. These tenets were all focused on politics, and vastly different motives hid behind each of them. Why were these tenets called “conservatism”? Rather than point to a few policy preferences, should that term not refer to a general attitude to life, a wish to conserve something, the best of a heritage? One thinks of the moral and cultural sources of American liberty and constitutionalism. But, outside of ceremonial occasions, most movement conservatives placed their emphasis elsewhere.

A striking example of philosophical messiness and confusion is that the conservative movement even incorporated clearly anti-conservative ideas, specifically, the anti-historicism advanced by Leo Strauss and his followers. Strauss championed what he called “natural right,” which he saw as sharply opposed to tradition. He called the latter “the ancestral” or “convention.” To look to them for guidance was to be guilty of the great offense of “historicism,” by which he meant moral relativism or nihilism. History, Strauss insisted, is irrelevant to understanding what is right. Only ahistorical, purely abstract reason is normative.

Hampered by a lack of philosophical education, many Straussians have been oblivious to the far-reaching and harmful ramifications of this anti-historicism. By blithely combining it with ideas of very different origin, they have concealed, even from themselves, its animosity to tradition.

One of Strauss’s most influential disciples, Harry Jaffa, made the radical implications of Straussian anti-historicism explicit. In his view, America’s Founders did not build on a heritage. They deliberately turned their backs on the past. Jaffa wrote: “To celebrate the American Founding is…to celebrate revolution.” America’s revolution belonged among the other modern revolutions. It is mild “as compared with subsequent revolutions in France, Russia, China, Cuba, or elsewhere,” he wrote, but “it nonetheless embodied the greatest attempt at innovation that human history had recorded.” The U.S. Constitution did not grow out of the achievements of ancestors. On the contrary, radical innovators gave America a fresh start. What is distinctive and noble about America is that, in the name of ahistorical, abstract, universal principles, it broke with the past.

This view flies in the face of overwhelming historical evidence. The reason the Founders were upset with the British government is that it was acting in a radical, arbitrary manner that violated the old British constitution. John Adams spoke of “grievous innovation.” John Dickinson protested “dreadful novelty.” What the colonists wanted, Adams wrote, was “nothing new,” but respect for traditional rights and the common law. The Constitution of the Framers reaffirmed and creatively developed an ancient heritage.

The Jaffaite notion that America rejected the past and was founded on revolutionary, abstract, universal ideas contributed to what this writer has termed “the new Jacobinism.” According to this ideology, America is “exceptional” by virtue of its founding principles. Since these principles belong to all humanity, America must help remake societies around the world. “Moral clarity” demands uncompromising adherence to the principles. The forces of good must defeat the forces of evil. Inherently monopolistic and imperial, American principles justify foreign policy hawkishness and interventionism.

Compare this notion of America to what is implied in Benjamin Franklin’s famous phrase about what the Constitutional Convention had produced—“a republic, if you can keep it.” To sustain the Constitution, Americans would have to cultivate the moral and cultural traits that had given rise to it in the first place. To be an American is to defend an historically evolved inheritance, to live up to what may be called the “constitutional personality.” Only such people are capable of the kind of conduct that the Constitution values and requires. Americans must, first of all, be able to control the will to power, beginning with self. They must respect the law, rise above the passions of the moment, take the long view, deliberate, compromise, and respect minorities. Whether applied to domestic or foreign affairs, the temperament of American constitutionalism is modesty and restraint. There is no place for unilateral dictates.

These contrasting views of America entail wholly different nationalisms. The moralistic universalism of American exceptionalism, with its demand that all respect its dictates runs counter to the American constitutional spirit of compromise, deliberation, and respect for minorities. Exceptionalism does not defuse or restrain the will to power, but feeds it, justifying arrogance, assertiveness, and even belligerence.

During the presidency of Donald Trump many proponents of American exceptionalism who want preferment have recast their anti-historical universalism as “nationalism,” showing that the term can mean almost anything. It is now “nationalist” to demand that American principles be everywhere respected. For example, Mike Pompeo, a person of strong appetites and great ambition, has put this belief behind his campaign of assertiveness and “maximum pressure.”

In a speech in the spring of 2019, Pompeo declared that America is “exceptional.” America is, he said, “a place and history apart from normal human experience.” It has a mission to oppose evil in the world. America is entitled to “respect.” It should dictate terms to “rogue” powers like Iran and confront countries like China and Russia that are “intent on eroding American power.” This speech was given and loudly cheered at the 40th anniversary gala of the Claremont Institute in California, whose intellectual founder was—Harry Jaffa.

What may seem to political practitioners and political intellectuals to be hair-splitting philosophical distinctions can, on the contrary, have enormous practical significance. American exceptionalism is in important ways the opposite of a conservatism or a nationalism that defends the moral and cultural heritage that generated American constitutionalism. Exceptionalism fans imperial designs. The culture of constitutionalism opposes them.

Claes G. Ryn is professor of politics and founding director of the new Center for the Study of Statesmanship at The Catholic University of America. His many books include America the Virtuous and A Common Human Ground, now in a new paperback edition.