Home/Articles/Ideas/A Good Guy With a Gun Runs, Too
Ideas

A Good Guy With a Gun Runs, Too 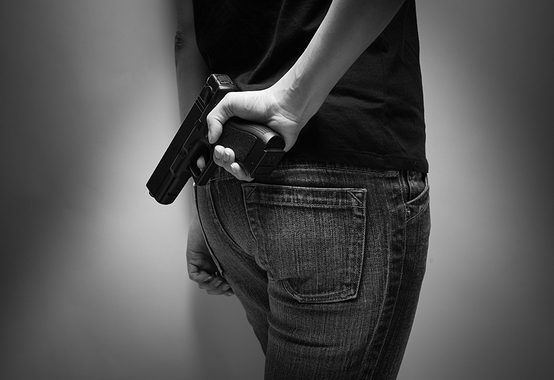 After every mass shooting in the U.S. you hear the same arguments from the same people. One group blames lax gun laws. The other group says more guns equal less crime. These are polarized positions to say the least.

Gun access aside, last week’s shooting in Orlando is vastly more complex than it originally appeared. Evidence continues to build that the shooter, Omar Mateen, while definitely a Muslim, was also gay. Presumably a self-loathing one. Meanwhile, there’s no evidence he’d ever been in contact with ISIS. This complicates the simple portrayal of a jihadist and serves nobody’s purpose, although it does seem to be getting progressively more play. The media initially consistently misidentified his rifle, repeatedly claiming it was the highly-popular AR-15 when it’s actually a weapon that bears no semblance to the sibling of the military M-16. So they changed the wording to “AR-15 style,” which isn’t true either. They wanted continuity between this massacre and earlier ones that did use the AR-15—and they “found” it.

So too with the whole gun law issue. Yes, the U.S. has extremely lax gun laws and a much higher gun-related homicide rate compared to other “advanced” nations, but the U.S. isn’t those other countries. Every country has its own culture of violence, and there are so many different demographic and other inputs that one can never fully compare any two. Why does Venezuela have the highest civilian homicide rate of any country in the world, while those of every other South American country are vastly lower? As near as I can figure it, Venezuelans like killing each other. One finds authoritative-sounding assertions such as that in the far-left magazine The Nation saying that “Epidemiologists at the University of California, San Francisco, conducted an extensive analysis of data from 16 previous peer-reviewed studies, and found that having access to a firearm makes a person almost twice as likely to become the victim of a homicide.” That becomes meaningless once you consider that people who buy firearms are different from those who don’t.

Among those saying silly things in the wake of the Orlando gay nightclub massacre is presumptive GOP presidential candidate Donald Trump. “If you had some guns in that club the night that this took place, if you had guns on the other side, you wouldn’t have had the tragedy that you had,” he told CNN on Monday.

This is where you should raise your hand and meekly stammer, “Um, Mr. Trump, how do you know none of the club patrons weren’t carrying guns?” Simply because nobody used them? Apparently there were a number of people packing heat at the site of Oregon’s worst mass shooting last October. They elected to keep the heat packed.

As the shooter’s own actions showed, it’s as easy to buy firearms in Florida as it is to chew gum. Granted, it’s harder to get a concealed carry permit, but surely lots of people skip that step. Cops don’t routinely frisk non-criminals. So out of hundreds of patrons, none were armed? Really?

It would be astounding to think that of the hundreds of patrons there that night, none were carrying. All we know for sure is that no guns were used.

Some assume that one or more armed good guys can be expected to bring down the bad guys in such situations. But the bad guys, after all, are bad. Off-the-scale monsters. Human beings to them are ducks on a wheel at the midway and they usually know it’s going to end with their own deaths. Mateen did. They often train for their heinous acts as well. Hitting 103 people trying desperately not to be hit, even in a packed area, takes some skill.

The good guys, however, rarely have such advantages.

Even police normally just train against cardboard targets, safe in the knowledge no cardboard target has ever fired back. That is why we get incidents in which cops shoot unarmed suspects. (And when the suspect is black it’s then used as proof of racism.) Further, often the suspect is so full of lead as to become a human paperweight. Why? Because the police essentially emptied their magazines or their revolver cylinders. Why? Because they were afraid. Their training has not prepared them for this moment and it’s their first such encounter. Even in the most violent areas of America’s most violent cities, most cops won’t ever fire a shot in anger. Forget your favorite “CSI” series where the expert lab technician can also drop a criminal with a single shot to the heart.

Now add that it’s against our biology to kill other humans. In today’s society, probably few have what it takes to slaughter an animal. Meat comes from store shelves, after all. David Grossman’s fascinating 1996 book On Killing: The Psychological Cost of Learning to Kill in War and Society is filled with evidence that prior to this century’s conflicts, most U.S. troops could not actually aim directly at the enemy. At best they kept their heads down while the few who could kill did so. In one special-ops school I attended in the Army we had to kill animals with our bare hands. And it wasn’t because we were hungry and there were no weapons around.

Even when I was covering the Battle of Ramadi as a photojournalist, the only way I absolutely knew that the men were aiming at their targets was when they actually shot them. I suspect almost all of them were indeed shooting to kill, but these were also men from elite units, the Navy SEALs or the 101st Airborne, and by the time I arrived they’d been in almost daily firefights for over a month. Plenty of time to work out the jitters. Yet my best enlisted buddy from Iraq is still traumatized over the four al-Qaeda terrorists he had to kill to protect the rest of us.

Mind the other takeaway from that example. These men had been shooting and getting shot at constantly, more each day than the typical big-city cop sees per lifetime, much less the average civilian with that sleek one-eyed blue steel beauty he picked up at Wal-Mart.

It’s Okay to Be a Hero, So Long as You’re a Live One

Then we have that nasty “getting killed” aspect. Despite Patton’s famous admonition, being killed for your country is indeed a part of the soldier’s job. Once thrust into that position, it is a most powerful incentive to shoot to kill. Even if you don’t care about your own life, you’ve got a duty to your buddy. And if you don’t at least fire your weapon, those buddies and their commanders will notice.

But in any given mass shooting, most of the victims will survive. And those who do tend to be the ones drawing the least attention to themselves. They play dead. What do you do by whipping out a weapon and firing at (or shall we say “towards”) that guy who seems perfectly at ease plunking everyone around? Attract attention. There is a possibility of saving lives, of being a hero, and an even more real one of being shot dead or maimed yourself. As soldiers that was our job. It’s a cop’s job, too. It’s not that of a civilian.

And so they don’t act. Usually. Time and again we hear of massacres where it beggars belief that nobody was carrying a concealed weapon, such as the 2012 theater shooting in Aurora, Colo.—another state with extremely lax gun laws. Yes, there are exceptions. And as with Americans who contract bubonic plague, you’ll tend to hear about them precisely because they’re so rare. A “Study of Active Shooter Incidents in the United States Between 2000 and 2013,” prepared for the FBI, found that only 3.1 percent of the time “the shooting ended after armed individuals who were not law enforcement personnel exchanged gunfire with the shooters,” whereas 13.1 percent of the time “the situation ended after unarmed citizens safely and successfully restrained the shooter.”

Indeed, a day before the Orlando shooting, a deranged fan shot singer Christina Grimmie, also in Orlando. The victim’s brother tackled him. And then you get incidents like that at a north Houston gas station in September, in which a witness to an attempted carjacking whipped out a pistol—and proceeded to accidentally shoot the victim in the head. (He survived). The would-be Good Samaritan grabbed his spent shells and sped off into the night.

(I’ve never carried a firearm as a civilian but on two occasions,when I was living in Colombia, I was attacked with knives and on others with poles and clubs. I’m still here because of martial arts and boxing training and because I had learned that if you keep your wits about you, you’ll almost always win because most attackers are scared.)

I haven’t raised any Second Amendment issues, endorsed any presidential candidates, nor come to any truly solid conclusion about the Orlando incident. For which I’ll be accused of all three. Nothing seems to anger people more than not taking their position on gun laws, even when you’re not taking a position against them either. “Yer either with us, or agin’ us!”

Yet ultimately mass shootings are not good fodder for such discussions anyway. Notes UCLA law professor and savant Eugene Volokh, “Always keep in mind that mass shootings in public places should not be the main focus in the gun debate, whether for gun control or gun decontrol: They on average account for much less than 1 percent of the U.S. homicide rate and are unusually hard to stop through gun control laws (since the killer is bent on committing a publicly visible murder and is thus unlikely to be much deterred by gun control law, or by the prospect of encountering an armed bystander).”

Instead of mindlessly accepting anybody’s self-serving rhetoric, we should ponder the realities of this horrible incident. No, it wasn’t “political correctness” that killed and wounded over 100 nightclub patrons, as some have charged. But neither did Florida’s laws allowing easy access to firearms prevent it.

Michael Fumento is a veteran of the 27th Engineer Battalion (Combat)(Airborne) who was a photojournalist three times in Iraq and once in Afghanistan. He’s currently a freelance writer and attorney living in Colorado.