A Structure of French Style and American Proportion

The Aisne-Marne cemetery chapel ranks among the finest World War I monuments. 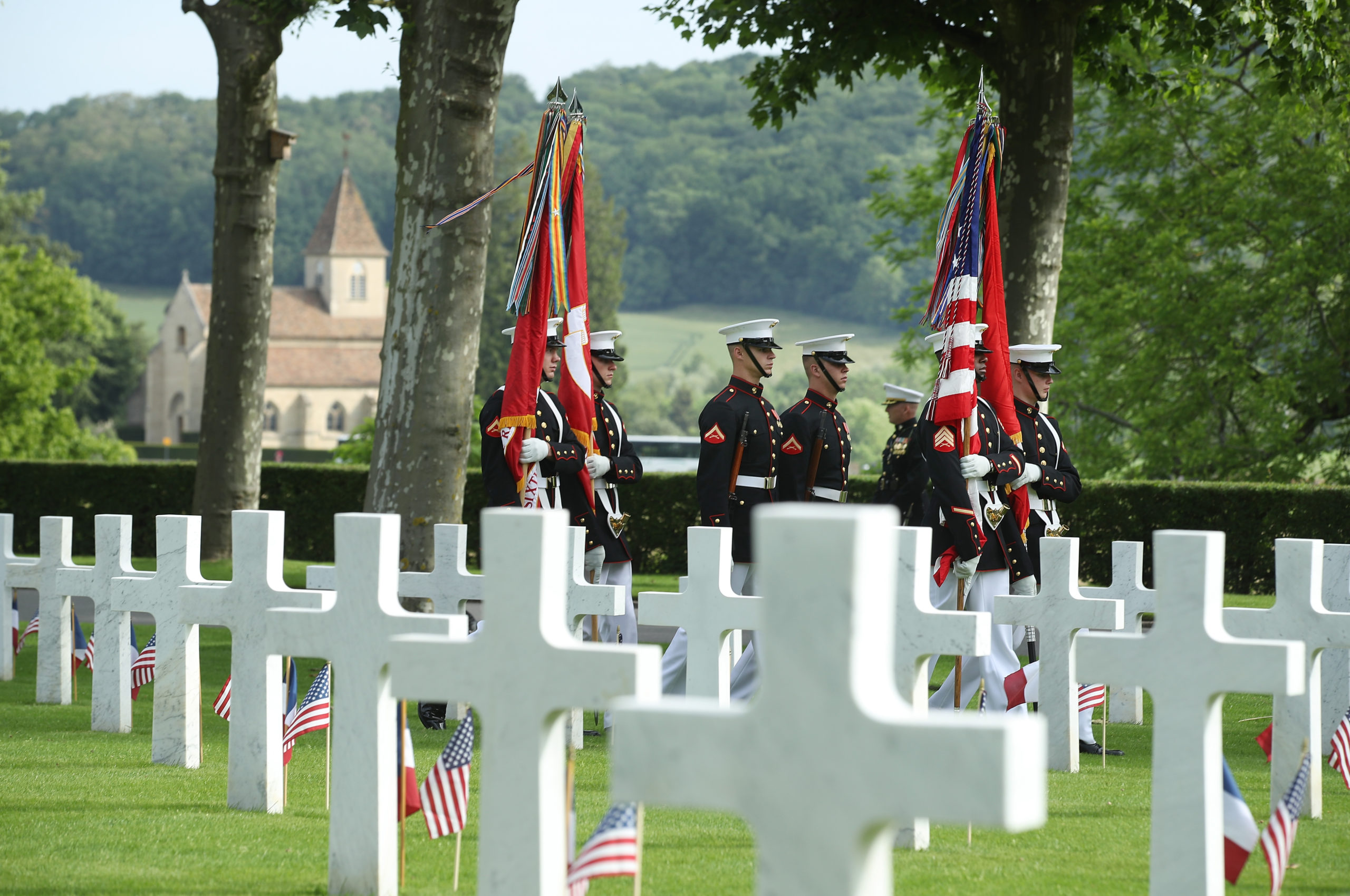 Before a 2018 ceremony marking the centennial of the battle of Belleau Wood at the Aisne-Marne American Cemetery. A village church stands in the background. (Photo by Sean Gallup/Getty Images)
Catesby Leigh

Two months before the November 2020 presidential election, the Atlantic’s editor-in-chief, Jeffrey Goldberg, wrote a story claiming that President Donald Trump had used a rainy weather forecast as a pretext for canceling a scheduled appearance at the Aisne-Marne American Cemetery and Memorial. The World War I cemetery is adjacent to Belleau Wood, where U.S. Marines defeated the Germans in an infernal 20-day struggle, and 45 miles northeast of Paris. Goldberg alleged that Trump called the men buried there “losers” and “suckers” and recoiled at the prospect of rain messing up his hairdo. Of course, umbrellas could have shielded the Trumpian coiffure. That’s not the only reason to doubt the veracity of Goldberg’s scoop, which concerned an event pegged to the centennial of the November 1918 armistice that ended the Great War.

So much for politics. All I can add is that Trump missed out on a majestic commemorative landscape. The Aisne-Marne cemetery chapel—designed by the great American interpreter of Gothic, Ralph Adams Cram (1863-1942)—ranks among the finest World War I monuments. Its insertion into the landscape of the cemetery and the surrounding countryside is breathtaking.

The son of an impecunious New Hampshire Unitarian minister, Cram never went to college. Highly intellectual, he became an Anglo-Catholic with a rather dyspeptic attitude toward the Reformation. His phenomenally productive Boston-based practice won plenty of Protestant clients even so. The roster of Cram’s landmark buildings in the United States includes the Headquarters Building at West Point; the never-completed Cathedral of St. John the Divine in Manhattan (which a distinguished Harvard medievalist, Arthur Kingsley Porter, pronounced a Gothic “tenth symphony”); the Chapel and Graduate College at Princeton; what is now called Lovett Hall at Rice University in Houston (originally the Administration Building); the Doheny Memorial Library at USC; and the stupendously cathedral-like East Liberty Presbyterian Church in Pittsburgh, funded by Richard King Mellon.

Not all of Cram’s work was Gothic. For the several buildings his office designed for Rice he developed a distinctive Romanesque style of his own. The Aisne-Marne cemetery chapel is also Romanesque, but you’ll never see another Romanesque structure quite like it. Erected where frontline trenches were dug after the fight for Belleau Wood, it is basically a monumental limestone tower rising more than 80 feet from its hillside terrace.

Hired by the American Battle Monuments Commission in 1926, Cram and his partner Chester Godfrey experienced pushback from the ABMC and the Commission of Fine Arts, the federal design review board established in 1910, against what was considered the overly Catholic tone of their early design proposals. What Cram wound up doing was eliminate the usual church choir and make the apse the sanctuary, while shrinking the transepts flanking the nave, which is square in plan, into alcoves with benches. Within the apse four wooden kneelers are situated in front of the exquisite altar. The apse is set off, like the transept-alcoves, by a simple arcuated pier embedded in the chapel’s walls, also finished in limestone. The alcove ceilings are barrel-vaulted, while the apse features the usual semidome and the lofty nave is groin-vaulted. Handsome bronze chandeliers hang from the intersection of the groin vaults and in the apse and alcoves.

Cram focused on the overall massing of his buildings. He had a sure sense of where decorative accents were needed—as well as strong convictions concerning religious symbolism—but entrusted their design to others. The chapel’s decoration is restrained but superbly focused. Having entered through a massive double door of oak with elaborate wrought-iron detail, one’s eye is immediately drawn to the altar, Gothic in style and mainly fabricated with an off-white Italian marble with gilt accents. It features a half-dozen intricately carved pinnacles and a wealth of symbolic detail. In the altar front’s central panel of a darker, richly-veined marble, a gilt pelican feeds her young in an evocation of Christ feeding the faithful.

The apse also houses tablets bearing the Mosaic commandments, as 33 Jewish soldiers are buried in the cemetery. The apse’s fine stained-glass windows offer images of the Crusader St. Louis on the left, St. Michael vanquishing evil directly above the altar, and St. Denis, patron saint of France, on the right. A window in each alcove features the shields of the nations allied against Germany in the war on one side and the insignia of the army corps and divisions that fought in Aisne-Marne region in 1918 on the other. (The Marines who fought in Belleau Wood were attached to the 2nd Division.) The names of 1,060 Americans whose remains were never recovered or could not be identified are inscribed on the chapel’s walls.

The entrance to the cemetery reflects Cram’s architectural acumen. On each side of the cemetery roadway, there is a massive pier bearing the Great Seal of the United States that is engaged with a somewhat lower flanking arch enclosing a wrought-iron gate. Though asymmetrical in themselves, these structures contribute to an overall symmetry embracing the central roadway and beautifully frame the symmetrical chapel front in the distance. They are stylistically somewhat abstract and modernistic and anticipate the emphasis on massing rather than detail on the tower’s exterior.

Not that detail is lacking there. The relief in the tympanum over the chapel door employs a traditional military type—a Crusader in armor—carved in a modernistic style, flanked by the shields of the United States and France amidst a profusion of oak branches. The capitals on the entrance’s engaged columns offer stylized vignettes of a variety of American combatants and their equipment, and each face of the chapel tower is crowned by three prominently embossed carvings of the U.S. shield and corps and division insignia. Buttresses on each side of the entrance recede with successive offsets that emphasize, rather than diminish, one’s impression of emphatic verticality, while elongated arch motifs are worked into the tower’s face below the belfry and its arcuated openings, themselves decorated with sculpted attributes of different service branches and implements of warfare.

The cemetery’s landscape—mainly laid out in the early 1920s by George Gibbs, a Kentucky native who spent a considerable portion of his career with the influential Olmsted Brothers office—is superb. The road leading to two malls in front of the chapel is lined with plane trees and rosebush beds girded by low boxwood hedges, with little conical boxwood trees planted between the hedges. The road forks, then intersects at the second mall with two gently curving, tree-lined lanes girding the cemetery’s two grave sections, which extend from the foot of the hill with the chapel and Belleau Wood. Nearly 2,300 Americans are buried here. An enclosed stairwell adjoined to the tower’s rear leads to the belfry, which offers 360 degree-views of the cemetery and the (now) beautiful landscape in which some 310,000 American soldiers and Marines played a crucial role in pushing the Germans relentlessly northward from the Marne during the summer of 1918. The stairwell is currently closed, but paths lead up the hillside in which the tower is embedded, allowing the visitor to experience much the same superb spectacle while immersed in an enchantingly informal landscape. At the top of the hill there is a relatively open forest harboring the shell of a stone hunting lodge, a remnant of the struggle for Belleau Wood; but you have to leave the Aisne-Marne cemetery to reach the Marine Corps memorial at the battle site.

Cram’s work at the Aisne-Marne cemetery, which was completed in 1932, includes two pleasingly domestic structures: a visitor building and, across the entrance road, the superintendent’s quarters, both finished in fieldstone ashlar with limestone trim. He designed another excellent monumental ensemble for the Oise-Aisne American Cemetery and Memorial, about a 20-mile drive northeast of the Aisne-Marne cemetery. Also Romanesque in style, it responds to its very different site with a completely different design involving a semicircular peristyle terminated by a chapel at one end and at the other, a museum with an elegantly incised, polychromatic wall map documenting the role played by American forces in the Aisne-Marne region. The peristyle and two buildings, with their handsomely battered (or inclined) walls, are clad in a gorgeous pink sandstone with pale-grey sandstone trim. This cemetery contains more than 6,000 graves.

There are many American monuments in the two cemeteries’ vicinity, but I would like to make brief mention of one that easily escapes the attention of American travelers. This is the American Memorial Church, located next to the mairie in Château-Thierry, the town on the Marne which marked the southern extent of the alarming German advance in late May, 1918. Designed by a French architect, Achille-Henri Chauquet, the church’s construction was funded by American Protestants—mainly members of a small denomination of presbyterian orientation with particularly deep roots in Pennsylvania, the Reformed Church in the United States. The American Memorial Church was completed in 1924 and entrusted to French Calvinists. Theodore Roosevelt’s widow donated the Bible on the communion table in memory of her son Quentin, a fighter pilot killed in action, at age 20, in July 1918. (A handsome stone fountain in the village of Chamery, situated about half a mile from the site where his Nieuport 28 crashed, serves as a memorial to Quentin.)

Cram was not impressed by the French architecture of the period between the wars—the restoration of historic landmarks excepted—and he would not have thought much of the American Memorial Church’s exterior, which has an unmonumental dinkiness about it. It consists of an entrance tower flanked by a parish hall on one side and the church itself on the other. The church’s interior comes as a surprise, however. It is very much a sacramental space, not the more functionally-oriented auditorium associated with Calvinist worship. Impressive in scale, it consists of a tall nave with no aisles and a handsome wooden ceiling supported by trusswork. Three-tiered stained-glass windows feature Christian symbols at the top with parable scenes below and, at the bottom, tondo portraits of Calvinist luminaries. A large window above the narthex celebrates the Franco-American military alliance, with Lafayette front and center.

The involvement in the memorial church project of the American Battle Monuments Commission’s consulting architect, the eminent French-born, classically-oriented designer Paul Philippe Cret, probably accounts for the sanctuary. (Cret, for the record, designed the Chamery fountain memorial, along with a number of major World War I monuments in France and elsewhere.) Even so, it would not be unreasonable to surmise that this is yet another instance of Cram’s Catholic influence, already well established before the Great War, on the design of a Protestant temple. In any event, the American Memorial Church remains a house of worship but also serves as an extraordinary testament to the ties that have bound France and America along the line.