Home/New Urbs/Trump, Populism, and the Suburbs

Trump, Populism, and the Suburbs 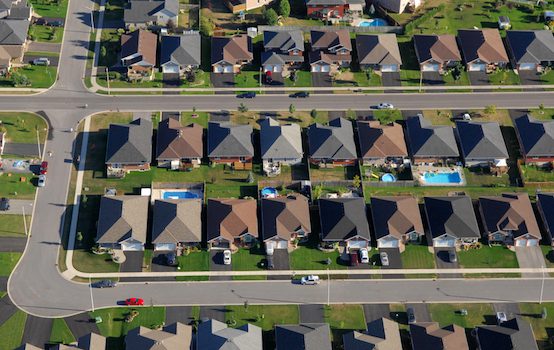 Since at least the inauguration, a central question of this presidency has been whether Trump could cease campaigning and learn to govern. Now, with less than 70 days until the general election, a contrary question is equally pressing: will Trump stop governing like a Republican and start campaigning again as a populist?

Gone from Trump 2020 are the effective—if crass—messages to truckers, miners, and bikers that carried Trump 2016 to victory. The overt appeals now go to“beautiful boaters” and “suburban housewives.” The emphasis on protecting entitlements and building infrastructure has given way to a payroll tax deferral and a capital gains tax cut.

The recent foray into housing policy induces particular whiplash. Republicans have long criticized President Obama’s “Affirmatively Furthering Fair Housing” (AFFH) policy, under which the Department of Housing and Urban Development (HUD) could require local governments receiving federal funding to analyze the demographic makeup of their communities and pursue policies to redress racial segregation. However laudable the goal, the policy was overly ponderous and essentially toothless, conditioning HUD funding to state and local governments on drafting lengthy reports, not reforming actual policy. Trump and his HUD Secretary, Ben Carson, had attempted to improve upon AFFH policy by tying federal funds to local policies that would reduce regulatory barriers and increase housing supply. Deregulation on behalf of families seeking affordable housing would seem to lie at the intersection of conservative and populist priorities. But last week they executed a campaign-season reversal.

In an op-ed for The Wall Street Journal, Trump and Carson essentially renounced their own AFFH policy and instead pledged to “protect America’s suburbs,” advancing a new policy that allows states and localities to fulfill fair housing requirements by doing anything that “rationally relates” to AFFH objectives. Whereas just months ago the federal government sought affirmatively to expand housing supply, now Trump and Carson claim such efforts offer a “path to tyranny” and a “dystopian vision of building low-income housing units next to your suburban house.” Federal incentives themselves represent a “radical social-engineering project” and an attempt “to put the federal government in charge of local decisions.”

This new argument awkwardly marries upper-class NIMBYism with the tired tropes of market fundamentalism. In Trump and Carson’s telling, our suburbs – like our nation – were “founded on liberty and independence, not government coercion, domination and control.” This is, of course, nonsense. Suburbia—from its design to its demography—is the result not of spontaneous order, but of anambitious federal policy agenda to create a durable American middle class. Meanwhile, the entire ethos of NIMBYism is predicated on using government regulation and litigation to stall investors and entrepreneurs seeking to meet market demand. “Get your regulations off my single-family zoning laws” is simply the prep-school graduate’s version of “keep your government out of my Medicare.”

Trump’s pivot is unfortunate not only for its incoherence, but because it represents yet another missed opportunity for a Republican Party struggling to escape a demographic trap of its own making. Many working families would benefit from a greater supply of affordable, suburban housing. But instead of adopting a policy with appeal to a pan-ethnic, working-class coalition, the White House is now pursuing a revanchist campaign for the suburban vote, embracing a do-nothing housing policy that benefits the upper-middle-class denizens of aggressively zoned, blue districts.

This has been a signature dynamic of the Trump presidency, which seemed poised to reshuffle the American political deck but has instead contented itself with replaying the Republican Party’s losing hand. If the re-election campaign has a clear message, it’s to expect more of the same.