Once a Vibrant Place, Harvard Square Is Dying

Before chain stores and banks took over, the busy Cambridge district was full of independent businesses. 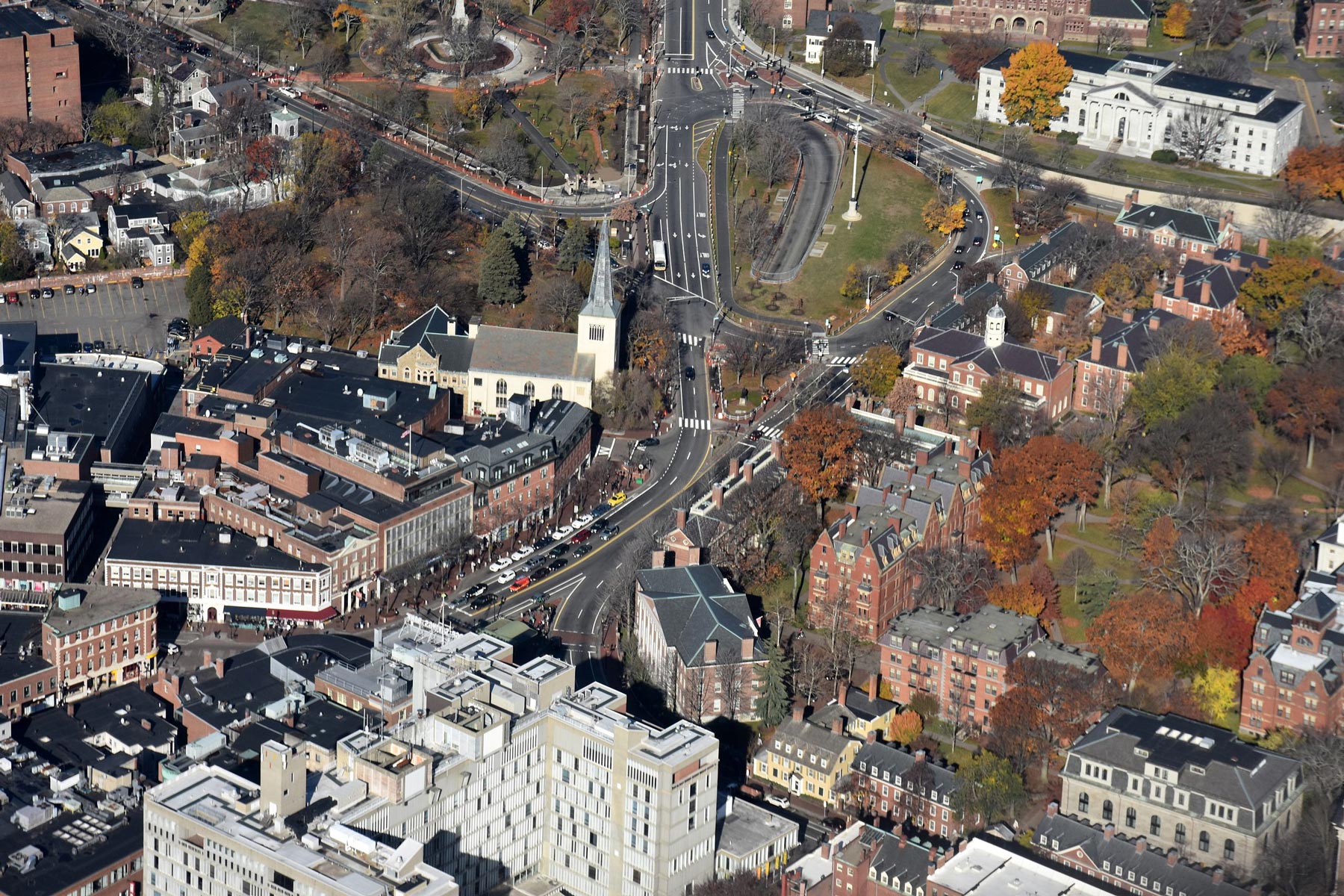 CAMBRIDGE, Mass.—Harvard Square has a problem: it’s rapidly becoming an outdoor shopping mall thanks to high property values. Rents are so high that only high-end businesses or chains can afford the rent. Local hipsters despair of its authenticity. Many of the bookstores which once called the Square home have closed or had to move due to rising rents, and independent cafes and clothing stores are following suit. In the summer of 2018, Ivy-style mainstay J.Press closed its Harvard Square store, which had been around for 86 years. The space remains empty.

Say you’ve never been to the Square before. What do you see today? While you can drive by car to Harvard Square, that’s for serious masochists only. Taking one of the many buses is a slightly better option (currently made worse because ridesharing companies like Uber and Lyft prefer to use bus stops to pick up and drop of passengers, needlessly delaying an overcrowded bus full of people). No, most likely you will be arriving via the Massachusetts Bay Transportation Authority’s (MBTA) Red Line trains. Assuming they work.

The Harvard Square Station is a little strange. It used to be the terminus of the Red Line until a major expansion project in the 70s and 80s extended it out to Alewife. As a result of being the terminus, over a dozen trolley lines, long since converted to run buses, converge on the station. It’s one of the busiest in the MBTA and it means that thousands of commuters pass through the Square every day, in addition to the people who live, work, and study there.

As a result of being rebuilt and having to accommodate so many bus routes with different origins and destinations, it’s a bit maze like. Some buses stop and pick up in one part, some are flipped and some are on the surface and only theoretically drop off or pick up at the station. But once you get there, and find your way into the street, you will be standing in the Square itself—which in typical Boston fashion, does not resemble a square at all.

It’s technically the intersection of John F. Kennedy Street and Massachusetts Avenue. Right next to the entrance of the station, there’s a building that was once known as the home of a burger joint called The Tasty that existed for about 80 years until 1997. It’s now a Starbucks and a CVS, along with a space that has been a variety of trendy places—frozen yogurt, bubble tea, and now juices. Across the street is a building that houses the world’s only Curious George Store while lettering on a window above announces the law offices of Dewey, Cheetham and Howe, in reality the former production office of NPR’s Car Talk. On the other side of the triangle is a space that used to be a convenience store/newsstand and is now a pizzeria and ice cream joint, the Harvard Coop—really a Barnes and Noble in disguise—and a Bank of America in a fortress-like five-story building.

The Bank of America manages by far to be the most anti-urban building in the entire neighborhood, which is impressive considering it once competed with modernist Josip Lluis Sert’s Harvard University campus center. The windows are barred and a metal overhang keeps rain off ATM customers—but adds an ominous shadow to the sidewalk by being too low and flat. The deliberately intimidating appearance is a result, I am told, of anti-Vietnam War protests in the late 1960s. The bank’s owners feared they would spiral out of control into full on Communist revolution, and nobody since has decided it’s worth the money restoring the facade.

Walk down Brattle Street, there’s a stunning contrast between the right and left sides. The right side has a number of businesses, including The Gap and a Moleskine store, while the left side is now dead. There used to be a bakery called Sweet that specialized in cookies and cupcakes, a tea shop (that I think was part of a chain owned by Starbucks) and Urban Outfitters. Now there’s a big hole where a developer is building a literal shopping mall, The Abbott. The construction site, however, is at least an indication of things happening, instead of the vacant storefronts deadening the street Cambridge denizens lived with for months.

Brattle Street opens onto Brattle Square while curving around and away towards Watertown. Brattle Square is basically a glorified intersection for cars, with pedestrians and cyclists an afterthought. The architecture reinforces the urbanism, as none of the buildings fronting Brattle Square appear to want to have anything to do with it. The building has a weird split-level which is mostly off-putting and any effort to be desirable is rendered useless by the bank branch with its window shades always down. Across Mount Auburn Street there’s an office building with no retail, another bank and a long-vacant space. Then across the square there’s One Brattle Square, a squat office building with a nice plaza in front of it, but despite taking up 180 feet of streetfront, only has two ground floor tenants, one of which is a bank.

Back to Brattle Square, the final building blighting this potential bright spot is the Harvard Square Hotel, which took the unusual step of using its 150 or so feet of street frontage for its parking garage. Head, meet desk.

The last problem area is Church Street, which curves around north from Brattle to Mass Ave. Another bank is right on the Brattle Street corner. This isn’t as bad as others, since it’s in a building that’s old enough that the architecture is somewhat interesting. They also put a display involving falling water and light in one of the windows, which helps. There are some more overly huge vacant retail spaces, including a former movie theater that closed in 2012, but the biggest hole is a parking lot, which would be perfect for food trucks or a farmer’s market. Things are much better down Massachusetts Avenue, past the station.

Long-term vacancy seems more common even than being replaced by some luxury retailer or chain fast-casual restaurant. Every closure brings with it a usual array of tweets and letters to the editor and articles about how the Square is changing for the worse. This being Cambridge, the writers frequently blather on about capitalism, globalization, and neoliberalism, usually in a way to indicate that those words don’t refer to concepts but thought-terminating cliches. After all, the closed businesses and local landlords were just as motivated by profit as the new ones. But leaving aside the ongoing abuse of the English language, local and long-time businesses are still being replaced with chains or long-term vacancies. Some of the places that have closed and been replaced with banks or empty storefronts were just previous layers of shopping mall transformation, such as the Urban Outfitters that used to be on Brattle Street.

Of course, it’s not like one reason for the long-term vacancy is that it takes forever to get anything approved in Cambridge, build new buildings, or even renovate existing ones. And it’s also not like these policies keep property values high and favor chains with the cash to wait for approvals when mom-and-pop already invested their life savings to get this far. Existing merchants could also try meeting their customers halfway and being open at night instead of while most people are at work.

Actually, it sometimes seems as if Harvard Square is progressing through the shopping mall stage and on to a place’s terminal stage: the bank event horizon. Look, there’s nothing wrong with bank branches, especially in an era where we do too much alone or online. A little human interaction is great. But put too many banks on a street, or in too big of a storefront, and the street dies. They just don’t generate enough foot traffic—at least Starbucks still has people going in and out. A bank should take up no more than about 30 feet of street space. Any more than that and they need to come up with an alternative use for some of that window space.

Still, Harvard Square is better than some spots, like Assembly Square in Somerville, which is all boutiques and fake nostalgia. Assembly does have the excuse of being all brand new, so it hasn’t had time to get cheap, decline, get “rediscovered” and gentrify.

One day there will be another recession, property values will get wiped, and more enterprising or less risk-averse people will start all over again—like the myth of some bourgeois dying-and-rising harvest god. Until then, Harvard Square will suffer more decline, instead of Cambridge residents enjoying what should be one of America’s most important urban precincts.

Matthew Robare is a freelance journalist living in Boston.