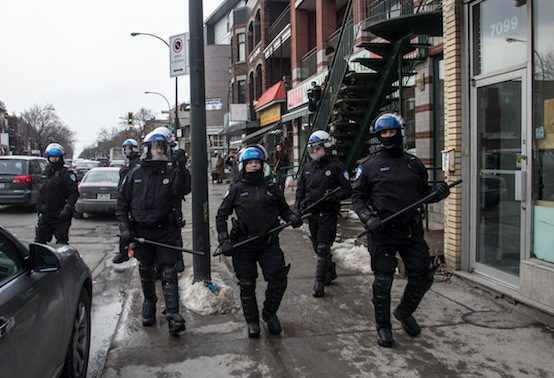 Darrin Manning’s unprovoked “stop and frisk” encounter with the Philadelphia police left him hospitalized with a ruptured testicle. Neykeyia Parker was violently dragged out of her car and aggressively arrested in front of her young child for “trespassing” at her own apartment complex in Houston. A Georgia toddler was burned when police threw a flash grenade into his playpen during a raid, and the manager of a Chicago tanning salon was confronted by a raiding police officer bellowing that he would kill her and her family, captured on the salon’s surveillance. An elderly man in Ohio was left in need of facial reconstructive surgery after police entered his home without a warrant to sort out a dispute about a trailer.

These stories are a small selection of recent police brutality reports, as police misconduct has become a fixture of the news cycle.

But the plural of anecdote is not data, and the media is inevitably drawn toward tales of conflict. Despite the increasing frequency with which we hear of misbehaving cops, many Americans maintain a default respect for the man in uniform. As an NYPD assistant chief put it, “We don’t want a few bad apples or a few rogue cops damaging” the police’s good name.

This is an attractive proposal, certainly, but unfortunately it doesn’t hold up to scrutiny. Here are seven reasons why police misconduct is a systemic problem, not “a few bad apples”:

This is particularly obvious when it comes to dealing with family pets. “Police kill family dog” is practically its own subgenre of police brutality reports, and most of these cases—like the story of the Minnesota children who were made to sit, handcuffed, next to their dead and bleeding pet—are all too preventable. Some police departments have begun to train their officers to deal more appropriately with pets, but Thomas Aveni of the Police Policy Studies Council, a police consulting firm, says it’s still extremely rare. In the absence of this training, police are less likely to view violence as a last resort.

“Excess is in the eyes of the beholder,” explains William Terrill, a former police officer and professor of criminal justice at Michigan State. “To one officer ‘objectively reasonable’ means that if you don’t give me your license, I get to use soft hands, and in another town the same resistance means I can pull you through the car window, [or] I can tase you.” The special deference police are widely given in American culture feeds this inconsistency of standards, producing something of a legal Wild West. While national legislation would likely only complicate matters further, local or state-wide ballot propositions should allow the public—not the police—to define reasonable use of force.

3. Consequences for misconduct are minimal.

In central New Jersey, for instance, 99 percent of police brutality complaints are never investigated. Nor can that be explained away as stereotypical New Jersey corruption. Only one out of every three accused cops are convicted nationwide, while the conviction rate for civilians is literally double that. In Chicago, the numbers are even more skewed: There were 10,000 abuse complaints filed against the Chicago PD between 2002 and 2004, and just 19 of them ”resulted in meaningful disciplinary action.” On a national level, upwards of 95 percent of police misconduct cases referred for federal prosecution are declined by prosecutors because, as reported in USA Today, juries “are conditioned to believe cops, and victims’ credibility is often challenged.” Failure to remedy this police/civilian double standard cultivates an abuse-friendly legal environment.

4. Settlements are shifted to taxpayers.

Those officers who are found guilty of brutality typically find the settlement to their victims paid from city coffers. Research from Human Rights Watch reveals that in some places, taxpayers “are paying three times for officers who repeatedly commit abuses: once to cover their salaries while they commit abuses; next to pay settlements or civil jury awards against officers; and a third time through payments into police ‘defense’ funds provided by the cities.” In larger cities, these settlements easily cost the public tens of millions of dollars annually while removing a substantial incentive against police misconduct.

“Simply put,” says University of Florida law professor Katheryn K. Russell, “the public face of a police brutality victim is a young man who is Black or Latino.” In this case, research suggests perception matches reality. To give a particularly striking example, one Florida city’s “stop and frisk” policy has been explicitly aimed at all black men. Since 2008, this has led to 99,980 stops which did not produce an arrest in a city with a population of just 110,000. One man alone was stopped 258 times at his job in four years, and arrested for trespassing while working on 62 occasions. Failure to address this issue communicates to police that minorities are a safe target for abuse.

During President Obama’s gun control push, he argued that “weapons of war have no place on our streets;” but as Radley Balko has amply documented in his 2013 book, Rise of the Warrior Cop, local police are often equipped with weapons powerful enough to conquer a small country. Police use of highly armed SWAT teams has risen by 1,500 percent in the last two decades, and many police departments have cultivated an “us vs. them” mentality toward the public they ostensibly serve. Although possession of these weapons does not cause misconduct, as the old saying goes, when you have a hammer everything begins to look like a nail.

Here’s the real clincher. A Department of Justice study revealed that a whopping 84 percent of police officers report that they’ve seen colleagues use excessive force on civilians, and 61 percent admit they don’t always report “even serious criminal violations that involve abuse of authority by fellow officers.”

This self-reporting moves us well beyond anecdote into the realm of data: Police brutality is a pervasive problem, exacerbated by systemic failures to curb it. That’s not to say that every officer is ill-intentioned or abusive, but it is to suggest that the common assumption that police are generally using their authority in a trustworthy manner merits serious reconsideration. As John Adams wrote to Jefferson, “Power always thinks it has a great soul,” and it cannot be trusted if left unchecked.

The good news is that the first step toward preventing police brutality is well-documented and fairly simple: Keep police constantly on camera. A 2012 study in Rialto, Calif. found that when officers were required to wear cameras recording all their interactions with citizens, “public complaints against officers plunged 88% compared with the previous 12 months. Officers’ use of force fell by 60%.” The simple knowledge that they were being watched dramatically altered police behavior.

Coupled with additional reforms, like making officers pay their own settlements and providing better training for dealing with pets, camera use could produce a significant decrease in police misconduct. It is not unrealistic to think that police brutality reports could be made far more unusual—but only once we acknowledge that it’s not just a few bad apples.

Bonnie Kristian is a writer who lives in the Twin Cities. She is a communications consultant for Young Americans for Liberty and a graduate student at Bethel Seminary. Find her at bonniekristian.com and @bonniekristian.