Embarrassing the Government Is the Ultimate Crime

Why whistleblowers are treated worse than traitors 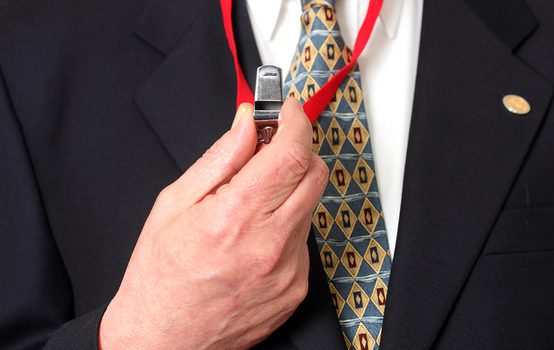 President Barack Obama was a master at using the tools available through the Justice Department to silence whistleblowers and otherwise put a lid on developments that might embarrass his administration. He initiated numerous claims of the state-secrets privilege to stop lawsuits against the government, while also prosecuting leakers with a zeal previously unseen.

So perhaps it is not completely surprising to learn of a truly bizarre tale that surfaced last week regarding an Obama-era closed-door trial and imprisonment of a Federal Bureau of Investigation (FBI) translator, Daniela Greene, a German linguist who reportedly traveled secretly from Detroit to Syria to wed a leading ISIS terrorist whom she had been investigating but had never met.

The odd romance could have come straight out of a work of fiction. In fact, it has an uncanny resemblance to Ian Fleming’s From Russia With Love, where the Russian double agent Tatiana Romanova claimed that she had fallen in love with James Bond as a result of studying his KGB file. And just like in the Fleming novel, our FBI heroine experienced guilt and remorse before finally deciding to do the right thing, though in her case the right thing meant returning to her old allegiance rather than embracing a new one.

One interesting aspect of the trial and imprisonment of Greene is how it was all kept secret. Another notable fact is that she was convicted on a lesser charge that minimized her jail time, with the judge further being induced to give her the lightest possible sentence. This mitigation was reportedly due to her cooperation, but it might also be because the case was such an embarrassment, demonstrating that there are huge holes in the bureau’s security vetting and personnel-management procedures.

Admittedly there is much that one does not know about the Greene saga, as considerable portions of the court records were sealed and remain unobtainable. But there are certain bits that can almost certainly be surmised from similar cases involving defections. Thirty-eight-year-old Daniela Greene was born in Czechoslovakia and raised in Germany. She married an American servicemember, from whom she has subsequently separated, and moved to the United States. She eventually obtained a master’s degree in history from Clemson University and was eventually hired in 2011 by the FBI as a German-language translator. As part of the hiring process, she was subjected to what was believed to be a thorough background check that included a polygraph. She was granted a top-secret clearance to provide translation support in highly sensitive terrorism-related investigations.

In January 2014 Greene was working in the bureau’s Detroit office, focusing on a German-born rapper who had converted to Islam and become a jihadist affiliated with ISIS. He was well-known for his propaganda and recruiting videos aimed at a German-speaking audience. His actual name was Denis Cuspert but his rapper name was Deso Dogg. Both in Syria and online he went by various other names, including Abou Mamadou and Denis Mamadou Cuspert. He also used an Arabic name, Abu Talha al-Almani (“Father of” Talha “the German”). In one video he is seen holding a newly severed human head while in another he is kicking a corpse on a battlefield near Homs in Syria.

Cuspert fled Germany in 2012, shortly after having posted a fake video on Facebook that allegedly showed American soldiers raping a Muslim woman. The video reportedly motivated a man to attack U.S. servicemen in Frankfurt, killing two of them. After stops in Egypt and Libya, Cuspert wound up in Syria where he was put to work in the ISIS propaganda department.

Greene’s professional interest in Cuspert apparently developed into a different type of obsession. She identified several phone and Skype accounts he used but also found a third account that she kept to herself, not reporting the information to her superiors. Shortly thereafter, she almost certainly made initial contact with Cuspert surreptitiously through that account. In June 2014, she filed a foreign-travel request claiming that she intended to visit her family in Munich, which was granted, but instead flew to Istanbul and made her way to the border, where she contacted Cuspert and he arranged for her onward travel into Syria. Once in Syria she immediately married Cuspert, even though she was still married to her American husband, but within two weeks she began to have serious concerns about what she had done.

On August 1, five weeks after Greene’s departure from the U.S., the FBI issued a secret arrest warrant for her. Increasingly distraught over her situation, Greene somehow escaped Syria and made her way back to the United States, where she was arrested on August 8. She was allegedly fully cooperative, her case was sealed, and a series of closed hearings followed through the end of the year, when she pleaded guilty and was sentenced to two years in prison dating from her arrest in August. She was released in August 2016 and now lives in Syracuse.

Greene’s testimony regarding Cuspert apparently led to his being identified as a “Specially Designated Global Terrorist” in February 2015. She also reportedly provided other information that was “significant, long-running and substantial.” Greene claimed during her interrogations in late 2014 that she had revealed little to her husband and his colleagues during her short time in Syria, an assertion the FBI may or may not have believed to be true. Shortly after Greene’s sentencing, the German media picked up on bits of the story, alleging that Cuspert had actually been duped into marrying an FBI “spy,” a spin that likely originated with the U.S. government to create suspicion regarding Cuspert among his colleagues in ISIS.

The handling of the Greene case is only partly discernible because so many of the relevant court documents are still sealed, but it does raise some serious questions beyond the procedures used to check out new employees. Greene might have been able to provide substantial information on Cuspert personally and on her surroundings at an ISIS stronghold in Syria. But she spoke no Arabic and it is safe to assume that she would not have been trusted, which would mean close monitoring of her activities was likely. And she admitted providing information to Cuspert on the investigation into him, so it is possible that she also was forthcoming on other FBI cases that she knew about.

FBI translators work closely with special agents on cases, so it is not as if they spend all day translating documents without any understanding of why texts are relevant. Greene might have had considerable information on terrorism investigations underway in Germany. She would certainly have been pressed by ISIS to establish her bona fides and she no doubt would have been cooperative, just as she was when she returned home to the United States and opted to help her FBI interrogators. And as ISIS would have been careful not to let her know too much while she was still being assessed, one has to be somewhat skeptical about the reliability or importance of the information that she proved willing to provide to the U.S. government.

Greene was plausibly a traitor. She provided classified information to an enemy of the United States (as defined by the 2016 Congressional Authorization to Use Military Force). She was tried in secret and received a slap-on-the-wrist sentence. Other American citizens or residents convicted of providing material assistance to terrorists or desiring to join ISIS and al-Qaeda have received much stiffer sentences. Terrorism or national-security cases produce an 87 percent conviction rate and the sentences have averaged 14 years, even when the accused did absolutely nothing beyond talking or sending money back home in one of the frequent FBI “sting” operations (referred to by some as entrapment). So there is a substantial difference in terms of how justice was served in the Greene case compared to what was normal for others who “provide material assistance to terrorism.”

Two other national-security cases involving CIA-officer whistleblowers sent to prison also illustrate how justice is not always blind. On January 23, 2012, John Kiriakou, a whistleblower who had exposed the secret and illegal Agency waterboarding program to Senate investigators, was charged with disclosing classified information to journalists, including the name of an undercover CIA officer who had already been exposed in the media. The government made no effort to demonstrate that any genuine national-security interests had actually been damaged by Kiriakou’s actions. To avoid a protracted trial held in secret, in October 2012, Kiriakou plea-bargained guilty to one count of passing classified information to the media, thereby violating the Intelligence Identities Protection Act. In January 2013, he was sentenced to 30 months in prison and is now free.

Then there is Jeffrey Sterling, who is currently serving a three-and-a-half-year prison term for allegedly leaking information to New York Times journalist James Risen. Sterling first came to the media’s attention when in 2003 he blew the whistle on a botched CIA operation called Operation Merlin, telling the Senate Intelligence Committee staff that the CIA had mistakenly sent nuclear secrets to Iran. So it was perhaps inevitable that in 2006, when James Risen published a book that inter alia discussed the botched Operation Merlin, the Department of Justice focused on Sterling as the suspected source. In court the federal prosecutors relied almost entirely on Risen’s phone and email logs, which reportedly demonstrated that the two men had been in contact up until 2005. But the prosecutors did not provide the content of those communications, even though the FBI was listening in on some of them. Risen has claimed that he had multiple sources on Operation Merlin, and Sterling has always denied being involved. No evidence was ever produced in court demonstrating that any classified information ever passed between them.

Jeffrey Sterling could not even testify in the trial on his own behalf because he would have had to discuss Operation Merlin, which was and is still classified, meaning he could not reveal any details about it even if they are already known through the Risen book. Indeed, some of the information in Risen’s book relating to Merlin could not have been known by Sterling as he was no longer associated with the operation after mid-2000, a detail that could also not be presented as it too was considered classified. The jury convicted Sterling based on “suspicion,” a verdict that defense witness Col. Pat Lang, former head of the Defense Intelligence Agency’s clandestine program, described as a “travesty.”

After conviction Sterling was sent to prison in Colorado—900 miles from his family’s home in St. Louis. According to his wife Holly, legal fees have wiped out the couple’s finances, leading some to believe that the government deliberately set out to make an example of Sterling. John Kiriakou observed that “The point wasn’t just to imprison Jeffrey. It was to ruin him. Utterly ruin him. The point was to demonize him. And frighten any other would-be whistleblowers.”

So much for equal justice in the United States. Joining a terrorist group to marry one of its leaders while sharing classified information merits little in the way of either publicity or consequences because it would embarrass the “system.”  But blowing the whistle on wrongdoing causes a ton of bricks to descend—even when the government fails to demonstrate that any actual damage has been done. It is all a matter of perception. The contrite translator cooperates and gets a pass while those who expose government criminality can expect nothing but the worst, even if an essentially phony case has to be contrived to dole out the punishment.