BlackRock will be creating a roadmap for reconstruction for Ukraine. 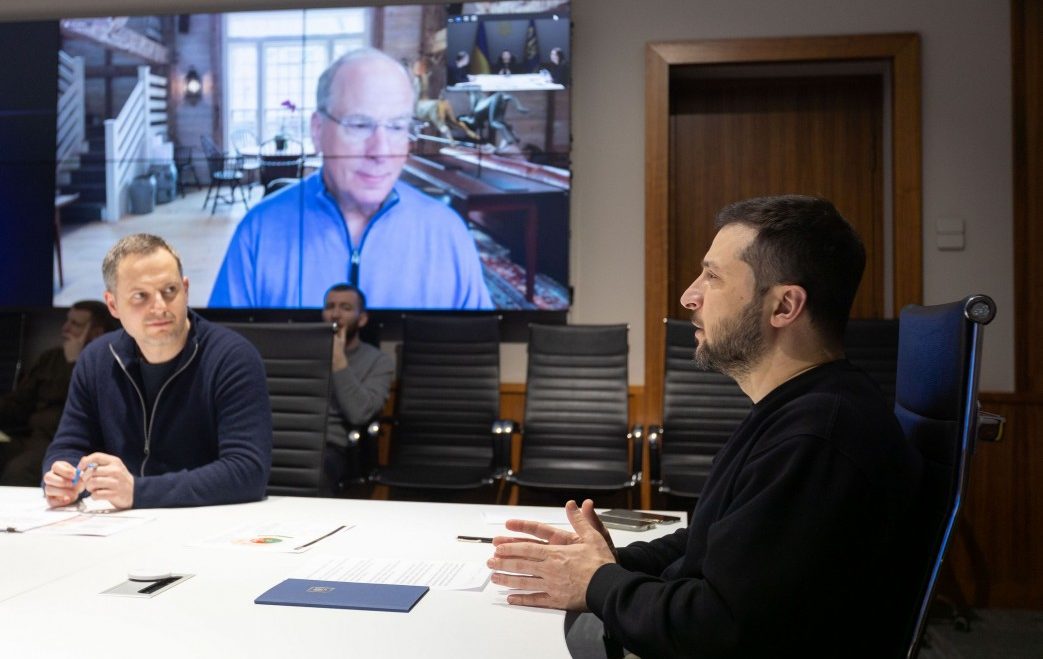 Ukraine has a new Western backer. It’s not a nation-state, or a military contractor. It’s the financial firm BlackRock.

A readout of the meeting on the Ukrainian president’s website boasted BlackRock’s involvement, calling the firm “one of the world's leading investment managers” and noted that it “manages client assets worth about 8 trillion dollars.”

“Zelenskyy and Larry Fink agreed to focus in the near term on coordinating the efforts of all potential investors and participants in the reconstruction of our country, channelling investment into the most relevant and impactful sectors of the Ukrainian economy,” the readout claimed.

The release also stated that some BlackRock executives would visit Ukraine in 2023 to fulfill their advisorial duties. “In accordance with the preliminary agreements struck earlier this year between the Head of State and Larry Fink, the BlackRock team has been working for several months on a project to advise the Ukrainian government on how to structure the country’s reconstruction funds,” according to the Ukrainian government.

One such preliminary agreement struck between BlackRock and Ukraine was a memorandum of understanding signed by the Ukrainian Ministry of Economy and BlackRock Financial Markets Advisory in Washington, D.C., on November 10, 2022. The memo said that BlackRock FMA would advise the Ukrainian government, specifically the Ministry of Economy, on an investment roadmap for the reconstruction of Ukraine’s economy.

BlackRock’s press release about the November 10 memo is chock full of hollow corporate speak. According to the release, BlackRock will work with Ukraine “on establishing a roadmap for the investment framework’s implementation, including identifying design choices for the envisioned setup, structure, mandate and governance."

A previous meeting in September between Zelensky and Fink, apparently arranged by Andrew Forrest of the Fortescue Metals Group, laid the groundwork for the Ukrainian government’s growing cooperation with BlackRock. The Ukrainian President and the BlackRock CEO reportedly discussed how to attract public and private investment to Ukraine.

Back in the states, the NYC-based investment firm has been making major headlines. A report from the Wall Street Journal over the summer claimed BlackRock was one of several major investment firms causing distortion in the housing market. The report laid out how BlackRock, and firms like it, are using their massive amounts of capital to buy up single-family houses, jacking up prices in the process.

There are two immediate economic effects of the aforementioned price increases. First, higher housing costs benefit the properties already owned by BlackRock, especially in areas where the firm has invested heavily. The second effect is the artificially high prices crowd out working families, leaving only the wealthy or investment firms with massive amounts of capital at their disposal as the only players left in the market. In Houston, for example, the billionaire Fink reportedly accounts for one-quarter of recent home purchases. He’s simply buying up entire neighborhoods and using them as rentals. BlackRock is helping create a permanent renters class, though it’s long been understood that homeownership is one of the key elements to building wealth and maintaining the American middle class.

It is all rather infuriating: one can almost guarantee BlackRock is getting paid handsomely by the Ukrainian government for advising on this reconstruction roadmap. And where is the Ukrainian government currently getting its funding, given its economy is in shambles and war is an expensive undertaking? The United States government, of course. By the end of the calendar year, the U.S. will have provided $13 billion in direct budgetary support for Ukraine’s government to avoid shortfalls and outright bankruptcy, and President Joe Biden has promised to support Ukraine for “as long as it takes.”

So, BlackRock gets paid by U.S. taxpayers via the Ukrainian government to devise a plan that ensures the success of their future investments in Ukraine, made from money gained by making American housing unaffordable. With a deal like that for our financial and political elite, why would they ever want peace?