Home/Articles/Culture/Seance in an Abandoned Mall
Culture

Seance in an Abandoned Mall

The dead mall explorers on YouTube are today's version of the Renaissance ruin gazers. 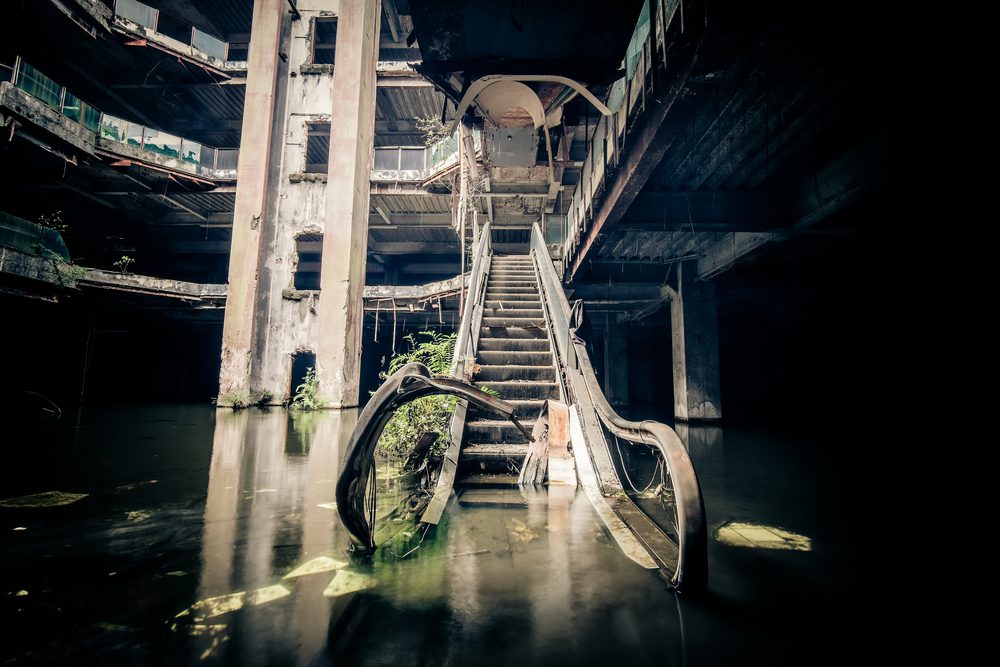 Binge-watching YouTube videos is escapist, of course. But that doesn’t mean it’s boring. My own tastes run from the anodyne (YouTubers reacting to stand up comedy) to the esoteric (KrainaGrzybowTV), but on any given evening I typically land somewhere between the two. On a spectrum that wide, “in between” means paranormal ghost hunting videos on channels like The Paranormal Files, Mindseed TV, and Kelsi Davies. As superficially different as each one is from the others, ranging over vast tracts of American styles and modes of expression, they’re all fundamentally the same. People, sometimes using dubious technology such as “spirit boxes,” descend on properties with spooky histories at night and allow themselves to get really, really creeped out.

Whether you believe in the paranormal or not, and whether these YouTubers are actually gathering rock-solid evidence of specters, is beside the point. What they’re doing is using the internet to create and distribute a kind of folk-entertainment that explores the numinous aura of how the past itself is re-experienced. That’s why location is so important, whether it’s a house where a murder occurred, the tunnels under Los Angeles where the Manson Family hid out, or aboard the Queen Mary (all actual locations explored on the channels I mentioned). A small group of people, always more than two and never more than five, the perfect cast size, then proceed to scare themselves silly. Every creak, every bump, feels like the past groaning out its unresolved sorrow.

The great strength of ghost hunting videos is the ambience they create. If sound tracks were composed for them, they’d be made by Brian Eno or The Dead Texan. It’s the sound of music that’s already decayed into a gentle equilibrium with silence. Music that gestures with such subtlety that its movements seem counterintuitively exaggerated. That’s the mood of these ghost hunting videos. And it’s something they share with a similar YouTube genre, which might not at superficial glance seem related: dead and dying mall videos. My personal favorite of these channels is The Proper People, who explore all sorts of buildings. The setup is exactly the same as ghost hunting videos, save the necessity for darkness. A small group enters into and explores the vaguely menacing innards of a physical locus for past events. And while whatever took place at the Northbridge Mall in Wisconsin might not be as evil as a Manson locale, they share the same uncanny sense of a place where the past has accumulated and then come to reside, half forgotten and half remembered, waiting for a seance or exploration to come alive again. And perhaps even more than the ghosts on the Queen Mary or the minimalist ambulations of Brian Eno, dead mall videos give us the chance to project our own nostalgic desires for communion with the past onto a decaying surface. Dead malls are our new haunted houses.

And make no mistake, malls are dying, at least in America. Despite the anecdotal story about a new luxury mall opening up or mall space being repurposed to appeal to an Instagram crowd, malls have been experiencing a gradual but certain decline. Over 8,000 malls closed last year in America, and according to a 2017 report by Credit Suisse, over a quarter of all American malls will have closed by 2022. The reason for the closures is deceptively simple: people aren’t shopping at malls anymore. The real estate company Cushman Wakefield tracked a 50 percent decline in mall visits between 2010 and 2013 alone. People don’t shop at malls and so stores are forced to close. If too many stores close inside a mall, the mall fails. Instead, people turn to big box stores, smaller boutiques, and especially online shopping. It isn’t for nothing that exploring dead malls has corresponded with the ascent of the internet. What makes dead mall videos even more relevant to cultural nostalgia than ghost hunting videos is that the explorations themselves are mediated through the very instrument that killed their settings. And so while these videos might not be as conventionally supernatural as the exploration of a haunted house, their eeriness is more strongly pronounced. We feel ourselves like ghosts haunting the property, drifting through a once familiar space that has become totally uncanny.

America, despite being young, is full of ruins. Our history is rife with boomtowns, abandoned infrastructure, and utopian projects that followed into inevitable embarrassment. And while there’s a recognized history of ruin-gazing in Europe, in America it’s usually seen as trespassing. It shouldn’t be. American YouTubers are the Renaissance ruin-gazers of our time, collecting fragments of a culture that is no longer with us and offering it up for our contemplation. Denis Diderot wrote, “We fix our gaze on the remains of a triumphal arch, a portico, a pyramid, a temple, a palace, and we plunge into meditation. We anticipate the ravages of time, and our imagination scatters over the very buildings in which we live. All at once, solitude and silence reign around us. We alone remain, of an entire nation that no longer exists; and this is the first line of the poetics of ruin.” According to Andrew Hui in The Poetics of Ruins in Renaissance Literature, “To be a poet in the Renaissance, then, was to think about ruins.” Perhaps channeling Diderot, the dead mall YouTubers give us the opportunity to scatter our imagination over our own contemporary ruins. And while it’s true that the poets of the Renaissance emphasized the deep time that separated them from the Roman empire and its magnificent temples and palaces, our recent past feels similarly difficult to recover. Perhaps even more so for having just slipped through our fingers.

Wilhelm Jensen’s early 20th-century novel Gradiva, which was something of an inspiration to Freud, said of Pompeii and its ruins, “What had formerly been the city of Pompeii assumed an entirely changed appearance, but not a living one; it now appeared rather to be becoming completely petrified in dead immobility. Yet out of it stirred a feeling that death was beginning to talk.” It’s this desire to allow death to begin “to talk” that ghost hunting videos and dead mall explorations share. In one, death is literal. In another, the death is architectural and cultural. But both, like Petrarch following the footprints of his beloved Laura, seek out meaning in the absent impression that once contained life.

I would argue, however, that what the dead mall explorers seek is more elusive. The fever dream of 20th-century consumerism was never meant to be a stable monument. As the architect Rem Koolhaas writes in his essay “Junkspace,” “Because it cannot be grasped, Junkspace cannot be remembered. It is flamboyant yet unmemorable, like a screen saver; its refusal to freeze ensures instant amnesia.” That might have been the intention of the Junkspace of the large suburban shopping mall, that the only perpetual things are our moment-to-moment desires, but that isn’t quite how it worked out. Because there was always the physical space itself, climate-controlled and windowless as it was, which was left behind like the fossilized remains of an extinct species. After all of our fantasies were digitized and uploaded, these giant husks of buildings were left behind to be explored and contemplated. Waiting for seances to re-acquaint us with the ghosts of our old desires.