Everything Is for Sale in George Floyd Square

The spirit of 2020 has been commoditized. 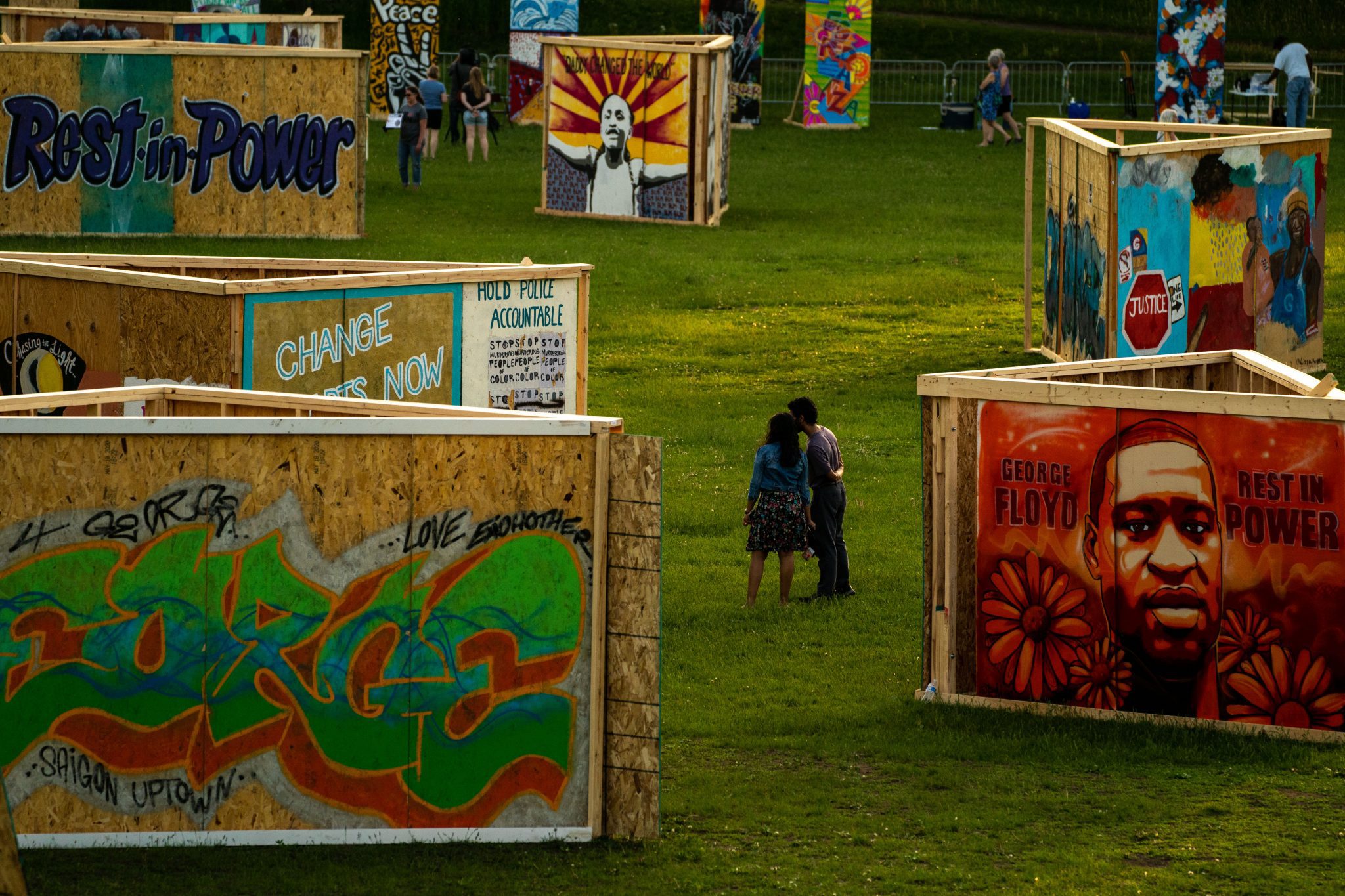 MINNEAPOLIS, Minnesota — Let’s rewind to last summer. The Twin Cities are basically shut down. The pandemic is nowhere near over, at least not according to the Minnesota state government. The name George Floyd is on everyone’s lips. Riots are commonplace. Calls to dismantle the Minneapolis Police Department are popular. Most commercial districts are boarded up. It feels like the turmoil will never end.

And it never will end, or so I learn as I walk through George Floyd Square and down an outdoor exhibition organized by the local group Memorialize the Movement. The exhibit features about 200 plywood boards ripped from buildings trashed during the riots, most emblazoned with George Floyd’s face and racial justice slogans. It promises to transport me “back to the summer of 2020, during the peak of the Minneapolis uprising.”

“Our intent is to make permanent the ephemeral,” says Leesa Kelly, the exhibition’s impresario. “To display and present the artifacts of this contemporary civil rights movement in the rightful places alongside the major historical moments of generations passed.”

Kelly, who also runs a self-care blog, began picking up the boards last year when businesses started removing them. Along with her boyfriend and an army of volunteers, she has amassed more than 800 panels featuring racially inflected murals, poems, and portraits. She keeps them in a climate controlled storage room, safe from the harsh Minnesota winters.

This exhibition, Kelly hopes, will be the first of many. She has long-term ambitions for the collection. Last year, she enlisted the University of St. Thomas to include it in the school’s digital archive, along with other examples of George Floyd–related art. The archive allows people to access the pain and anger of last summer, said Todd Lawrence, a St. Thomas professor, when he began the project.

Kelly wants to rekindle that same angst in her patrons, most of whom are white, middle-aged, and with children. While people wander in, Kelly roams around the field, chatting with artists commissioned to paint more protest scenes. She checks in on the speakers hired to inspire the crowd’s fervor for racial justice. She introduces herself to mental health professionals, brought out to counsel people if they are triggered by boards. When Kelly finally reaches a stage in the middle of the field, a volunteer erects a sign advertising Memorialize the Movement’s corporate sponsors: Starbucks and the Minnesota Vikings.

“Interact with the space!” she encourages the gathering crowd before inviting her speakers up to the stage.

Most of the speakers are uncompelling. Their words form a sort of background narrative for the people pondering the fate of George Floyd. About 200 people let the words wash over them as they wander through the field and study the boards. The boards themselves are in pristine condition. Some still have pieces of paper reading “Yes, We’re Still Open” taped over the graffiti. It almost feels like being back at a Minneapolis rally in 2020, picking over the debris while an activist spills his guts into the mic.

One such activist is Marjaan Sirdar, a community organizer, who attempts to whip up the crowd’s passions. Sirdar runs through the events of last May, detailing George Floyd’s death, as well as every offense done to the minority communities of Minneapolis. As he speaks, his voice rises and he draws a crowd around himself.

“We’re here because some brave young people took to the streets and burned the goddamn city down,” Sirdar shouts, gesturing to the boards in front of him. “That’s why we’re here. Some of y’all wouldn’t have given two shits if the city didn’t burn.”

He jabs his fingers in the direction of a group of white women.

This is kind of a turn off. Some people look down at the ground. An elderly woman scoops up a young girl and walks away from the stage.

“Hmm, maybe we should head up to the square,” she says. “Maybe we can buy you a t-shirt up there.”

And indeed she can. Everything is for sale in George Floyd Square, which, since the incident last May, has become a popular pilgrimage site for racial justice tourists. You can buy almost anything with George Floyd’s name on it there: buttons, totes, t-shirts, flags, wristbands, street signs. You can even buy reproductions of some of the murals exhibited just down the street.

In the middle of the square, Angelo Mack, a Minneapolis entrepreneur, is selling 500-piece puzzles depicting the spot in front of Cup Foods where Derek Chauvin dropped his knee on George Floyd’s neck. Mack has other designs, too, all showing various points of interest from the riots last year. “The reason why I decided to do this is so that people can sit down after all this and continue to participate in the discussion,” he says. “To keep the movement going.” Not bad for $30 a pop.

George Floyd is well on his way to becoming little more than the name above a price tag, if he isn’t already. Kelly’s show is by no means uncommon. Chicago has hosted similar exhibitions, with similar bazaars outside. New York artists have, too—at least one in every borough. Washington, DC, has a show planned for the fall. In each city and with each collection, the idea is the same: celebrating the art of 2020 to keep its chaotic spirit alive.

But these shows always seem to devolve into cash-grabs. Today, a little further up the road from George Floyd Square, a man is selling more generic social justice items. He has Kamala Harris and Notorious RBG t-shirts. Black Lives Matter calendars. “I Can’t Breathe” hats. There’s no reason for any of this stuff to be here, except that these slogans and faces are standards of the movement. They have outlived any individual meaning that they may have once had. They’re just commodities now.