Corporatism is an American, Bipartisan Scourge

Matt Stoller's Goliath recalls when workers' rights became 'consumer advocacy,' and we all lost the language of anti-monopoly. 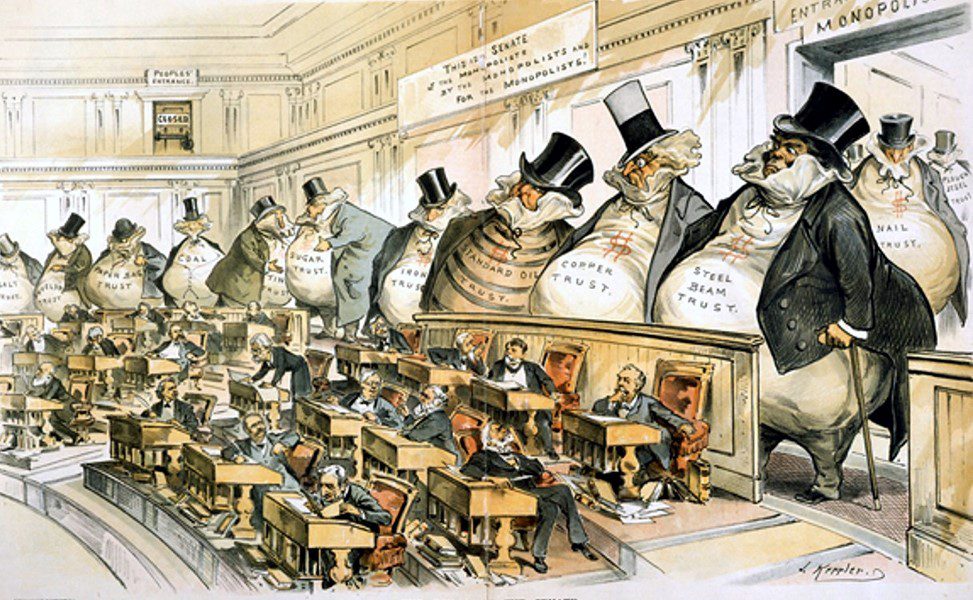 "The Bosses of the Senate" by Joseph Keppler (1889) (Wikimedia Commons)

The system isn’t broken; it’s working exactly as it was designed too. This lesson, above all, is the take-away from Matt Stoller’s Goliath, released in October.

His narrative of forgotten history covers the epic battle between concentrated financial power and the people’s representatives fighting back in the form of government. Stoller, an activist and think-tank fellow, is not exactly a reliable narrator in that he has a specific agenda to impart, but he has a theory of the case throughout the book and sticks to it.

The ills of modern society, government, and virtually all else are intrinsically linked to concentrated wealth and power in his view. It can be irksome at times to those who wish for additional nuance, but it helps instead to view this book as a Rosetta Stone for a long lost dictionary rather than a straight history.

Stoller’s knife-edged argumentation and relentless narrative drive is necessary to cut through the elite class’s years of neoliberal indoctrination and provide us instead a forgotten language to process the world around us. He reminds us that “our reality is formed not just of monopolized supply chains and brands, but an entire language that precludes us from even noticing, from discussing the concentrated power all around us.”

The book’s first half concentrates on the initial wins of American progressivism and its victors, from Theodore Roosevelt, Woodrow Wilson, FDR, and above all else Congressman Wright Patman. Patman is Stoller’s lodestar throughout Goliath, cast as a pure figure always on the right side of history fighting back against concentrated and wealth and its allies through legislative machinations and a penchant for speechmaking.

At times throughout the book a reader may begin to wonder why exactly any of these debates and battles even matter. Is big business and the concentration of wealth power really so detrimental to the American nation?

One of the most compelling answers to this question comes with a riveting history of the unwitting alliance between American monopolists and the Nazi regime in the years leading up to the outbreak of World War 2. Stoller recalls how the aluminum monopoly restricted supply of the necessary metal to inflate its price despite armaments manufacturers screaming out for more metal. Only after anti-monopolistic government intervention was the shortfall able to be made up.

Stoller also delves into the secret production compacts between American and Nazi producers delivering a timeless lesson that corporate giants will nearly always pursue profit above morality in their dealings with authoritarian regimes. The reader cannot help but draw a similarity between the modern-day economic entanglements of U.S. corporations and the Chinese communist party and not see the same problem on an exponentially grander scale.

The book’s most useful contribution to our current discourse lies in its second half, tracing the modern intellectual roots of free-market libertarianism and neoliberalism. Stoller lays out in detail how this ideology and its allies, like John Kenneth Galbraith, develop the pro-corporate view of the world that comes to dominate elites in both parties paired with the book’s final enemy: consumerism.

Our current predicament truly lies in the rise of consumer advocates over the old workers’ movement. Thanks to the likes of Robert Bork, the number of antitrust cases brought by the U.S. government tanked as corporate mergers were seen as cost-saving for consumer.

This pivotal shift was combined with a growing technocratic elitism amongst a managerial class who came to embrace the inevitability of economic progress and the worship of cheaper prices above all. The American worker be damned as long as prices are low!

It is in the conclusion, after we have become conversant in the language of anti-monopoly, Stoller sets his readers truly free by revealing the effective sameness between right-wing and left-wing corporatism. One promises corporate control as a sign of progress, the other as an inevitable feature of capitalism. He reminds us “they are both designed to sell you on the idea that you have no power, that you are nothing but a consumer.”

There is great freedom in realizing that corporatism is bipartisan. It frees you from the squabbles of the cable news syndicate, it frees you from the ideological bickering over who gets control of the American oligarchy, and it reminds you that there is power to wield beyond signing yourself up for misery as a member of the professional-managerial elite.

How often do those of us on the right get decried as anti-market fascists if we voice even the slightest concern about corporate control in our lives? We’ve been beaten over the heads for so long that we feel tinges of guilt for questioning whether it is alright to live in a country where a state government must lay itself prostrate at the feet of a company for daring to pass legislation that represents the will of its people.

It’s okay, you’re not alone. The libertarians may tell us that we’re anti-market, but as Stoller writes, “The real question is not whether commerce is good or bad. It is how we are to do commerce.”

Saagar Enjeti is Chief Washington Correspondent at The Hill.