Climate Change and the Disappearing Fisherman of Tangier Island

Rising water levels and a jaded younger generation are threatening a unique way of life. Can it be saved? 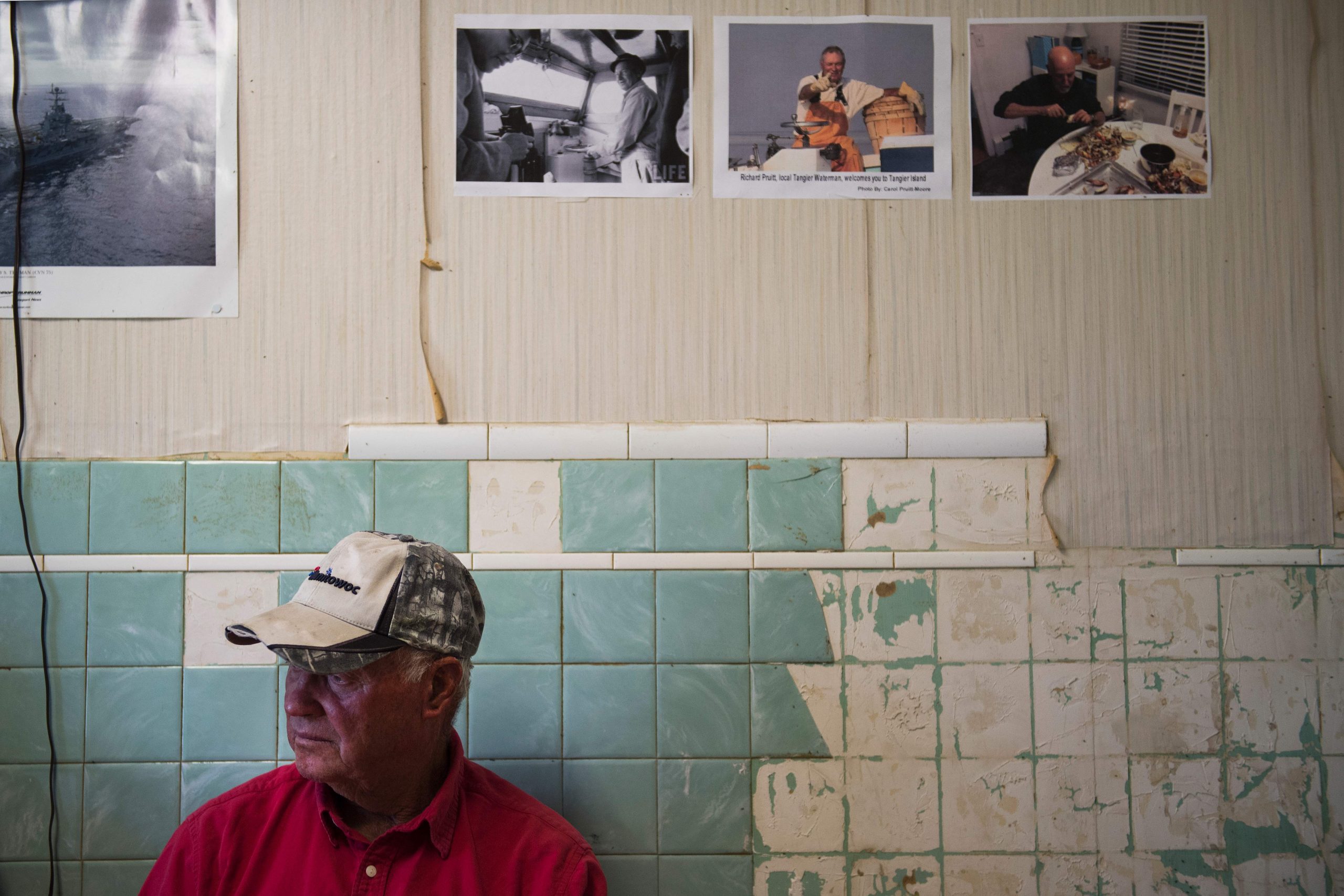 Waterman Richard Pruitt looks on a during a meeting called "The Situation Room" held with other senior local waterman in Tangier, Virginia, May 15, 2017, where climate change and rising sea levels threaten the inhabitants of the slowly sinking island. Now measuring 1.2 square miles, Tangier Island has lost two-thirds of its landmass since 1850. If nothing is done to stop the erosion, it may disappear completely in the next 40 years. / AFP PHOTO / JIM WATSON (Photo credit should read JIM WATSON/AFP via Getty Images)

Chesapeake Requiem: A Year with the Watermen of Vanishing Tangier Island, by Earl Swift, 2018, HarperCollins, 448 pages.

Imagine a place that has changed a lot since you knew it well—a field or an orchard that’s now a subdivision, or a small business on a little parcel that now holds an office park. Almost everyone knows the feeling of growing up near such a place or knowing one in childhood, only to come back years later and be shaken by the contrast.

Now imagine that even the land itself no longer exists. That is what it’s like to live on Tangier Island, a scrappy, culturally distinct community of no more than 700 people off the Virginia coast in the Chesapeake Bay.

Chesapeake Requiem: A Year with the Watermen of Vanishing Tangier Island, by veteran Virginia reporter Earl Swift, opens with a prominent Tangier woman exploring the marshy remains of what was, not too many years ago, a neighborhood. Where once there were homes and cemeteries, testifying to generations of proud Tangiermen, she could only find bits of debris—and the occasional human bone. Today, there’s even less.

At first, a watery grave might seem fitting for a population that is almost entirely employed in either crabbing or manning tugboats chugging up and down the Atlantic coast. But Tangiermen don’t live on the sea. They have a fierce attachment to their unique, threatened island, a very conscious sense of inhabiting the same land as their ancestors. (A proposal to move their entire population to more stable land was a complete non-starter; that isn’t Tangier anymore!) They put to shame those of us whose “sense of place,” such as it is, amounts to nostalgia for local diners or other commercial landmarks of relatively recent vintage. What do you do when your place literally ceases to exist? While the people of Chesapeake Requiem are proud Americans, their patriotism is not an abstraction.

It should be noted up front that the subtext of Chesapeake Requiem is climate change and its likely culpability for the sea level rise slowly swallowing up Tangier. That said, it is far from a political tract in favor of climate action. The vast majority of the book documents the Tangier people—who themselves tend to be climate change skeptics—and their anachronistic, endangered way of life. It is a very deeply conservative work, a meditation on the near-mystical meaning of a piece of earth and the hallowed folkways and traditions that develop in symbiosis with it. The Tangiermen are low-church, but their lives are sacramental.

Indeed, if the island becomes uninhabitable in a few decades, as many experts project, its brush with modernity will have been briefer than almost any place in the United States. Landlines were introduced only in 1966, and reliable electric service did not begin until 1977. (Tangier relies on landlines to this day, and for good measure their fire bells sound like World War II air-raid sirens.) The pitch most likely to save Tangier is an appeal not to its flesh-and-blood people, but to the island’s museum-like quality and unique variation on American waterman culture. And, of course, the crabs: the most, and the best, genuine Chesapeake blue crabs, especially soft-shells, come from a handful of male Tangier crabbers.

A few themes recur throughout Chesapeake Requiem: science versus folk wisdom, religion versus secularism, working hard versus working smart, attachment to place versus U-Haul, the tendency of distinctness and cultural pride to turn into a kind of paranoia and isolation, and the real meaning of environmental stewardship. Throughout the lengthy narrative, particularly the recurring yet never realized dream of a seawall that might stop the erosion, one is compelled to empathize with the Tangier people. They are stubborn, rough around the edges, and simultaneously resigned to bureaucratic sclerosis and sometimes naive about the possibility of cutting through it. Despite their shortcomings, they’re damned right, and what the bean counters in the environmental and engineering agencies see as ignorance—no, you don’t understand—they simply see as common sense. It’s no wonder Tangier voted overwhelmingly for Trump, whose willpower and bombast appealed to the island’s tendencies and frustrations. The seawall, still not forthcoming despite a personal call from Trump himself to Tangier mayor James Eskridge, was passed over by administrations as long ago as Carter and Reagan. The island continues to inexorably shrink, and no seawall is in sight.

A friend of mine who works in boating knows a few Tangiermen, and can confirm that Swift portrays them quite accurately. Tangier people are not highly educated and their world is small, but they are indomitable and proud workers. Swift writes that they “aren’t known for their eagerness to seek new and better ways to do things.” A tragic boat accident that left a 70-year-old crabber dead demonstrates this frustrating Tangier tendency. Ed Charnock, a “captain’s captain,” knew boats like an instinct—his second-nature handling of his doomed craft calls to mind the harrowing Apollo moon landing stories of switches and error codes, somehow expertly navigated under intense pressure. But Charnock hadn’t fixed one of his two emergency pumps, nor had he replaced the spongy boards in the boat’s bottom, which split apart in the rough seas. Nor, for that matter, had he bothered to spend a few hundred on an emergency locator. Charnock, and his would-be rescuers—all fellow crabbers in boats too small—nearly made up for their oversights through sheer work ethic. But not quite.

In photojournalist Chris Arnade’s formulation, Tangiermen are the quintessential “back row,” simple people with a certain canny folk wisdom and a love for their ordinary lives and places. They are deeply knowledgeable about their own ways of life, though they lack either the arrogance or the educated language to convey it to the agencies, bureaucrats, and other elite figures who have the power to save them.

The people are extremely religious—they observe the Sabbath nearly as strictly as Orthodox Jews—yet also extremely gossipy and prone to grudges and long memories. A chapter on the underbelly of Tangier—drugs, drunkenness, squatting in a growing number of abandoned structures—suggests an almost Wild West element in the culture. Tangier does not support the notion that religion makes people virtuous; it does support the idea that people benefit from the guardrails of religion.

Swift lived for a year on Tangier to work on Chesapeake Requiem. This book is not flyover journalism, nor does it belittle Tangier’s people or culture. It is difficult to do this kind of work and avoid sounding elitist, or “exoticizing” one’s subjects. Swift superbly humanizes them. While he occasionally pokes light fun at their stubborn habits or aspects of their fundamentalist faith, he handles them about as well as any secular left-leaning “mainlander” can. He clearly made an effort to understand them on their own terms—why they nearly withdrew from the United Methodist Church over a misinterpreted line in a national document about the Israel-Palestine conflict; how their intertwined faith and sense of place helps them to cope with the vagaries of island life; and, of course, their Republican politics and climate change skepticism.

It’s even tempting to think that we mainlanders aren’t really any happier than the Tangiermen—perhaps less so. Sociology and behavioral economics observe the “hedonic treadmill,” or the tendency of people to reach a sort of happiness equilibrium as long as their basic needs and a few comforts are met. So what if we have smartphones and they still remember getting their landlines? They have work, community, faith—meaning.

It is very easy to wax poetic about the hard work and simple virtues of these watermen, or of farmers or factory workers or other archetypes that loom large in our imagery of dignified blue-collar work. Yet few of us would dream of taking up that life; few Tangier youth even dream of it. During a high school graduation ceremony, many older Tangiermen expressed that they would rather see the new generation fully develop themselves than struggle through a difficult, relentless life on the water. Their world is larger and they have more options.

One can almost begin to think that what we call “culture” is a figment of an economic moment in time. But one cannot really believe that after reading this book. A society can go extinct and a culture can disappear, yet the same people, bereft of some part of themselves, can remain. Perhaps, to adapt Katy Perry, we’ll miss it more than we loved it.

And so we circle back to the climate question. There is a tendency on the Right to conflate the question of climate change itself with the policies proposed to counter it. Of course, these don’t actually have anything to do with each other. Shorn of its environmentalist subtext, read as an ethnographic work and a poignant recognition that everything changes, even the ground under our feet, Chesapeake Requiem works. But that subtext—one that should frankly hit conservatives hard—is that climate change isn’t a threat to “the planet” in some amorphous sense, nor is it a “global” problem. It is a threat to thousands of very local cultures and ways of life all around the world.

The fact that Tangier and its irreplaceable patrimony is sinking should alarm those who champion localism, rural and forgotten places, and the fantastic regional diversity of America. The fact that climate change is almost certainly the culprit should prompt skeptics in those ranks to rethink that question. In fact, climate change and disappearing ways of life might just turn out to be inseparable.