Adam-12 Was ‘Copaganda’—And Cops Should Emulate It

The midcentury procedural portrayed police as they wanted to be portrayed, but also as they should be. 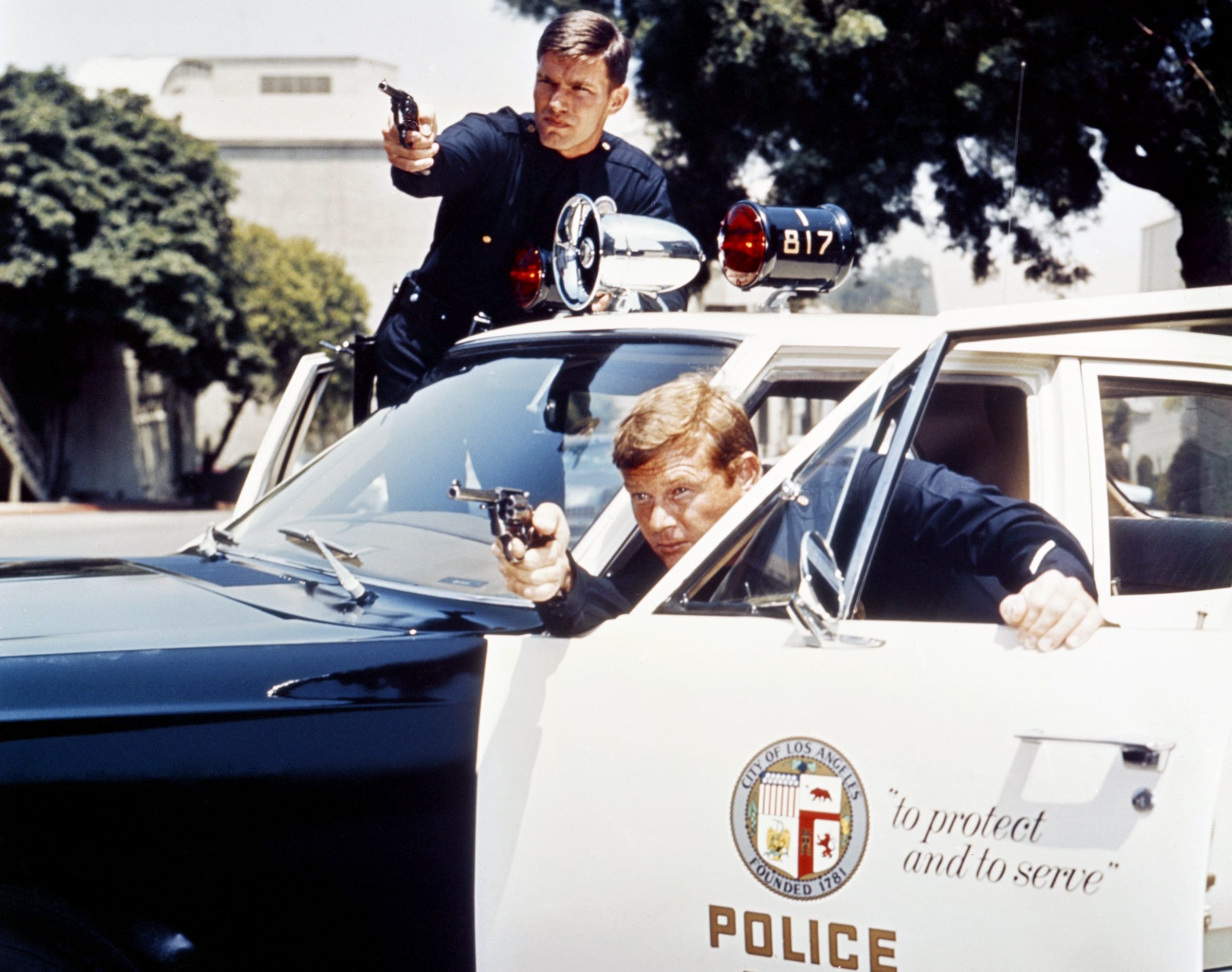 Martin Milner, US actor, and Kent McCord, US actor, both in costume as LAPD police officers, pointing handguns as they shield beside their police car in an image issued as publicity for the US television series, 'Adam-12', USA, circa 1972. The police drama starred Milner as 'Officer Peter J. Malloy', McCord as 'Officer Jim Reed'. (Photo by Silver Screen Collection/Getty Images)

It’s been a staple of television for decades: a dramatic or comedic show following the work of a pair of police officers as they go about their sworn duty to protect and serve.

From Dragnet to Police Squad (in color!) to NYPD Blue to The Wire to Brooklyn 99, the cop show has taken many forms. Some have merely used police as a more or less incidental backdrop to comedy (in the way that Irish cult classic sitcom Father Ted wasn’t really about religion or priests). Others have shown the darker and grittier side of police work, not altogether sympathetically. And some have managed to deal with serious issues, including critiques of police misconduct, with humor. In the wake of George Floyd’s murder, there’s been a lot of talk about canceling or reimagining cop shows. There’s also one worth watching anew: Dragnet’s late-60s, full-color cousin Adam-12.

The police procedural follows a pair of LAPD officers, veteran Pete Malloy and rookie Jim Reed, as they drive around late-60s Los Angeles responding to various, often humorous incidents, with a criminal encounter for the denouement. Like most midcentury television dramas, it was a fairly serious show that was also free of explicit content of any kind. Like Dragnet, its encounters and crimes were purportedly pulled from real police reports. And like most cop shows of its era, it casts the police in an almost entirely positive light (though the idealized LAPD of the show employs a mostly white force).

When a young officer with children is gravely injured and dies in the hospital, we are invited to mourn and to empathize with his family. Characters of all races and walks of life populate the show, from zany counterculture druggies to jumpy, inexperienced criminals to a group of young Mexican children who mob a passerby, mistaking him for the U.S. president. One would think some liberty has been taken with the incidents the officers respond to, and it probably has, though police, like priests, have seen almost everything.

Reed and Malloy never become angry, overreact, or shoot first and ask questions later. Routine stops never devolve into extrajudicial execution. They are skilled at deescalation, negotiation, and conflict resolution, and evince no hint of a militaristic mindset towards police work. When brutality or corruption occur—rarely—they are never tolerated or treated lightly—and never committed by the protagonists. When our officers do make a mistake, it prompts discussions on how to do better next time. The officers drive ordinary cars, not souped-up black Chargers, they carry ordinary service handguns rather than black rifles, and, of course, they wear blue, the origin of all the pro-police slogans riffing off that color. (Why, then, do the police prefer menacing black equipment today?)

Reed and Malloy are unswervingly patient, professional, and courteous, even to the criminals they arrest; in one episode, for example, a Latino boy turns himself in for an unsolved arson, and the officers thank him for being honest as they cuff him.

Wikipedia describes Adam-12 as a “realistic police drama.” Given what we’ve seen from the police only in the last month, that is rather like calling Pravda a disinterested journal of Soviet affairs. Those who know the full extent of police brutality and misconduct over the decades can hardly watch these midcentury procedurals without rolling their eyes. Such shows did not portray the police as they are, and not even necessarily as they would like to be. Rather, they portray the police as they would like to be portrayed.

And it’s not as if the producers simply happened to like cops. Real police departments have had formal and informal influence over their depictions on television. Dragnet, like Adam-12, was advised by the LAPD itself, and featured real LAPD buildings and cars. Adam-12’s end credits even include a brief frame that reads: “Technical advice for the filming of Adam-12 came from the office of Chief Thomas Reddin, Los Angeles Police Department.” What, exactly, “technical advice” consisted of is uncertain, but it would be naive to think that it referred only to portraying the proper make and model of a squad car or service pistol. Kent McCord, who played Jim Reed, gave an interview in 2016 that revealed some of these details. Most of the police involvement was overtly technical, but the relationship between the producers and the department was close enough to allow for informal influence. At The Atlantic, Conor Friedersdorf wrote at length about the LAPD’s essentially propagandistic role in Dragnet’s police portrayals, taking exemplary police work and presenting it as the norm to the producers. The murky but very real influence of police departments on police-themed TV shows is not unlike the pervasive and longstanding influence of the military-industrial complex on movies and video games, and their largely positive or at best uncritical portrayals of war and weaponry. In his interview, McCord adds that Adam-12 episodes were actually used as training videos for police departments around the country. It would seem there was sincerity and idealism mixed with self-promotion.

Though it’s worth noting that the LAPD is the same department that inspired N.W.A.’s “Fuck Tha Police.”

Author Douglas Rushkoff wrote, in his 1994 book Media Virus! Hidden Agendas in Popular Culture, that Adam-12 “marked the last gasp of this righteous style of cop TV.” Yet “it was as if the world was laughing at the ‘straight’ roles these cops had to play in an increasingly un-straight world….‘to protect and serve’ meant to acknowledge and permit a certain amount of bizarre activity in early seventies Los Angeles.”

It is easy to assume, if you don’t know very much history, that this all changed with the crack epidemic or when the Bush-era Middle East wars blew back in the form of desert-tan military equipment in the hands of cops. But the police needed to be forced to give Miranda warnings all the way back in 1966—two years before Adam-12’s first episode. The police beat civil rights protestors, and throughout the late 19th and 20th century, they permitted and in some cases participated in lynchings of black men. Bull Connor’s brutal officers didn’t deploy tanks and carry M-16s. Dressing the police like Reed and Malloy, although it would be a good start, will not turn copaganda into documentary. That requires a reckoning with racism and institutional culture, and a much more substantial set of reforms.

Shows like Adam-12 were produced with good intentions, and they made it easier for young people—certain young people, anyway—to admire the police and perhaps to seek a career in the force. In 2015, following the death of Martin Milner, who portrayed Malloy, LAPD Chief Charlie Beck put it this way: “As you watch any of the ‘Adam-12’ episodes, you see professional, compassionate, internally driven, hardworking, clean-cut, impeccably tailored, fit Los Angeles police officers—those police officers that have no dark side, that do the right things for the right reasons every time. And that is the image that drew us all to this place.”

It’s no surprise cops like Adam-12. It’s a good show, and it certainly portrays two ideal officers and a clean, professional department. Real-life police departments could do worse than supplementing their training videos, once again, with a few episodes.