Traditional Development Is a Municipal Gold Mine 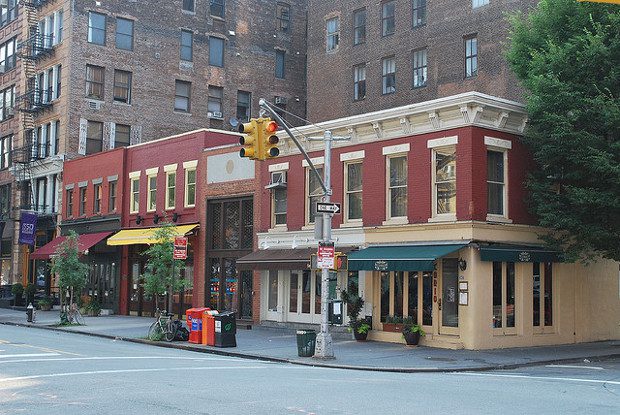 In the United States, cities have spent the past 60 years reconfiguring public spaces to be oriented around the automobile. When new places are built, regulations require that they be similarly designed. The largely unchallenged assumption behind this approach, especially when it comes to commercial property, is that the more cars driving by, the more successful a place will be. Is this true?

If we look at it from the perspective of a local government, that assumption becomes highly suspect. Auto-oriented development costs more to maintain and provide service to than walkable alternatives. At the extreme, Detroit’s fiscal problems are a symptom of having too much stuff–too many miles of streets, pipes, curbs, and walks–and not enough people. If the city were half its current size but had the same population and tax base, its financial problems would be much more manageable. That is intuitively obvious.

It is the other side of the equation–a city’s revenues–where things are not as clear. Cities seek the Wal-Mart out on the edge of town not because it is cheap and efficient to provide services to–it clearly is not–but because they believe it produces such great returns, such tremendous wealth for the community. Wal-Mart pays a lot of taxes. What city wouldn’t want that?

Such a simple thought process does great injustice to our cities and the taxpayers forced to support their operations. It isn’t raw size that matters but productivity: how much revenue is produced per increment of cost? In that prism, the auto-oriented approach to building fails miserably.

Highway 210 runs east/west through the downtown of Brainerd, Minnesota, my home town. This used to be the streetcar route in a different age, but the hope of progress along with federal transportation subsidies prompted us to abandon that line years ago. The highway abuts a traditional neighborhood that has since struggled. In particular, along the highway were three commercial blocks built in the traditional style, with the single-story buildings pulled up to the street presenting a dilapidated front to the passing traffic. It is one of the most unpleasant stretches of development within the city.

In an effort to clean up this part of town, the local government planned for the redevelopment of this section into something they identified as “auto oriented.” In recent years they have been able to convert one of the blocks entirely, replacing the blight with a brand new drive through restaurant. The new facility has two lanes, a large parking lot, a fancy sign, and a shiny façade. Locally, the belief that this is an improvement is a fairly universal one.

Unfortunately, the math doesn’t justify that belief. The new taco joint has a total value of $618,500. Two blocks over, using the same amount of land and having the same amount of public infrastructure, the collection of old and blighted structures has a total value of $1,104,500. The block the city is trying to have torn down is, in its dilapidated state, providing them 79 percent more tax base and property tax revenue than its shiny, new, auto-oriented replacement.

How is this possible? How is it that a collection of tiny shacks built nearly a century ago are worth so much more than the brand new development on the same acreage just up the street? The answer is revealed over and over and over and over and over again when one looks at the financial productivity of different land use patterns: the traditional development approach is a cash cow. On a per-foot or per-acre basis, it is vastly more productive financially than anything being built in an auto-orientation. Taxpayers get far greater returns when places are scaled to people instead of cars.

There are a lot of implications to this insight and a lot of areas to explore as a result–including sales tax and job creation, both of which also come out ahead in traditional approaches–but there is one thing that must be clearly understood: recreating that old and blighted block and all of its financial productivity is illegal today. The local zoning codes, which–mandated or inspired by state and federal guidelines–require setbacks, coverage limits, greenspace, excessive parking and minimum floor/area ratios, prohibit building in the time-tested, traditional building pattern. Even if people wanted to build something that was more financially productive–and many people do–it can’t be done.

Through regulations that reinforce false notions on how wealth is created, American cities have mandated their own financial demise. The first step to turning things around is to remove barriers that prevent incremental development in the traditional style. Any local government serious about their community’s future prosperity is taking this inexpensive step in earnest.

Charles L. Marohn, Jr. PE AICP (@clmarohn) is a licensed engineer, a professional planner and the president of the non-profit Strong Towns. His latest book, A World Class Transportation System, is now available on Kindle.