'Tis the season for military action ahead of a tight presidential election. 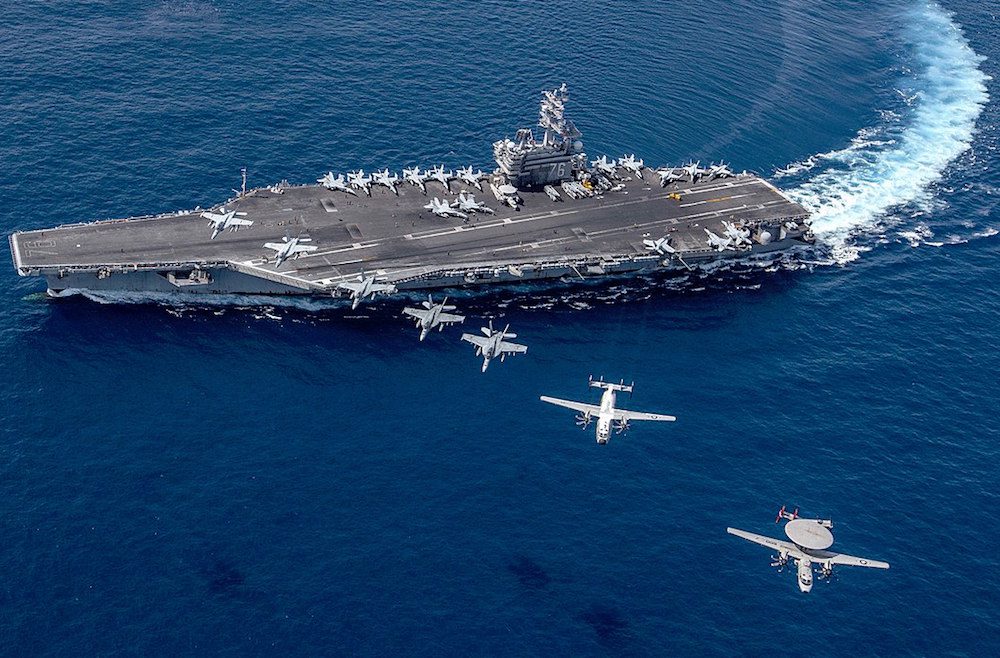 The recent sending of two U.S. aircraft carriers into the South China Sea for military exercises is not unprecedented, but could portend danger in this election season.

With history as a guide, nations around the world are usually careful about giving a U.S. president any excuse for military action during an election year, especially a chief executive with weak poll numbers and an especially fervent zeal for re-election.

But this president clearly plans to demonize China to score points with his electoral base and foreign policy hawks. Trump has been intent on a trade war with China since the beginning of his presidency, has alarmed the American public by warning of the national security implications of Chinese communication companies’ possible penetration of the American market, and blamed the Chinese government for the origin of the COVID-19 pandemic. In the past, when Republican or Democratic administrations have demonized foreign leaders—for example, Muammar Gaddafi of Libya during the Reagan administration, Slobodan Milosevic of Serbia during the Clinton administration, and Saddam Hussein in the George H. W. Bush, Clinton, and George W. Bush years—a U.S. military attack eventually followed.

China certainly bears blame for its political crackdown in Hong Kong, its internment of perhaps a million Uighur Muslims in the northwest part of its country, its general human rights record against domestic dissent, and its overly expansive territorial claims in the South and East China Seas. Yet China, as a nuclear weapons state with a rapidly rising economy, predictably wants to be treated as a great power and to have a sphere of influence in neighboring regions for security purposes. In contrast, the United States, as a status quo superpower that had previously been enjoying a “unipolar” moment, is used to getting its way in the world and is equally as predictably uneasy about giving China even a security zone around its borders.

Historically, the interactions between rising and status quo powers often end in war. Graham Allison, in his book, Destined for War: Can China and the United States Escape Thucydides’s Trap? demonstrates that such interactions have led to war in 12 cases out of 16 instances since the 1500s. Upon my closer examination of the relevant cases that didn’t end in conflict—status quo Britain and rising United States in the later 1800s and status quo United States and rising Soviet Union during the Cold War—several factors jump out. Britain and the United States had a vast ocean separating them, mitigating existential security concerns, and had a robust trading relationship, at least raising the costs of an all-out war. However, some close calls did arise. During the Cold War, although the parties didn’t have a significant commercial relationship, they were separated by significant distance over water (except for their sparsely populated regions of Siberia and Alaska) and both had arsenals of thermonuclear weapons.

These three factors are present in the U.S. relationship with a rising China and can act as a brake toward catastrophic large-scale war. The countries are separated by an even bigger ocean than were the U.S. and Britain during the later 1800s; geography still matters even in the modern, interdependent world, and the broad Pacific Ocean forms a formidable physical barrier to amphibious invasion or sustained, high-volume conventional air attack. The two countries also have significant nuclear weapons arsenals to deter such conventional, an also nuclear, attacks. Finally, unlike the U.S. and USSR, the United States and China have a well-developed commercial relationship that raises the costs of going to war.

Of course, these three mitigating factors only give both countries a leg up on avoiding war; their respective outlooks will also need to change. China should reconsider its expansively absurd territorial claims in the South China Sea. Does a great power need to be so insecure about which nation owns rock outcroppings in the middle of the sea, even if it is to claim oil and gas deposits near them? However, because most Americans take cues from their government, rather than trying to look at the U.S.-China relationship objectively, my recommendation that the U.S. needs to look even deeper into its international behavior than does China might be met with incredulity. However, it might be wise to look at the U.S.-China security jousting from the Chinese perspective.

Although it is obvious that authoritarian China has a much worse record on human rights than does the democratic United States, empirical evidence shows that this has little relevance to aggressive international behavior. Democracies are not less aggressive than autocracies—for example, ancient democratic Athens was much belligerent than militarized and authoritarian Sparta. The democratic United States currently has alliances and foreign bases ringing China in East Asia; China does not have troops or military bases in Central America or the Caribbean. Unlike the significant U.S. naval presence in the seas near China, China does not have any naval presence off any U.S. coast.

The United States should pull back its current “far forward” security perimeter, as the British did in the Western Hemisphere around the turn of the 20th century, to give a rising China a security sphere near its borders and in nearby seas. Like many small countries near great powers, that may require some small countries to make some accommodation to China. Alternatively, if China begins to seriously threaten other countries in East China, they—including countries richer than China in per capita wealth, such as Japan, Taiwan, South Korea, Australia, and New Zealand–could band together and become the first line of defense. The United States then could assume a “balancer-of-last resort” posture, coming to their aid only if the balance of power in the region deteriorated greatly in China’s favor.

With massive budget deficits, a $26 trillion-plus national debt, and loads of domestic problems, instead of getting involved in petty East Asian territorial disputes using U.S. aircraft carriers, the United States has the luxury of recognizing China as a great power and letting it rise peacefully, instead of using outdated Cold War containment strategies.