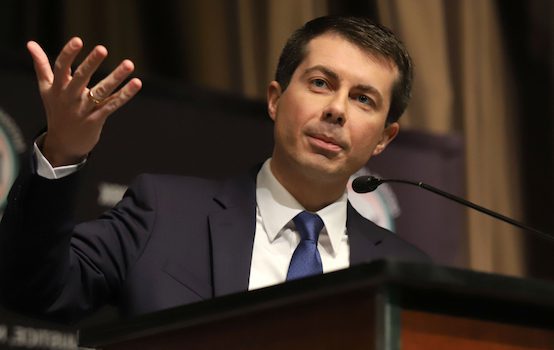 And then there were six* (counting, unlike the networks, Tulsi Gabbard). Former South Bend, Ind. Mayor Pete Buttigieg followed Tom Steyer out of the Democratic presidential race, leaving a half dozen major candidates left. Buttigieg was the first to drop out who actually had a realistic reason to get into the primaries in the first place since Senator Kamala Harris.

Like Harris, Buttigieg moved left when that seemed like the most promising path to the Democratic nomination and then tacked back to the center when former Vice President Joe Biden stumbled out of the gate. Harris paid an immediate price, Buttigieg stayed competitive through Iowa (which he narrowly won, at least under their byzantine rules) and New Hampshire (which he narrowly lost). But as soon the states voting became racially diverse, he fell back toward the middle of the pack. He finished a very distant third in Nevada and dropped into the single digits in South Carolina, where Biden finally notched a win.

Online progressives weren’t Mayor Pete fans, seeing the first serious LGBT presidential contender as a phony. But what ultimately did him in was his virtually nonexistent Latino and especially black support. This was despite Buttigieg’s shameless copycatting of Barack Obama, mimicking the former president’s style and even lifting some of his phrases. Buttigieg simply did not have a diverse enough coalition to win the Democratic nomination, and the pragmatic white Democrats who supported him had to wonder if he would be able to turn out minority voters in November if he somehow did.

The Democratic nomination will go to the candidate who can put together a multiracial centrist coalition, as Biden did in South Carolina and as former New York City Mayor Michael Bloomberg hopes to do on Super Tuesday, or the one who assembles a multiracial progressive coalition. Senator Bernie Sanders seems best situated to do the latter, after struggling to win communities of color in 2016. Sanders appears to have strong support from Latinos as California and Texas get ready to vote, while younger blacks also cast their ballots for the socialist. Sanders still lost the African-American vote in South Carolina by 44 points while Bloomberg’s bid to appeal to black voters looks shaky despite some encouraging early poll numbers.

We do know, however, that white moderate suburbanites and woke social liberals aren’t sufficient to win. Mayor Pete showed us.

UPDATE: Now the Democratic field is down to five, as Senator Amy Klobuchar has suspended her campaign and will reportedly endorse Biden. Is the great centrist consolidation upon us?