Home/Articles/Film/Sister Outsider: ‘Beyond the Hills’

Sister Outsider: ‘Beyond the Hills’ 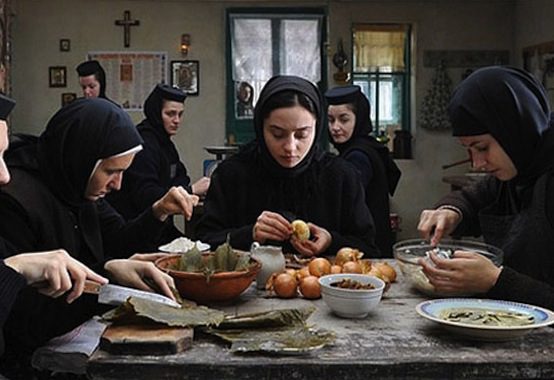 “Beyond the Hills,” the wrenching new movie from Romanian director Cristian Mungiu (“4 Months, 3 Weeks and 2 Days”), is easy for American audiences to misunderstand. The Washington City Paper‘s review thinks it’s about the sufferings of an unbeliever trapped “within a world of intolerance.” It’s about “a battle between salvation and love.” This is badly missing the point.

“Beyond the Hills” is about two young women, Voichita and Alina, who grew up together in an orphanage. When they aged out of the orphanage Alina left the country, going to Germany to find work, while Voichita entered an Orthodox women’s monastery. The movie begins when Alina returns, ostensibly to visit Voichita but actually to rekindle their (apparently lesbian) relationship and persuade Voichita to leave the nuns. The movie is at least somewhat “based on a true story” about an exorcism gone wrong, so you know that this visit will end very, very badly. But the portrayal of faith and love in “Beyond the Hills” is complex and far more challenging than a mere clash between misunderstood secular girl and intolerant religious nuns.

Lots of discussion below the cut, including some spoilers.

The movie was co-produced by the Dardennes brothers of Belgium (“Kid with a Bike,” “The Son,” “Rosetta”) and their influence shows in the long takes, precisely-framed shots, and intense attention to hard physical work. Like the Dardennes brothers, Mungiu knows how to make this style suspenseful, totally compelling–you can’t look away.

The lead actresses are phenomenal. Cosmina Stratan as Voichita is lovely, delicate and childlike, but she has an unexpectedly persistent force of will. Cristina Flutur’s Alina is permanently affronted and suspicious. She’s been deeply damaged, and her love for Voichita is mostly possessiveness. She’s jealous and unable to trust; even when she gets her way (which to some extent she does many times in the earlier parts of the movie) it isn’t enough for her, she keeps testing boundaries and demanding more, unwilling to accept any sign of love from Voichita except rejection of the monastery. From very early on we can guess that Voichita will fail her–in the opening scenes Alina is exhausted as they trek uphill toward the monastery, but Voichita doesn’t offer to help or carry her bag–but what happens is even worse than what we might expect.

The director himself views Alina as “generous and devoted to her friend,” and principled in her opposition to the monastery and its religion, but for me as a viewer these characteristics were swamped by her jealousy. I do think she genuinely believes the monastery is harmful to Voichita–“How did he mess you up so badly?” she exclaims about the priest, and suggests that he had sex with Voichita. But her evidence for the claim that the priest hurt Voichita is just that the nun doesn’t want to be her lover anymore, and wants to stay at the monastery.

The other nuns are mostly undifferentiated, twittering and fearful, deeply distressed by Alina’s presence among them. They’re almost a part of the natural world, like the dogs who bark more in the background as the film’s events accelerate. (As with the rest of the movie’s events, there’s a natural explanation for this–dogs can obviously pick up on human emotional agitations–but the supernatural explanation isn’t categorically rejected.) The monastery’s priest is trying to manage this volatile situation, and throughout the movie he gets talked into everybody else’s bad ideas.

The climactic, excruciating bad idea is a days-long exorcism of Alina. This is something Voichita begged for, and the language she uses (assuming the subtitles get this right) is startling. In previous scenes we’ve seen Alina essentially trying to game the monastery’s system, going through the required penances and prayers so that she can be with Voichita; she’s spoken of God in transactional terms. And when the desperate Voichita asks, “If Father reads [the exorcism service] for her, she’ll get better?”, she’s echoing this same transactional language.

The ensuing exorcism is horrific–and the movie shows the nuns lying to cover up the truth about it, as the mother superior justifies herself in language which sounds exactly like what you’d say if you were abusing children. The mother superior focuses on who is at fault for Alina’s suffering (the Devil–not me!) and argues that Voichita’s doubts “take away our strength to do this.” The movie contains within itself plenty of criticism of the actions taken by the monastery–but it also shows you why those things happened, and the answer is not “because religion is irrational and evil.”

This is a deeply compassionate, painful, and thoughtful film. It creates a dilemma with no evident solution: If you think Voichita “should” leave with Alina you’re ignoring the frightening and potentially abusive nature of Alina’s clutching, fiercely possessive love. If you think Alina should just get proper psychiatric treatment (which seems to be the City Paper‘s reaction) you’re ignoring the fact that she does get the psychiatric treatment that’s available to her, and it is neither all that helpful nor all that caring, nor does it address her actual desires. Alina can’t stay at the monastery but, as Voichita points out with increasing misery, if she leaves she (and Voichita, if she decides to go with her) will have nowhere else to go.

I don’t think “Beyond the Hills” is a “message movie.” But to the extent that its central dilemma can be captured as “love of God, or love of another person?”, it comes startlingly close to choosing the first thing. (The situation is much less clear-cut than that, both because there are no solutions or right choices and because Voichita herself is trying to love both God and Alina. She, too, loves too much to let go.) The central drama is not solely about Alina’s needs and suffering but the effect these things have on Voichita’s faith. Voichita’s choices drive the climactic events of the movie. She is a powerfully tragic character; and “Beyond the Hills” is one of the great spiritual dramas.