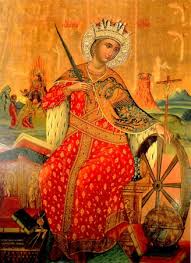 Just as they have done for 17 centuries, the Greek Orthodox monks of St. Catherine’s Monastery in Egypt’s Sinai desert and the local Jabaliya Bedouins worked together to protect the monastery when the 2011 revolution thrust Egypt into a period of uncertainty. “There was a period in the early days of the Arab Spring when we had no idea what was going to happen,” says Father Justin, a monk who has lived at St. Catherine’s since 1996. Afraid they could be attacked by Islamic extremists or bandits in the relatively lawless expanse of desert, the 25 monks put the monastery’s most valuable manuscripts in the building’s storage room. Their Bedouin friends, who live at the base of St. Catherine’s in a town of the same name, allegedly took up their weapons and guarded the perimeter.

The community’s fears of an attack were not realized, but the monks decided they needed a new way to protect their treasured library from any future threats. Last year, they accelerated a program of digitally copying biblical scripts with the help of multispectral imaging specialists from around the world, while simultaneously renovating and modernizing the library itself.

The project to digitize the manuscripts at the monastery has been going on for many years thanks especially to the work of Fr. Justin, and it’s good to hear that it will be sped up. This should serve not only as insurance against possible damage to the manuscripts, but it will also gradually make more of the monastery’s holdings more widely available to believers and scholars alike. Fortunately, the monastery has so far been spared the violence and upheavals that have afflicted other parts of the Sinai and Egypt, and I very much hope that it continues to be kept safe.

As Cher explains, the Bedouin living near the monastery have a long association with the monks:

The Greek Orthodox monks and the Jabaliya Bedouin tribe, who are the area’s majority residents, have shared land, food and friendly relations since the monastery was built centuries ago. The Jabaliya are believed to be descendants of the Byzantine soldiers who built the monastery in the 6th century, and many of them continue to guard the monastery as their own. “The monastery is a very special place for me and all Bedouins. It is a holy place for all religions. Our ancestors built St. Catherine’s,” explains Ramadan, 26, who has been a tour guide at the monastery since he was 15.