Ryan has an almost family-like devotion to the Republican party, and so the struggle here for him is difficult in the way that family dramas are often difficult. The question I imagine he is weighing is how to mitigate damage to the institution. Is it better to back Trump in the name of unity and harmony? Or better to oppose Trump—or at least decline to support him, which amounts to the same thing—in the name of preserving the party’s identity, and in hopes of better positioning both himself and the party for whatever comes next?

Ryan and Trump are set to meet on Thursday of this week in order to talk things over, so this drama may end soon. And at this point, I think the outcome of that meeting could go either way, with Ryan backing Trump, or with him stepping down from the convention and declining to endorse the GOP nominee.

One factor that isn’t mentioned here is the relative popularity of Ryan and Trump with Republican voters. Because Ryan is now Speaker, he is one of the main members of a distrusted Republican leadership in a deeply loathed Congress, and that has had a significant effect on how Republicans nationally view him. His favorability ratings dropped once he took the job after Boehner’s resignation, and more Republican primary voters view him unfavorably than favorably: 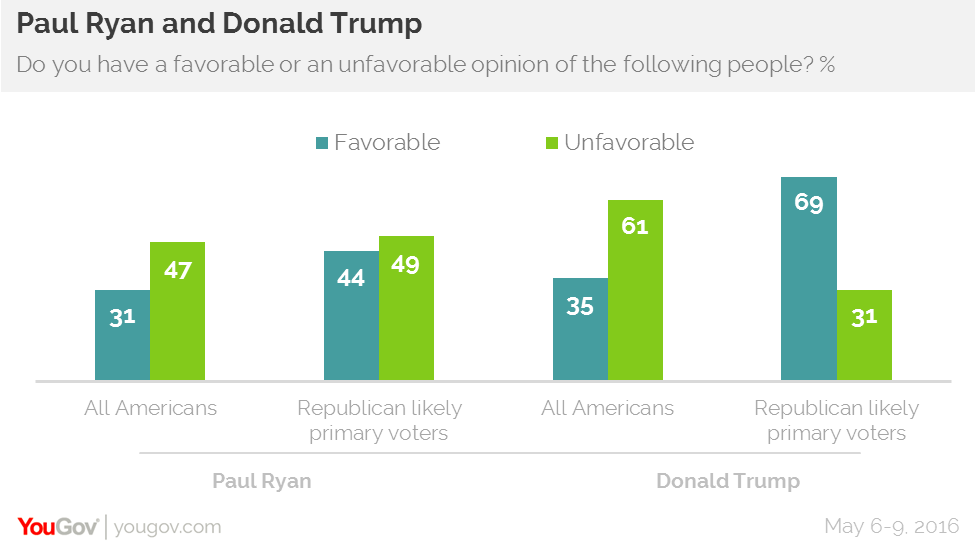 As you can see from the graphic, Ryan isn’t all that popular with Republicans or non-Republicans, but Trump is viewed as favorably by a large majority of the party’s primary voters as he is disliked by most of the rest of the country. That’s not new or surprising, but the gap between Trump’s ratings and Ryan’s among Republicans may help explain why the Speaker is being so coy about his position. On top of that, “GOP voters disapprove of how Ryan is handling his job as Speaker of the House by a margin of 49% to 37%.” Coming out against Trump now is certain to turn more Republicans against him across the country.

Ryan can’t immediately throw his support behind Trump without horrifying his fans in Washington and certain conservative media outlets, but he can’t be seen as a leading opponent without risking even more hostility from the bulk of Republicans nationwide. So of course most Republican primary voters think Ryan should endorse Trump: most of them like Trump, and about half don’t like Ryan. Just 16% of Republican primary voters think Ryan shouldn’t endorse Trump, which reflects the overall weakness of the die-hard anti-Trump faction. It’s no wonder Ryan hasn’t been eagerly seeking political martyrdom on their behalf.

We worked tirelessly to turn around the city's most violent neighborhood, only to see it burned and looted.
Corey Brooks June 4, 2020