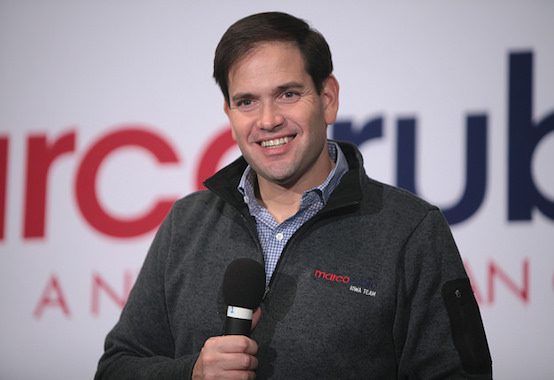 Marco Rubio rushed to the president’s defense this morning by showing off how little he knows about everything:

It takes a truly oblivious person to accuse someone of hyperbole while comparing a non-proliferation agreement to the appeasement of Hitler, but then this is Rubio we’re talking about here. Rubio has to be so thoroughly ignorant of what “Munich” means that he can’t be taken seriously, or he is such a fanatical ideologue that his analysis can’t be trusted. Suffice it to say, an agreement that requires Iran to make significant concessions for decades on pain of punitive sanctions does not amount to anyone appeasing them. One will look in vain for the territories that Iran is allowed to absorb as a result of the deal. Iran has accepted restrictions on itself that it didn’t have to accept so that it could be freed of international sanctions. If anything, Iran is the party that has appeased the others that negotiated the agreement.

Hard-liners have labeled the negotiations with Iran as a new Munich or “worse than Munich” for years. This has just confirmed how little they know about history and how ideologically hostile they are to any kind of diplomatic engagement. Denouncing the JCPOA as the “21st century equivalent to Munich” is just about the crudest, most ignorant fear-mongering conceivable. It is a measure of how intellectually bankrupt the case against the deal really is that this is what its opponents keep using. It is also a reminder that Rubio’s foreign policy judgment is terrible.

I have often wondered how Rubio acquired the undeserved reputation for being some sort of foreign policy expert in the Senate. As far as I can tell, if a politician talks about a subject enough with enough enthusiasm and toes the right ideological lines, he doesn’t have to demonstrate knowledge of anything he’s talking about. Especially on foreign policy, a politician is granted “expert” status just by taking an interest in the issues that his colleagues tend to ignore. This is probably how Rubio’s fellow fanatic Tom Cotton earned the title of “leading Iran expert” in a recent news article despite having no particular expertise in the country and a record of distorting and misrepresenting the contents of the nuclear deal. I suggest that everyone stop treating fear-mongers and warmongers as “experts” just because they like to denounce certain foreign governments with strong language.