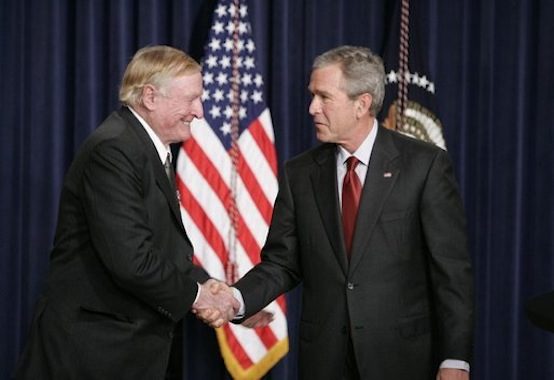 Some movement conservatives are greatly inflating the Trump threat to conservatism:

Conservative intellectuals have become convinced that Mr. Trump, with his message of nationalist-infused populism, poses an existential threat to conservatism [bold mine-DL], and plan to issue a manifesto on Friday to try to stop him.

If they really believes this, they are giving Trump too much credit. The worst-case scenario for an anti-Trump Republican is that Trump is nominated and goes on to win, but even if that happened it wouldn’t be an “existential threat to conservatism” for a few reasons. First, if conservatism in this country still has anything worthwhile to offer (and obviously I think it does), it isn’t going to disappear or be killed off because of the election of a loudmouthed billionaire. A Trump election could even be a good thing for conservatives if it finally forces movement conservatives to break their habit of identifying closely with the GOP and frequently deferring to the party’s political leaders. It has been decades since most conservatives had an adversarial relationship with a Republican president, and anything that forces conservatives to act less like party apparatchiks can’t be all bad. Of course, being in opposition doesn’t win you the access and connections with the administration that many movement conservatives have become accustomed to having when the GOP controls the White House, but it usually forces you to make sharper and better arguments. If Trump is nominated and goes on to lose (the far more likely scenario), the threat to conservatism is even smaller. Trump critics will be able to point to the defeat and claim some measure of vindication: they said Trump wasn’t electable on his platform, and they were right.

I don’t think that this “manifesto” is going to achieve much, but then these writers are unintentionally confirming some of what is wrong with movement conservatism by issuing one. One of the things that Russell Kirk said distinguished conservatives was that they didn’t issue manifestoes, but then the sort of conservatism he was talking about was a temperamental and philosophical one that has less and less to do with what defines the conservative movement today.

The same report supports my guess that many Republican elites will end up preferring Trump over Cruz as the contest turns into a two-man race:

“We can live with Trump.” said Richard F. Hohlt, a veteran lobbyist, reflecting the sentiment of his colleagues at last week’s meeting of the Republican National Committee in Charleston, S.C. “Do they all love Trump? No. But there’s a feeling that he is not going to layer over the party or install his own person. Whereas Cruz will have his own people there.”

The people siding with Trump over Cruz may also be overstating the disaster that awaits the GOP if Cruz gets the nomination, but it is easier to see how Cruz would be even less competitive than Trump in many parts of the country. Cruz fits the profile of a factional candidate much better than Trump, and he is personally more grating and off-putting. Insofar as Cruz is perceived to be the more ideological and more extreme of the two, that probably makes him weaker as a general election candidate. This won’t be a question of choosing between a nominee who can win and one who will lose, but between a tolerable loss and a major defeat.