Israel, Palestine, and the GOP Platform The Republican platform plank on Israel and Palestine has been revised:

Rejecting policy both American parties have embraced for decades, the Republican Party moved Monday to approve a platform that does not include a call for a two-state solution to the Israeli–Palestinian conflict.

It is unfortunate that the GOP did this, but the truth is that this is where most “pro-Israel” Republicans have been for at least the last ten years. The revised plank is a symbolic repudiation of the consensus view on how to resolve the conflict between Israelis and Palestinians, and it reflects the extent to which the GOP as a whole has become an overt backer of the most hard-line Israeli policies.

As a two-state solution has become increasingly unlikely in the near term, “pro-Israel” hawks have generally come around to an aggressively pro-settler and pro-occupation position. Hawks here in the U.S. are at least as hard-line on these questions as their Israeli counterparts, and sometimes more so, and if anything Trump has been even more blunt about this than previous nominees. McCain and Romney paid lip service to a two-state solution, but neither had the slightest interest in pursuing it, and with Trump all pretense of support for that outcome has been cast aside. That has happened partly because of Trump’s own preferences, but it also reflects what most Republicans say they believe.

As we can see in the chart from an April 2016 Pew survey, most Republicans don’t think a peaceful two-state solution is even possible. It is likely that most of those people don’t think it is desirable.

The plank also commits the GOP to a fantasy: “We reject the false notion that Israel is an occupier.” This is a bizarre position to take, since Israel is undeniably occupying territory that does not belong to it and ruling over its stateless inhabitants. It is nonetheless consistent with a view that says that Israel does nothing wrong and shouldn’t be criticized even if it did. The plank predictably affirms the wrongheaded, destructive view that there should be “no daylight” between America and Israel, which implies a level of agreement and identity of interests that isn’t possible between any two governments.

Possibly the weirdest part of the new plank is the claim that support for Israel is an “expression of Americanism.” That may be the worst example of confusing the interests and identities of the two countries that I have ever seen. The language of this plank puts Republicans further at odds with the rest of the country on this issue, and it commits them to supporting policies that serve no American interest while indulging the worst behavior of a reckless client state.

The full text of the platform plank can be read below: 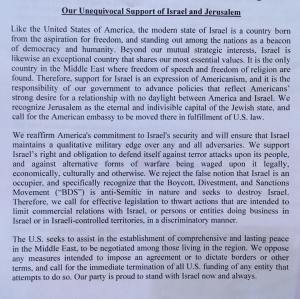